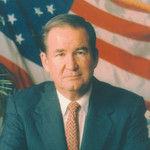 Patrick Buchanan < Back to Voices

From 1966 through 1974, Buchanan was a confidant and assistant to Richard Nixon. From 1985 to 1987, he was the White House Director of Communications for Ronald Reagan. In 1992, Buchanan challenged George H. W. Bush for the Republican nomination and almost upset the president in the New Hampshire primary. In 1996, he won New Hampshire and finished second to Sen. Robert Dole with 3 million Republican votes.

Buchanan was born in Washington, D.C., educated at Catholic and Jesuit schools, and received his master’s degree in journalism from Columbia in 1962. At 23, he became the youngest editorial writer on a major newspaper in America, The St. Louis Globe-Democrat.

In 1966, Buchanan became the first full-time staff member in the legendary comeback of Richard Nixon. He traveled with the future president in the campaigns of 1966 and 1968, and served as special assistant to the president from his first day in office through the final days of Watergate.

On leaving the White House, Buchanan became a columnist and founding father of three of the most enduring talk shows in TV history: “The McLaughlin Group,” CNN’s “Capital Gang” and “Crossfire.” In 2002, he joined MSNBC where he remained for ten years. In his White House years, Buchanan wrote foreign policy speeches and attended four summits, including Nixon’s opening to China in 1972 and Reagan’s Geneva and Reykjavik summits with Mikhail Gorbachev in 1985 and 1986.

Buchanan has written 12 books, including seven New York Times best-sellers: “A Republic Not an Empire,” “Death of the West,” “Where the Right Went Wrong,” “State of Emergency: The Third World Invasion and Conquest of America,” “Day of Reckoning,” “Churchill, Hitler and The Unnecessary War,” and “Suicide of a Superpower,” as well as a Washington Post 1988 best-seller about growing up in the nation’s capital, “Right From the Beginning.” He is married to the former Shelley Ann Scarney, a member of the White House staff from 1969 to 1975.

Just seven weeks into his presidency, Joe Biden signed a $1.9 trillion COVID-19 relief bill. Among the largest spending bills in history, it was passed without the vote of a single Republican. The plan sent direct payments of up to…