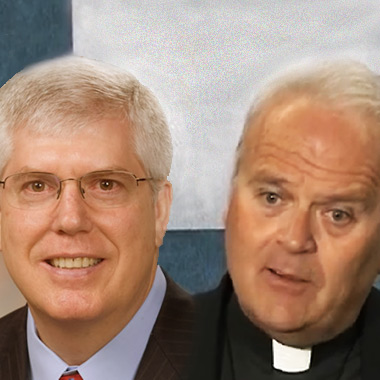 Mat holds Bachelor, Master and Juris Doctorate degrees, and an honorary Doctorate of Laws and a Doctorate of Divinity. He has argued two landmark cases before the United States Supreme Court as lead counsel and written numerous briefs before the High Court. Mat has argued in numerous state and federal courts across the country and has over 210 published legal opinions. He has authored hundreds of popular articles, five scholarly law review publications, numerous brochures and booklets and 11 books — most of which focus on constitutional law, including his two most recent books, Eternal Vigilance: Knowing and Protecting Your Religious Freedom, and Same-Sex Marriage: Putting Every Household at Risk.

Deacon Keith A. Fournier is Founder and Chairman of Common Good Foundation and Common Good Alliance. A married Deacon of the Roman Catholic Diocese of Richmond, Va., he and his wife Laurine have five grown children and seven grandchildren. He is a human rights lawyer and public policy advocate who served as the first and founding Executive Director of the American Center for Law and Justice in the 1990s. He has long been active at the intersection of faith and culture and serves as Special Counsel to Liberty Counsel. He is also the Editor in Chief of Catholic Online.

The largest homosexual, lesbian, bisexual and transgender advocacy and propaganda organization in the United States is coming after Christian colleges. Whether the college is Catholic, Orthodox, mainline Protestant, Evangelical Protestant, non-denominational or charismatic, the Human Rights Campaign (HRC) will be coming after…

The New Abolition Movement Against the New Slavery

Remembering Gettysburg: America Needs to be Moral to be Free

The “Soft” Beginning of the Post-Obergefell Persecution