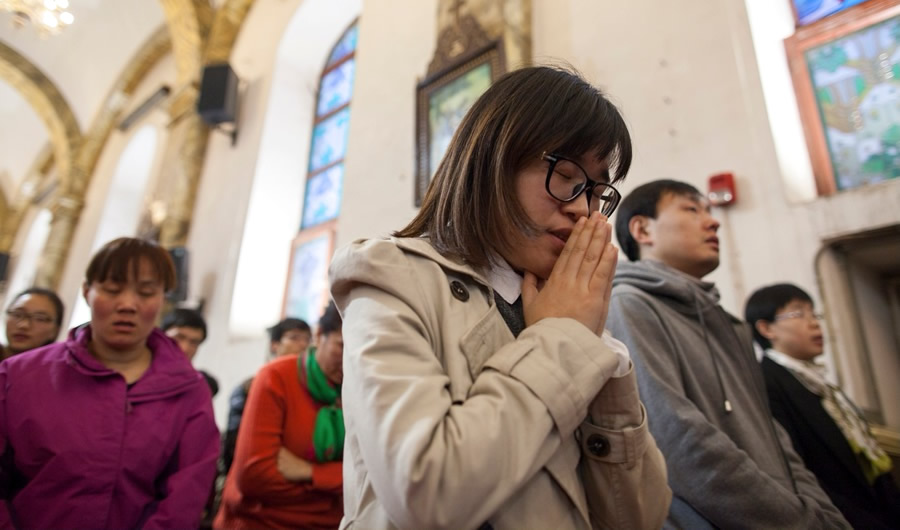 President George W. Bush once offered a reflection on gullibility and betrayal. He told a crowd “Fool me once, shame on … shame on you. Fool me … . You can’t get fooled again!'” The president managed to mash together an old saying that ends “Fool me twice, shame on me” with half-remembered lyrics from a Who song (“Won’t Get Fooled Again”).

A Bushian level of befuddlement must now prevail in the Vatican, as Pope Francis watches his hopeful alliance with China collapse into comprehensive failure. Francis’s right-hand man, Bishop Marcelo Sorondo, touted the Vatican’s secret agreement with China as a diplomatic coup, even praising the Communist regime as a better model of Catholic social teaching than Trump’s United States.

The deal which Ted McCarrick brought home from Beijing (just before being exposed for sex abuse and disgraced) was supposed to end decades of suspicion and hostility. The persecution which began with Mao Zedong was meant to give way to cooperation and build up trust.

See No Evil, Hear No Evil

Certainly, Francis spent every last cent of the church’s moral capital on making nice with China. He didn’t denounce its persecution of millions of Uyghur Muslims or even its savage crackdown on peaceful local Christians. When the regime arrested or “disappeared” Chinese bishops — his colleagues and moral equals — Francis said nothing.

When the dissident Cardinal Joseph Zen managed to get three days of freedom from jail and flew to Rome, Pope Francis refused to meet with him. When China issued fake bibles that butchered the words of Jesus Himself in the Gospel to justify its abuse of capital punishment, Pope Francis didn’t rebuke it. (Though he’d rebuked candidate Donald Trump for trying to build a border wall.)

Bishop Sorondo even offered moral cover to China’s black market sale of human organs stolen from prisoners of conscience, insisting against all evidence that China only traffics in willingly offered organs.

No 30 Pieces of Silver

For all these betrayals of a pope’s prophetic mission, Francis got not even a single meaningful concession for the church. (Though a whistleblower reports secret CCP payments to the Vatican of $2 billion a year.)

China didn’t see a potential partner. Instead, it smelled weakness and pounced. It amped up the persecution of the independent (underground) churches. It picked its own candidates for bishop in its puppet “Patriotic Church” and ordained one without the Vatican’s approval — in clear violation of the non-secret clauses of McCarrick’s agreement.

China tightened the vice on Uyghurs and other religious dissidents. Any Chinese who’d hoped that the Vatican’s influence might mitigate their suffering were bitterly disillusioned. China has proved no more faithful to its promises to Francis than the Nazis were to their concordat with Pope Pius XII.

My own organization, the Vulnerable People Project, is trying to heal the damage via its Free Our Bishops campaign.

If Pope Francis was disappointed at China’s cynical breach of contract with the church, he must be deeply depressed by the fruits of another Vatican olive branch: the church’s total surrender to China’s narrative, rhetoric, and policies around COVID. A church that for decades had rejected the tainted fruits of research conducted with organs stolen from the living bodies of unborn babies … caved. Completely.

Under Francis, the Vatican insisted that using such research presented no moral problems and forbade bishops and priests to support conscientious refusal of the COVID vaccines. Francis removed from office one bishop who defied him on this and issued a Vatican coin celebrating the (useless, dangerous) vaccination of young people.

And now, what does Rome have to show for all this?

The people of China themselves are rebelling en masse against the totalitarian “zero COVID” policies of the Communist party, which many Western governments emulated as much as they could get away with. As CNN reports:

What drove the people to this point? Horrendous government actions like welding people in to their own homes, allegedly to “stop the spread.”

Some people are committing suicide jumping out of their windows.

These lockdowns led to horrific carnage when one of the buildings caught on fire:

On Nov 23, when a fire broke out in #Urumqi , people’s doors were locked from outside. Fire truck couldn’t get closer either( see my previous tweet). The latest figure says 44 were burnt to death, including a 3 y/o kid. That’s one of the reasons for today’s protests. pic.twitter.com/s4E0JHk4wQ

God bless these Chinese dissidents for their courage. We owe them our prayers and support. Thousands of Chinese who face a fully totalitarian government are displaying more spiritedness than Americans who caved in to our own blue-state public health dictatorships.

Francis Belongs in Sackcloth and Ashes

For all these catastrophic compromises, these sins that turned out to be blunders, Francis must fully and publicly repent. He needs to speak clearly in defense of his own unjustly imprisoned bishops and persecuted faithful. Francis must claw back some credibility for the church by championing Uyghurs, the most persecuted ethnic minority group now on earth.

The Vatican also needs to step back and correct the misleading teachings it offered on medical morality, which seemed to endorse an “open season” on preborn babies for COVID research which The Stream has documented included dozens of new vivisection abortions.

Will Francis do any of this? Will he confess his sins and bring grace and healing to his soul, the Church, China, and the world? That’s a question he needs to answer in his own conscience.

The New Axis of Evil? Kabul, Beijing and Vatican City