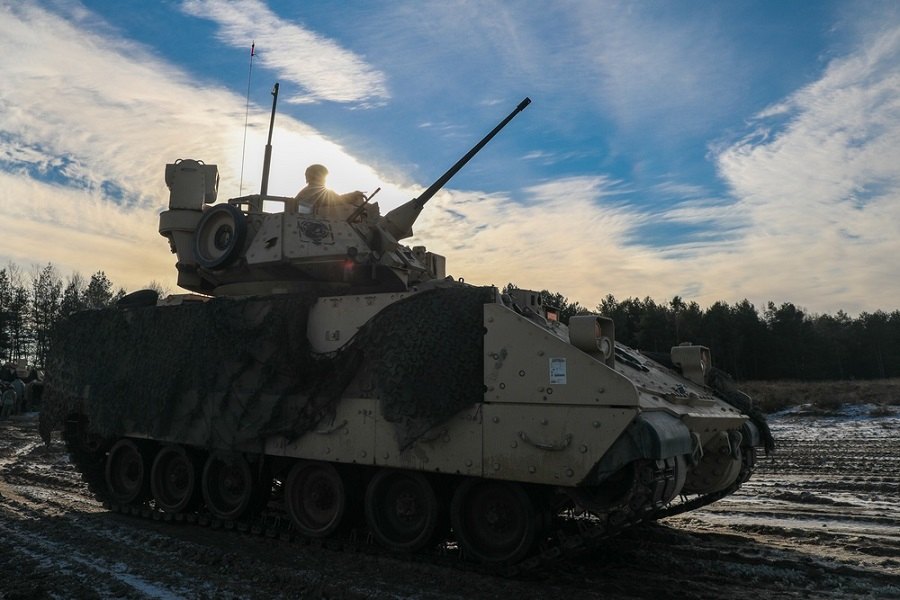 A U.S. Army soldier operates as the commander of a Bradley Fighting Vehicle at Konotop Range in the Drawsko Pomorskie Training Area of Poland on January 22, 2022.

Ever since the possibility of U.S. troops being deployed to deter a possible Russian invasion of Ukraine emerged last week, a plethora of numbers have been thrown around by the media. While 8,500 U.S. troops have indeed been placed on high alert, it’s important to remember that American service members are not statistics. They are real people with families.

On January 21, a ceremony was held at Fort Hood in Texas to thank and bid farewell to a group of U.S. Army soldiers deploying to Poland. They are heading to Europe as negotiations aimed at ending the Russia-Ukraine crisis reach perhaps their most critical phase.

“I have watched all of you work incredibly hard to get ready to deploy,” U.S. Army Lt. Col. Katherine Leidenberg told her troops. “You packed up and moved over 290 pieces of equipment. You got it done and you got it done to standard to the point where you actually finished early. That’s the outstanding type of logistics unit that sits before me.”

Thousands of American troops are already in Poland and Romania, with many more potentially on the way. Whatever the final number winds up being, it’s critical to keep these brave men and women and their families in our constant prayers. While their duties are difficult enough, there is nothing harder for an American service member than separating from his or her loved ones for months or even years at a time.

“I am going to ask you to do one more essential thing while you’re deployed,” said Lt. Col Leidenberg at the pre-deployment ceremony. “Take care of each other. Watch out for your battle buddies to your left and right.”

This week in Syria, where about 900 U.S. troops are still deployed, fighting continued at a Hasaka prison that was seized last week by ISIS terrorists. The New York Times reported that “60 to 90 militants from (ISIS) were still fighting from inside” the northeastern Syria prison as of Thursday morning.

The Pentagon confirmed this week that American forces are providing “limited” support to Syrian Kurdish troops fighting to retake the jail facility.

“We have conducted a series of strikes through this days-long operation to include the precision targeting of ISIS fighters who were attacking the (Syrian Democratic Forces) from buildings in the area,” said Pentagon spokesman John Kirby, as reported by The Military Times.

In Iraq, where rocket attacks by suspected Iranian-backed terrorist groups are ongoing, the 2,500 U.S. troops still serving there are increasing focused on training and assisting the Iraqi military. Business Insider noted this week that while the formal U.S. combat mission ended in December, Iraq’s elite special forces soldiers “still have a very close relationship with the U.S. special operations community.”

U.S. “Army Green Berets are ideally suited for such missions because of the extensive cultural and language training they receive,” Stavros Atlamazoglou wrote. “That enables them to recruit, train, and advise foreign units — key components of their foreign internal defense mission.”

We thank all the courageous U.S. troops serving in the Middle East and pray for your swift and safe return.

As more American troops prepare for possible deployments to Poland, a group of U.S. Army soldiers returned to their families this week after a nine-month deployment to the European country. 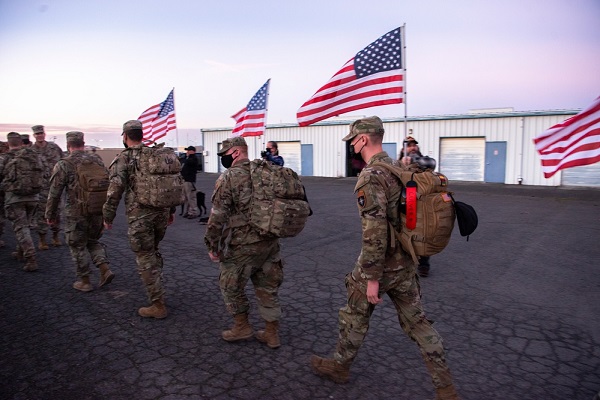 U.S. Army soldiers return from a deployment to Poland at the Jackson Armory in Portland, Oregon, on January 25, 2022.