They Laughed at Jesus, and Should Have 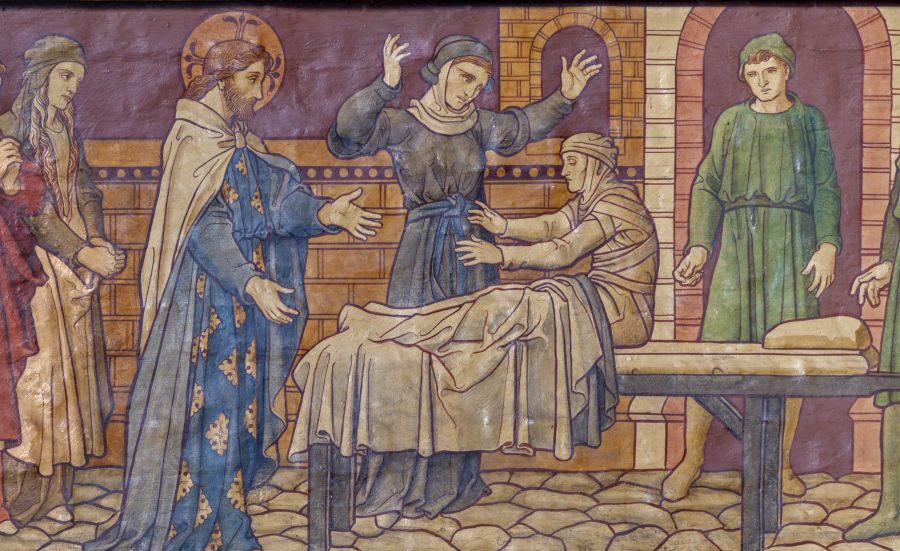 A fresco of the Raising of Jairus's Daughter in the church Saint Augustine's, Kilburn, in England, from the end of 19th century

They ridiculed Jesus, reports the gospel reading many of us heard last Sunday. The people mourning a dead girl laughed at Jesus when he said she was only sleeping. At Jesus. The Son of God. These silly people laughed at the creator of the universe.

I think the mourners were absolutely right to do that. They did what God created  human beings to do when they laughed. And that laughter prepared them to know Jesus when he showed them who he is. Let me explain.

The gospel of Mark tells us a synagogue official named Jairus begs Jesus to come home with him. He wants Jesus to heal his daughter who might die any minute. He must have been frantic. He drops to the ground at Jesus’s feet and pleads with Him to come. Jairus believed in Jesus that much. Or maybe he was just so desperate. We don’t know.

They start for Jairus’s house, but get interrupted on the way by a woman who has been bleeding for twelve years. Just touching Jesus’s cloak heals her. Jesus asks the crowd who touched Him. He knew, of course. He was inviting her to come to Him, to meet him face to face, and when she did, He told her that her faith had made her well. She didn’t just get better. She literally came to Jesus.

It’s a great story, but there’s someone else in the picture, someone for whom it might have felt more like a great interruption. We can imagine Jairus’s frustration, pacing around, telling Jesus they have to go, or even grabbing Jesus’s arm trying to pull Him away. His daughter may die at any second. Then people from home come to tell them the girl has died. No need to bother Jesus anymore.

Jairus must have been crushed. His last hope was gone. Jesus tells him not to feel afraid, but to have faith, and they walk to his home.

Jesus walks into the house and finds people crying and wailing. He tells the mourners the dead girl isn’t dead, but only sleeping. They ridicule him. They laugh. They mock. Maybe they roll their eyes. Because she’s dead.

It’s a great set up for a moralistic lesson. Preachers will say “Don’t be like the people who ridiculed Jesus.” Have faith, they say. Believe what Jesus says. That’s true. But it’s not relevant here.

Because — and this is a crucial point — they didn’t know this guy. The girl’s father knew Him, or maybe just knew about Him. In either case, why should they trust His judgment? Desperate people get fooled all the time. The girl was dead. One thing you’d know living in the ancient world is what dead looks like. She was dead. And once dead, people stayed dead.

Yet some guy tells them she’s alive. They probably thought Him a con artist. A lot of conmen went around taking advantage of desperate or gullible people. Just like today. Some claimed to raise the dead. They hung around like vultures.

What else could the mourners think? The girl’s dead and this man says she’s just sleeping. He doesn’t seem to be crazy. He must be a conman. And what do you do with conmen who try to exploit people’s pain? You can beat them up, or you can laugh at them. You should ridicule a con man, especially when the con is so ridiculous.

We see people saying the same kind of thing today. Not just conmen pretending to be faith healers. The so-called New Atheists with their cheap “gotcha!” arguments, for one. “Progressive” Christians with their twisting of the Bible and misreading of history to make them say what they don’t say. The sillier pro-choice arguments. These arguments are so cheap they’re pretty much a con, not a serious claim. We don’t beat up people for that. But we can laugh at them.

That’s what the mourners were doing, and three cheers for them. Against the preachers I’ve heard, I say: be like the people who ridiculed Jesus. The mourners laughed at a claim they had every reason to believe was a lie. They stood for the truth, as far as they could see it. Standing for the truth prepared them to know Jesus.

Jesus has to prove Himself. He doesn’t expect people to follow him without reason. The Truth wants people to love the truth so that they will see the Truth when He comes. What did the mourners’ defense of the truth that they knew, expressed in their ridiculing Jesus, do for them? It prepared them to meet Jesus when he appeared.

The question is what they did when they saw the Truth. When that little girl walked out of the room, they knew for sure Jesus wasn’t a conman. He did what he said He would do. Something no one else could do. Did they ask who He really is? Did they, like the women who’d been bleeding, truly meet him face to face?

David Mills is a senior editor of The Stream. After teaching writing in a seminary, he has been editor of Touchstone and the executive editor of First Things. He writes the monthly “Last Things” column for the New Oxford Review. His previous article was “Why We Don’t Really Want Heaven.”