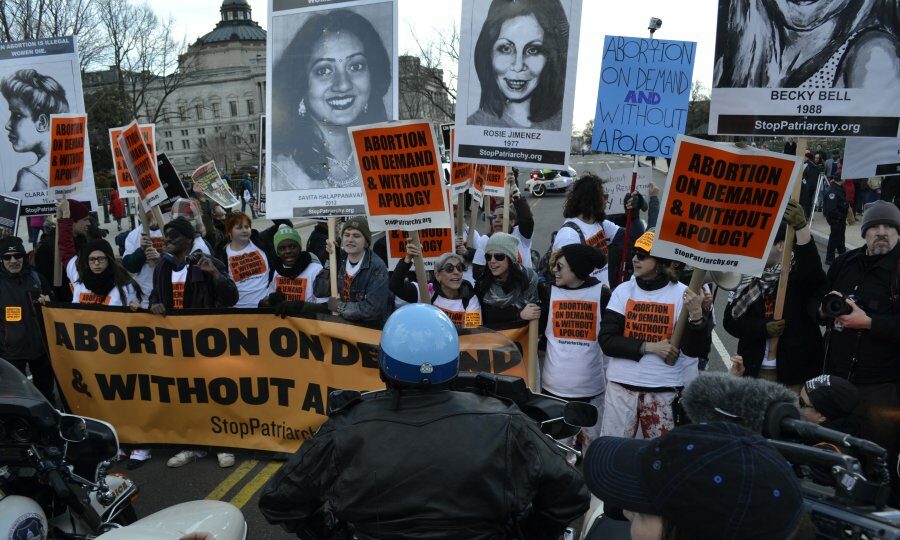 “God is technically pro-choice,” the meme runs. “He gave humans free will for a reason. So idk [I don’t know] what all you pro-lifers are screaming about. If God won’t even make my choices, what gives any of you the authority to think you should??” (The double question mark is in the meme.)

It’s the kind of thing George Orwell called “silly-clever.” Silly in meaning but hard to refute because it’s clever. It leaves most of us not knowing what to say. We’re not good at dealing with silly-clever stuff put into short punchy memes. We start trying to explain the nature of free will, the moral law, the problem of evil, while the memer just smirks.

That makes it a good meme. Not truthful, not by a mile, but effective, because it sounds truthful.

But the group Secular Pro-Life, they’ve got this. You run into a pro-choice meme you can’t deal with, they probably have already, and well. Take their response to this meme, for example.

They Bat It Down

First, they bat down the first sentence with “I don’t believe in God.” Christians can’t say that, of course, but when our secular allies say it, they defeat the eternal pro-choice attempt to make the defense of life solely religious.

The pro-choicers want to win the argument the cheap way. They want to rule any other position out of bounds. They claim that defending unborn life is “religious” and in America we can’t bring religious points of view into law.

No matter how often Christians explain that we oppose killing the unborn because humanity knows that killing the innocent is wrong, not because we’ve got special insider instructions, the pro-choicers say “You’re imposing your religion.” When they do that to our secular friends, our secular friends just laugh and toss their heads and note that they don’t have one.

But that’s not all the people at Secular Pro-Life are good at. They’re really good at taking apart dumb pro-choice memes. They do it with confidence and high spirits and a good bit of joy.

Straight to the Point

One thing they do well is that they go straight to the point. Many of us want to set up our argument, define our terms, establish our goodwill before we respond. By the time we get to the starting line, the other guys have already gone round the track.

It doesn’t work with memes. Our Secular Pro-Life friends know that. They know the medium and how to use it.

For example, a favorite trick of pro-choice memers is to act as if they don’t understand the pro-life point. They like to pretend that we’re not just wrong, but that we don’t make any sense. Especially if they think they’ve scored an unanswerable point. So in this meme the pro-choicers claim that God is pro-choice — “Gotcha!” — and then suggest that the ridiculous pro-lifers stay upset when they know better.

The SPLers, I’ll call them, aren’t having it. They respond to the third line, the fake-confused “So idk what all you pro-lifers are screaming about,” with a sarcastic “Sorry if we’ve been unclear.” Then they make their point straight out. After the sarcastic response, they explain: “We’re upset because abortion kills humans. We think killing humans should generally be illegal.” Boom.

They don’t neglect argument. They respond pointedly to the last line, “If God won’t even make my choices, what gives any of you the authority to think you should??”

The SPLers write: “Do you think littering should be illegal? Tax evasion? Rape? If you believe any action at all should be illegal, then you think you have the authority to influence other people’s choices, even if your god won’t force the issue.”

Pro-choicers use this argument so much. They argue from an absolute principle they don’t hold. No sane person would hold it. Which doesn’t stop them from throwing it at people who only want to save the lives of unborn people.

Their “gallery,” as they call it, has a lot more memes taken down this way. I just picked the one on top because it was on top and it started with a cheap “gotcha!” claim that annoys me. Some take up dumb memes like the one I described. Others refute pro-choice arguments. Others disprove pro-choice factual claims. But they’re all good. (I should warn you that they respond to some pretty rude memes. This isn’t a page to look at with little kids who can read.)

Let me give a couple more examples. One pro-choice meme runs: “If the fetus you save is gay, will still fight for its rights?” This seems to be meant to accuse pro-lifers of being bigots.

The SPLers turn it around on the pro-choicers. Boom again.

Another meme shows a picture of an egg and asks “Q: Is this a chicken?” This seems meant to accuse pro-lifers of being ignorant of basic biology. 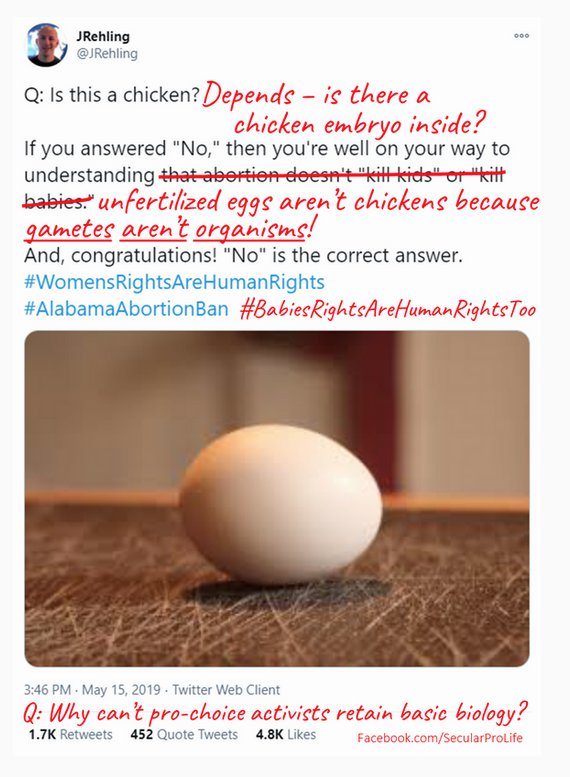 Much of the success of the Secular Pro-Life group in countering silly-clever pro-choice memes comes from their skill mixed with their boldness. They know how to knock down a bad argument and enjoy doing it.

But part of it comes from the fact that the pro-choice movement tries to defend a massive lie, a claim so obviously wrong that no one can tell it convincingly. Anytime they try to do it, they wind up looking stupid. (Some have given up trying, of course, and admit that they will let other human beings be killed. I look forward to seeing how Secular Pro-Life responds to them.)

The inescapable reality is that the unborn child is an unborn human being, who has all the rights to live that any other human being enjoys. That’s the elephant in the pro-choice room. The SPLers seem to be having a great time yelling, “Hey, look at the elephant!” while the pro-choicers pretend he isn’t filling their living room, pooping on the floor, and knocking down people with his trunk.

David Mills is a senior editor of The Stream. After teaching writing in a seminary, he has been editor of Touchstone and the executive editor of First Things. He writes the monthly “Last Things” column for the New Oxford Review. His previous article was Jesus Was Wrong! Say Progressive Christians. He’d Be One of Us Now.