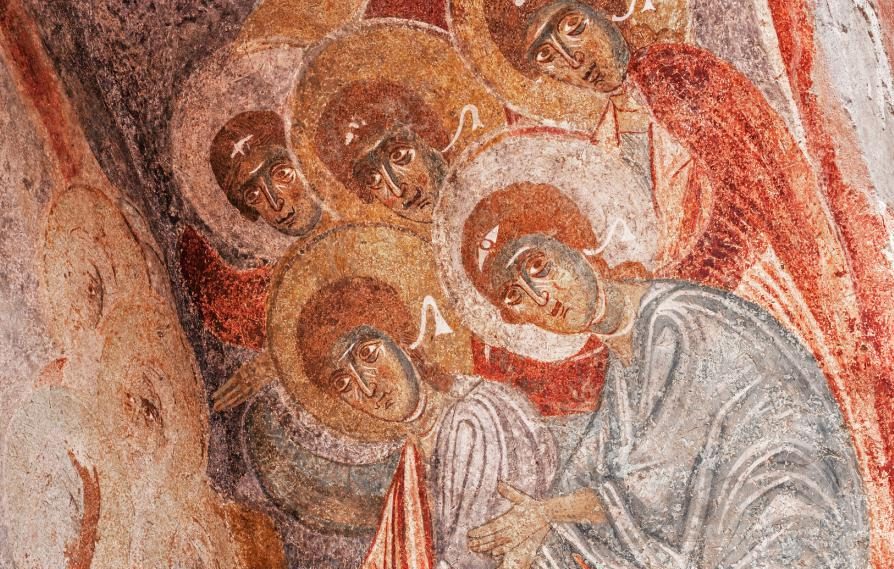 Ancient Byzantine fresco at the church of Saint Nicholas

My old friend said she walked to the bathroom and threw up. She’d just heard a professor explain that Christians believe Jesus is fully God and fully man because an emperor said so. She’s now a bestselling religious author, but then Diana Butler Bass was a doctoral student at Duke, preparing for a career as a Church historian. And Professor Elizabeth Clark upset her world.

Diana told the story in a series of tweets. People who argue about this kind of thing argued. The argument may look like an academic argument about ancient history. It’s really an argument about the nature of Christianity: Whether the Faith is given to us in detail or it’s something we create as we go along. I would say the first. My old friend would say the second. (I’m not sure my friend reported her professor’s lecture completely accurately. When I write “Clark,” it means “Clark as Diana reported it.”)

You may know the story. By the early fourth century, the long persecuted Christians had gained some respect and freedom. The Church had grown so big it couldn’t be ignored or persecuted anymore. (See the historian Rodney Stark’s book The Rise of Christianity if you want to know why. Or this interview.) The Emperor Constantine kind of became a Christian (it’s complicated), though no one knows how much he really meant it. It’s hard to tell with emperors.

Diana had been a close friend for several years by the time she heard the lecture that so upset her. We’d gone to the same church before she went to Duke. She and her first husband were godparents to our second child. While I was finding orthodox Christianity increasingly fascinating and life-changing, she found it increasingly inadequate and often wrong.

Even then, Diana liked to talk about her faith as “the journey.” She seemed to mean a journey without much of a map or a destination. Almost like sight-seeing. I could see it as a journey too, but one with at least a rough map and a place you must get to, however long it takes and however hard the way.

She saw this kind of Christianity as the hope for the mainline churches. I didn’t think there’s enough to it. It’s too thin, and lives on its inheritance from the older forms of Christianity. You can find my response in my Touchstone review of her book Christianity for the Rest of Us. (It won that year’s best review award from the Associated Church Press, which I don’t think pleased my friend.)

At the same time, a priest named Arius pushed the idea that Jesus was God, but not quite God in the sense God was God. He said the Father created the son. He was a creature just like us, even though infinitely greater. Arius wasn’t obviously wrong. Some biblical verses could be read that way.

Other Christians hit the roof. Arius denied what Christians had believed since the beginning. Jesus saved us because He was at once one of us and God Himself. A Jesus who wasn’t all God couldn’t be the savior Christianity proclaimed. So this was not a small matter.

Constantine called the Church’s bishops together in a city called Nicaea to settle the argument. (Nicaea’s the modern city of Iznik in Turkey.) The meeting’s now considered the first Church council. St. Nicholas played a big role. People like to say he decked Arius, but he didn’t.

After arguing about this for two months, the council eventually agreed to use a Greek word, homoousios, to say that Jesus is all man and all God at the same time. (We usually translate the word as “one in essence” or “consubstantial.”) They condemned Arianism. The emperor sent Arius into exile.

The council created most of what we now call the Nicene Creed, which many churches say every Sunday as a proclamation of basic Christian belief. That creed defines what almost every Christian today from Southern Baptist to Russian Orthodox believes about the Trinity.

The Professor and Power

The professor told the story as a matter only of power, which the emperor had and the bishops didn’t. She claimed that for Constantine — as Diana reports it — “Christianity seemed an ideal way to consolidate power. But there was a problem: Xianity was theologically divided.” He “called the council, ordered bishops from across the empire to attend, paid for the whole thing — travel, lodging, etc — from public funds.” Both true. But they don’t mean what she thinks they mean.

Clark claimed that the emperor directed the discussion and the bishops went along. The traditional story that the bishops worked out the doctrine for themselves can’t be true. “How would this be possible?” she asked, according to Diana. “You are a bishop, w/your presence bought & paid for by Constantine & you objectively discuss doctrine?” Because, Clark said, “Emperors don’t defer to bishops. Power works the other way around.”

Strip out the academic language and Prof. Clark’s claim as Diana reports it is simple-minded.

Diana writes: “It was like a dagger through the heart. I got exactly what she was saying: the business of the Holy Spirit writing the creed, miraculously guiding the church to particular words explaining Christ, was better understood in terms of political consolidation of imperial power.” In a follow-up tweet, she added, “It wasn’t a miracle. It was history. About people and power and privilege. About controlling outcomes and getting your way. About sin and writing history so that you are the hero.”

Strip out the academic language and Prof. Clark’s claim as Diana reports it is — I’m sorry to have to say this — simple-minded. And simple-ended in service of a particular vision of Christianity remade.

For one thing, the history’s dodgy. What evidence we have suggests Constantine favored Arius. And he doesn’t seem to have cared who won. He just wanted Christians to stop fighting. Homoousios would have done just as well as Arianism, as long as the Christians agreed.

For another thing, the description ignores how people act, a lesson we can see in history. The bishops really did believe it mattered, whatever the emperor wanted. We know why they did, through the later writings of one of the council’s heroes, Athanasius. He explained it his Orations Against the Arians and On the Incarnation. The history we have tells us that the bishops didn’t do what the emperor wanted them to do. Because they had a truth they wanted to preach more than they wanted to save their own skins.

Why would someone as smart as my old friend, and possibly her very distinguished professor, miss this? Because she (or they) read the story through a theory. Unfortunately, it’s not a very good theory. It leaves out too much. For one thing, it leaves out the reality that people will defy the powerful for a truth they believe. Like Thomas More or Martin Luther. Like Alexander Solzhenitsyn or Martin Luther King, Jr. Like millions of Christians and other people through history. She says bishops defer to emperors. Heaven knows they do. Way too often. But sometimes they say No.

More importantly, she’s not making an historical judgment. She’s making a theological judgment and calling it historical. She essentially asserts that the Holy Spirit doesn’t work in history. “It wasn’t a miracle. It was history,” as Diana explains it. It’s all about men fighting for power.

The history’s dodgy, but the theology’s worse. That’s the real problem. And I think the real appeal of this way of reading Christian history.

This idea of Christian history lets us create our own Christianity. It lets us throw out anything from the Christian tradition we don’t like. Because that’s all “About people and power and privilege. About controlling outcomes and getting your way. About sin and writing history so that you are the hero.”

All we have to do is claim to follow Jesus. But not the gospels’ Jesus. Definitely not the epistles’ Jesus. A Jesus with all the un-modern stuff stripped out. Diana herself does this, tweeting, “And yes, Jesus. The mystery of it all holds me; for faith is just that, faith. Being beloved of and beloving God.”

Mystery. Faith. Love. God is a mystery, yes. But a mystery who has revealed Himself. We live in faith, yes. But faith in a God who has told us who He is and what He’s done for us. And more challengingly, what He wants from us. We rest in God’s love and try our best to love Him, yes. But the God who loves us, loves us by instructing us, forming us, helping us, even chastising us.

An Argument About Christianity

As I said, this squabble about the Council of Nicaea is really an argument about the nature of Christianity. People like my old friend think we create the Faith as we go along based on a thin idea of Jesus. Orthodox Christianity insists that we receive it as a Divine gift given to us in detail centered on the God-man Jesus, the one we meet in comforting and terrifying reality in the gospels. We would say, “It was a miracle and it was history,” respecting the mysterious ways God works among and through His fallen creatures. She says flatly, “It wasn’t a miracle.”

Orthodox Christianity is much more interesting and much richer, much more likely to lead us to useful discoveries and insights. And to holiness. Diana’s alternative is too thin, too simple, too easy to make up as you wish, to get us anywhere. The second gives us red meat. The first gives us cotton candy: a nice treat, if you like that sort of thing, but nothing you can live on.

This article has been updated to express the possibility that Diana Butler Bass didn’t report what her professor said with complete accuracy.

Thanks to Mark Tooley, who reported the story on the Institute for Religion and Democracy’s site.

David Mills is a senior editor of The Stream. After teaching writing in a seminary, he has been editor of Touchstone and the executive editor of First Things. He edits the site Hour of Our Death and writes the monthly “Last Things” column for the New Oxford Review. His book Knowing the Real Jesus deals with the question of what the bishops did at Nicaea and why they insisted on creating a set creed.