The New Axis of Evil? Kabul, Beijing and Vatican City 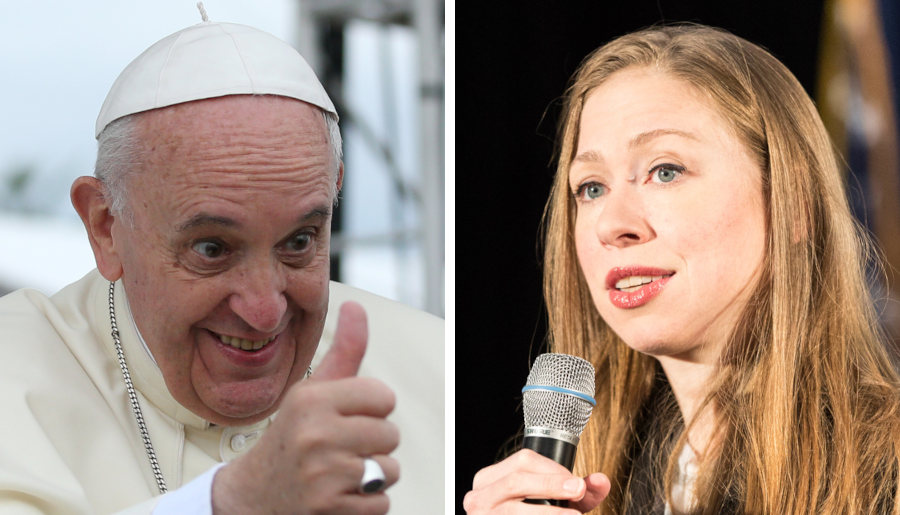 It was here at the Stream that my friend and co-writer John Zmirak proposed a bold and surprising thesis: Namely, that Pope Francis’ deal with China (negotiated by accused sexual abuser Ted McCarrick) was not a surrender but an alliance. That alliance only deepened in subsequent months. Francis sent his right-hand man, Bishop Marcelo Sorondo, on a shepherded tour of China. Afterward, Sorondo raved about how China embodied “Catholic social teaching” far better than Donald Trump’s America.

Remember how many artists, writers, and liberal clergymen toured Stalin’s Russia in the 30s, and returned with fawning reports? Paul Hollander wrote a whole book about them, Political Pilgrims. Paul Kengor wrote another, the encyclopedic Dupes. Sorondo was just the latest to sell out the free West to its enemies, after a couple of weeks of fancy dinners in Potemkin villages.

Sorondo even spoke at a Communist party conference to flatter China’s regime. The leading authority on Catholic social teaching heaped praise on a meeting of the regime’s chief organ thieves, who steal livers and lungs from living prisoners of conscience (Muslim and Christian) then sell them on the black market — according to Forbes magazine.

Quoting Putin to Own the Yanquis

In case you’re not vomiting yet, remember that China and the Taliban have been allied since the 1990s. I documented that alignment myself here at the Stream, along with Salih Hudayar, the exiled Uyghur prime minister. Since it captured the country, the Taliban has boasted that Afghanistan will now be part of China’s “One Belt One Road” initiative, intended to speed Chinese trade (and power) across Central Asia to Europe.

And now, as the Taliban hunts down Christians, and forces young girls to marry blood-stained old jihadists, Pope Francis is speaking out. Not against the Taliban, of course. He has said not a word about the rise of a radical Islamist regime, or its theocratic abuses. No, Francis is once again slamming … the United States of America. He’s even quoting Vladimir Putin, who mocked Biden’s incompetence and America’s craven escape. To be fair, Francis got confused, and attributed Putin’s words to Angela Merkel. Nobody ever accused Francis of being the sharpest knife in the drawer.

We know that Francis’ hatred of Donald Trump and his supporters warps his choices. The same pope who said of promiscuous gay priests in his own Vatican, “Who am I to judge?” was more than happy to condemn Trump and his voters. He said during a close campaign election in 2016 that anyone “building walls” to control national borders was “not a Christian.” That sounded pretty judgmental to Catholic voters, though not to quite enough of them to hand the election to Clinton. Francis’ take on the Clintons is clear enough; he’d invite Chelsea Clinton to speak at the Vatican, on behalf of her family’s kleptocratic foundation.

Francis Shares a Hatred with the Taliban and the CCP

But there’s more here than Argentine resentment of El Yanqui. Francis displays a real and abiding ideological alignment. He embraces globalist oligarchs at the World Economic Forum, who’d use COVID panic to strip us of free movement, medical autonomy, and property rights. Francis demands that all Catholics take a vaccine either made with or tested on organs stolen from babies during abortion. This pope is shutting down the rights of Catholics to the liturgy of their ancestors. He praises the ministry of LGBT court dwarf Fr. James “Sexy Priest” Martin.

There’s a script here, folks. Or better yet, we can find in all this evidence a DNA fingerprint. There’s something real and abiding that links Pope Francis’ many resentments and grudges, his affinities and alliances. I don’t see here a positive program of Francis’, so much as a potent aversion, even a hatred. It’s a loathing Francis shares with the mullahs of the Taliban, and the crony national socialist bigots who rule in Beijing.

They hate Western man. They detest the idea of economically prosperous, independent minded, politically proactive citizens, attending their churches of choice, buying and selling freely, owning guns to defend their families. In other words, the archetypal American, who carries on and expands the Anglo-Saxon tradition of ordered liberty. That is the villain in the stories they tell in Francis’ Vatican, the Taliban’s Friday sermons, and China’s re-education camps. He is what they must destroy.

What this Axis Shares with Teachers Unions and CRT Preachers

Those who’d invert our nation’s history want to pretend that such a figure never existed. That America was founded as a haven for slave masters and exploiters. That’s what Critical Race Theory, via the 1619 Project, is teaching in our schools. It’s the message of race-baiting activists who’ve infiltrated our churches, to divide and conquer them. It’s the grudge in the gut of Antifa activists who attacked a church gathering in Portland two weeks ago, shooting pepper spray at children.

But you and I know better. We’ve seen It’s a Wonderful Life, and Mr. Smith Goes to Washington. Some of us remember Ronald Reagan and Martin Luther King, Abraham Lincoln and Frederick Douglass, John Quincy Adams and John Brown. We know that the American archetype is simply the fruit of the Christian tradition, with its profound respect for human choices and human dignity. If we are images of God, as scripture teaches, then none of us is fit to be either master or slave. Every authentic expression of American freedom flows from that simple, profound reflection. That’s the vision we presented in The Race to Save Our Century.

And every perversion of that freedom distorts and mocks it — whether it’s the invented right to abortion, or crackpot demands that every citizen be “free” to invent his own gender. It’s wearying to fight for that authentic freedom, fending off those who’d hijack it. Some Christians despair. They give up on the idea that we’re born to be free, and sign on to one or another ideological project to reorganize our species along the lines of a termite colony. Such Christians join the Taliban, the CCP, and this Vatican in waving off such freedom, with all its burdens and demands. They embrace instead some racial or historical determinism, which lets them feel like tiny cogs in the vast wheels of Progress.

No need to examine your conscience. No hope of making a change. We aren’t eternal diamonds flawed by sin, but mystery meatballs rolled out by Evolution on the assembly line to oblivion. We might as well make ourselves cozy, and try to enjoy the ride.