Canadian pastor Artur Pawlowski was to speak at the event. 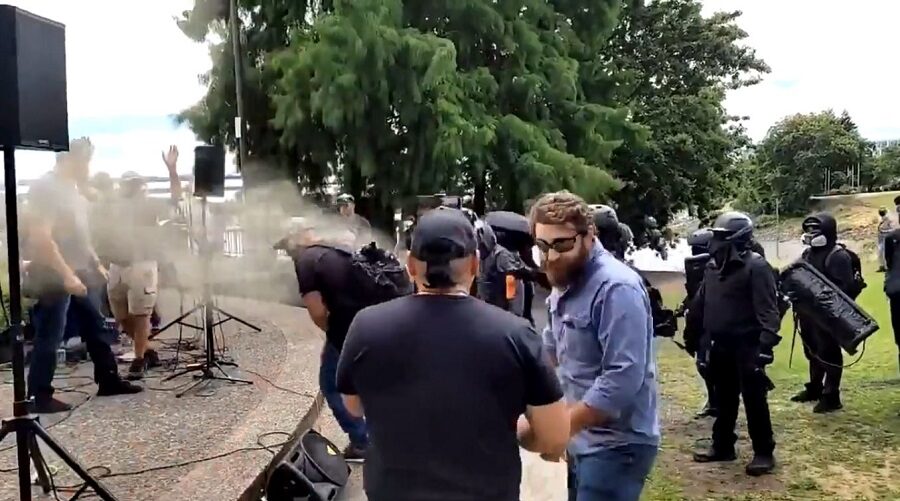 Antifa thugs attacked crowds of Christians praying at a waterfront park in downtown Portland, Ore., Saturday. A group of Christians were praying at the park when Antifa showed up, dressed in black. They began throwing objects at infants, children and adults and pepper sprayed some. Canadian pastor Artur Pawlowski, known for kicking police out of his church in a viral video, was to be the speaker at the event, which was advertised on Twitter.

According to a flyer still up on Twitter, Awakening Ministries hosted the event that started at noon. Antifa organized their group and also posted details on Twitter. One woman posted, “Welcome to Portland, you won’t like it here, Pastor,” with a devil emoji. She provided the details of the prayer event within the post.

One woman told a videographer what happened. “Antifa just rolled in like an angry mob, started throwing flash bombs at everybody, macing everybody, rotten eggs at everybody, um, black paint,” she said. “They threw a flash bomb into a group of kids that were out there from like four months old to like 10.” Christians were praying during the chaos, while an Antifa member was heard yelling, “Where is your god now?”

A woman attendee of the family Christian prayer event at the waterfront in downtown Portland describes what happened when antifa attacked them. pic.twitter.com/OtbHVftDor

In addition to the brazen attacks in broad daylight, Antifa threw the Christian group’s audio equipment in the river and stole their food and water.

According to this antifa account, after assaulting the attendees of the Portland family Christian prayer event, they stole their food and water. pic.twitter.com/BJ9ocq5UEh

Where were the police? According to Mike Huckabee, they were standing around.

More to the point, where were the Portland Police? Standing by and doing nothing. They allowed this outrage to go on and didn’t step in to stop it or to arrest anyone. I don’t know if this is because the police have completely abdicated their responsibility to protect public safety, or they were directly ordered by the leftist idiots running Portland not to touch the little anarchists, or if they have just been so cowed by previous incidences of the city’s political leaders siding with the criminals that they’re afraid to step in and do their jobs.

The Post Millennial confirmed that the Portland police did not have any interactions with either group and that they did not arrest anyone, even with all of the violence Antifa perpetrated on the Christians.