As brave U.S. troops confront new threats, the question isn’t whether the military has our backs. It’s whether we truly have theirs.

When U.S. Army Staff Sgt. Michael Ollis heard the thunderous bang of an exploding truck bomb, he sprung to action. Afghanistan’s Forward Operating Base Ghazni was under attack.

“They were in the ‘morale tent’ — that’s where they had computers and telephones so the guys could call home,” Staff Sgt. Ollis’ father, Robert Ollis, told me. “When the blast happened, it blew the doors off the morale tent.”

The terrorist attack’s frantic eruption was enough to rattle even the most seasoned warrior. But Staff Sgt. Ollis, the 24-year-old son of a Vietnam veteran, immediately focused on the safety of his men.

“Michael started counting heads and getting them out of there,” his dad said. “Then Michael went back in to make sure (the morale tent) wasn’t breached.”

After returning to lead his squad to a nearby bunker, the Staten Island, N.Y., native went back into the unfolding chaos. When a young private offered to bring his machine gun and join him in the fight, Michael, who was wearing no body armor and carrying just two ammunition clips, was more concerned about the young soldier’s well-being than his own.

“Michael ordered him to stay put,” said Robert, who has been in contact with several soldiers who served with his son during the Aug. 28, 2013, insurgent assault. 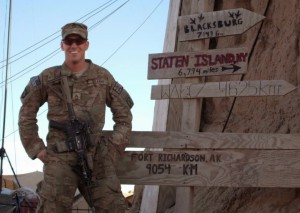 Michael, who was on his second Afghanistan deployment after another combat tour in Iraq, soon met up with a U.S. Special Forces team and Polish Army Lt. Karol Cierpica, who had already been wounded.

Surrounded by gunfire and explosions from enemy rocket-propelled grenades, two young warriors from different countries shared a powerful moment, even though neither soldier spoke the other’s language.

“Michael apparently touched both his eyes and touched his back and pointed at the (Polish) lieutenant, explaining to him that ‘I have your back,’” Michael’s father said.

Michael walked behind the injured Polish lieutenant as they began a hard target search for enemy fighters. With more than 1,000 U.S. and coalition forces inside the eastern Afghanistan forwarding operating base, eliminating the attackers was a crucial mission.

American and Polish troops were clearing shipping containers when they were startled by a man who leapt behind them. He was wearing a suicide vest.

Instead of diving for cover, Robert said that his son turned in front of the Polish lieutenant and protected the wounded soldier from danger. Michael fired and hit the suicide bomber, who fell to the ground.

Tension filled the air after the sudden burst of gunfire. Knowing that the terrorist might still be alive, Michael quickly approached him.

“Michael apparently reached down to the insurgent, maybe to try to get his hand away from the detonator,” the soldier’s father said. “We’re not really sure.”

The suicide vest exploded, throwing Michael about ten feet through the air, according to his dad.

Michael and his Polish counterpart suddenly lay side-by-side in a military hospital. Lieutenant Cierpica had been wounded in the attack — his second injury in less than an hour — but would live because he had been shielded from the brunt of the blast. Michael had already lost part of his arm, and was bleeding profusely from a severed artery in his leg.

“Lieutenant Cierpica was on the next gurney watching (the doctors) work,” Michael’s father emotionally explained. “He assured us that they did everything they could.”

In the painful moments that followed, Polish Army Lt. Karol Cierpica watched as his American brother in arms took his last breath. Indeed, U.S. Army Staff Sgt. Michael Ollis, who sacrificed everything to keep a solemn promise made during the heat of battle, had his back.

Nearly one year after Michael’s final act of courage, his parents walked the streets of Poland, where their son is now a national icon.

“A complete stranger walked up to us and said, in broken English, ‘are you the parents of the hero?’” Michael’s mother, Linda Ollis, told me. “So many people knew who we were when we were there … they just honored Michael in so many different ways.”

The Polish government posthumously awarded its Army Gold Medal — the top award for a foreign soldier — to Michael. The Ollis family also met with Poland’s president, prime minister, and U.S. ambassador during their August visit. They embraced the family of a Polish soldier who was killed in the same battle, as well as the Polish lieutenant who survived the attack because of Michael.

Next year, Lt. Karol Cierpica and his wife will welcome a newborn son. He will be named after Michael. Staff Sgt. Ollis’ grieving parents never could have imagined it, but Michael has become a hero of Poland.

Outside of Staten Island, “Michael Ollis” is not a household name in the United States. Yes, he has been awarded the Silver Star and rightfully honored by several government and military officials. But sadly, unless an Afghanistan or Iraq war hero receives the Medal of Honor, you probably won’t see his or her name trending on Twitter. 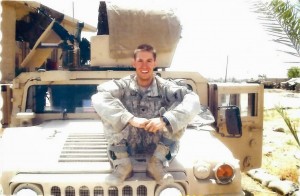 Almost everyone reading this article supports our troops. The vast majority of us also treat the veterans and military families we know with dignity and respect. But when it comes to the stories of the valiant men and women who have volunteered to protect us since 9/11, our generation is failing to pay attention. If thousands of Polish citizens already know the incredible account of an American soldier’s courage, so should we.

Amid confusion and violence in a faraway land, U.S. Army Staff Sgt. Michael Ollis gave an unmistakable signal to a foreign soldier he had never met. “I have your back,” he said.

At this hour, thousands of Americans are still deployed to Afghanistan. As brave U.S. troops also step forward to confront new, vicious threats, the question isn’t whether the military has our backs. It’s whether we truly have theirs.