Memorial Day is a time to not only remember those who made the ultimate sacrifice, but to salute the extraordinary Gold Star family members left behind. 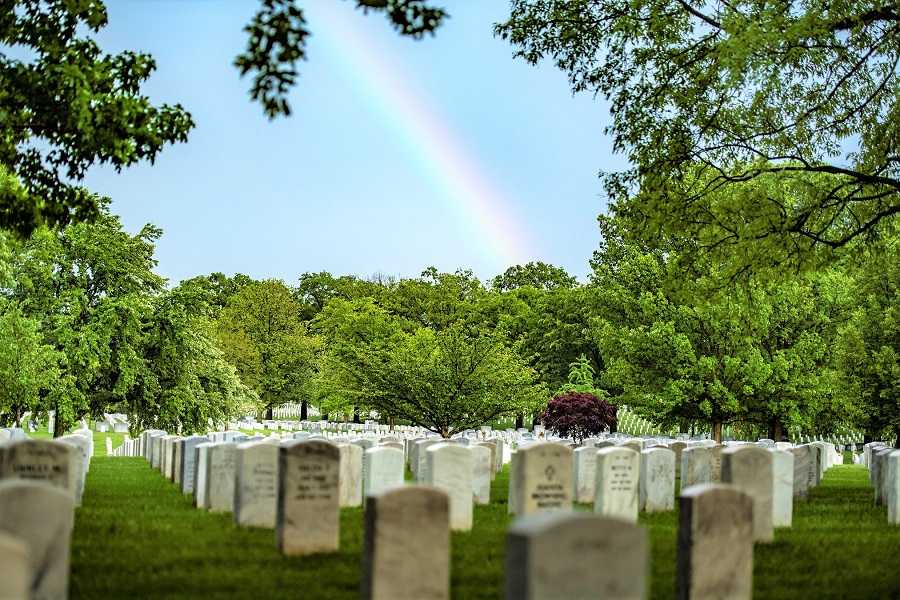 A rainbow recently appears over Section 60 of Arlington National Cemetery, where many heroes of America's post-9/11 conflicts have been laid to rest.

Memorial Day is a time to honor the fallen. It is also a day to spotlight the extraordinary loved ones who now carry on the legacy of America’s greatest heroes.

With many COVID-19 restrictions being lifted, I asked Gold Star family members how they planned to mark Memorial Day 2021 after being forced to spend last year’s solemn holiday at home. The responses I received are not only touching, but highlight the selfless nature of our nation’s Gold Star families. They don’t just want to remember their loved ones, but connect with and help others.

“Visiting my brother’s gravesite in Section 60 at Arlington National Cemetery and to see other families,” said Ami Neiberger-Miller, sister of U.S. Army Spc. Christopher Neiberger, killed in action in Iraq on August 6, 2007.

“I will be attending a memorial service at Fort Bragg in North Carolina the 26th & 27th and then flying to Colorado to attend my son’s oldest sons graduation and then walking in the 7 for Sartor Walk Memorial Day (on) the 31st along the highway named in my son’s honor,” said Terri Pryor, mother of U.S. Army Sgt. Maj. James “Ryan” Sartor, killed in action in Afghanistan on July 13, 2019.

“Emma and I will be in Arlington visiting our hero and spending time with our TAPS family,” said Amy Dozier, wife of U.S. Army Staff Sgt. Jonathan Dozier, killed in action in Iraq on January 9, 2008.

“We are going to the ‘Wear Blue, Run to Remember‘ event in the morning. My husband will golf later,” said Karen Servis Funcheon, mother of U.S. Army Sgt. Alex Funcheon, killed in action in Iraq on April 29, 2007. “I will be giving a talk on the history of Decoration Day to an assisted living and a health care facility.”

“I will be walking in Carry the Load. I can talk to people about Jay,” said Beth Strickland Funk, mother of U.S. Army Sgt. Joshua “Jay” Strickland, killed in action in Afghanistan on September 21, 2013.

“Spending memorial day at the New Hampshire Veterans Cemetery visiting not only my brother, but as the NH Survivor Outreach Services Support Coordinator I am visiting the graves of service members whose families are not able to visit that weekend,” said Stephanie Ouellette, sister of U.S. Marine Cpl. Michael Ouellette, killed in action in Afghanistan on March 22, 2009.

“Attending the Staten Island Memorial Day Parade with my family being a part of it with my Dad in his Vietnam uniform and all of the family riding in a patriotic vehicle. Also attending a BBQ after,” said Kimberly Ollis-Loschiavo, sister of U.S. Army Staff Sgt. Michael Ollis, killed in action in Afghanistan on August 28, 2013. “Also attending a walk of fame pathway ceremony at a local VFW in Spotswood, New Jersey.”

“Go and visit our son and brother’s grave. Put new flowers and flags and spend time together as a family,” said Joelle Ellis, mother of U.S. Army Spc. Robby Ellis, killed in action in Afghanistan on June 18, 2013.

“We don’t live close to our family’s graves, so this year we will help our neighborhood place flags at the entrance so that everyone can remember freedom isn’t free,” said Phyllis Sisson, mother of U.S. Army 2nd Lt. Justin Sisson, killed in action in Afghanistan on June 3, 2013. “We remember.”

“Placing flags on all the gravesites at the Alabama National Cemetery in Montavalo. Laying memorial wreaths at the small ceremony they have honoring all branches of the military and the Gold Star moms. I will be laying the wreath for the Gold Star moms,” said Charon Rivers, mother of U.S. Marine Lance Cpl. Thomas Rivers Jr., killed in action in Afghanistan on April 28, 2010. “And of course visiting my son Thomas’ gravesite. Afterwards we will go to the lake because that’s where Thomas would want to be!”

As these remarkable people remember and reflect, let us all join together and say a prayer for their families. God blessed our country with their departed loved ones, all of whom were the best America had to offer. The Lord has also given America the gift of these Gold Star families, who selflessly embody the courage and commitment of their fallen heroes.

For each of the eleven extraordinary Americans whose poignant words appear above, every day is Memorial Day. Like the parents, spouses, siblings, sons and daughters who made the ultimate sacrifice, Gold Star family members are national treasures who deserve our endless gratitude and respect. To them, we owe everything.