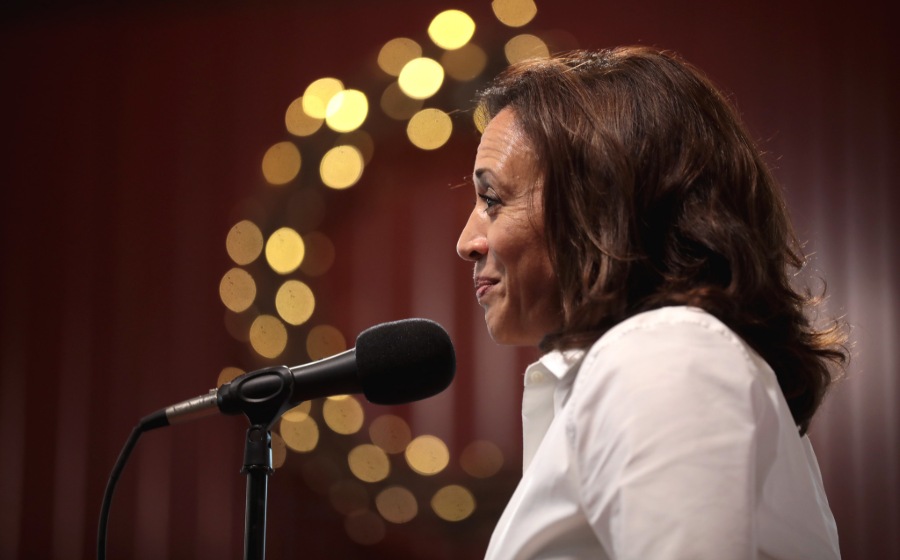 Sen. Kamala Harris, D-Calif., speaks to attendees at a fundraiser hosted by the Iowa Asian and Latino Coalition at Jasper Winery in Des Moines, Iowa, on Aug. 10, 2019.

Did you know that Vice-President Mike Pence only broke into politics by serving as the boy-toy of a rich, powerful politician much older than him? That his “sugar-mommy” flaunted her affair with Pence, even though she was still married? So he slept his way to the middle.

Did you further know that this power-broker relied on cult leader David Koresh to steal elections, and protected Koresh from scrutiny for abuse —helping to guarantee the tragic outcome in Waco, Texas?

No, of course you didn’t, because none of it ever happened. At least not to Pence. That’s Kamala Harris’ story I just told. Her sugar daddy was San Francisco Mayor Willie Brown. And the cult leader whom Brown depended on and supported to the bitter end wasn’t David Koresh. It was the far more vicious cult leader, Rev. Jim Jones.

That’s right, Kamala Harris is just one degree of separation from a murderous, Marxist suicide cult. But don’t bother pointing that out — it will just get you dismissed as a nutcase.

There’s kind of an easy formula for writing political satire these days. It goes like this:

Step 1: Pounce on a Democrat Outrage

First take something outrageous the Democrats have done and totally gotten away with. Something that Establishment Republicans wouldn’t fight or even criticize. Something only the most dogged and lonely conservatives tried to resist.

Of course, in the face of our media — more biased and lockstep than East German State TV ever was — and other rigged or infiltrated institutions, we failed. Now everyone takes this leftist stunt for granted. It’s normalized, a fact on the ground.

Some of us are desperate to prove to the liberals we knew in college, who work at NPR or NBC, that we’re not like “the others,” the wacko conservatives.

If you still complain about it, people treat you like a loser. And in one sense you are: you lost. You pointed out that the Emperor had no clothes, but nobody believed you. So now he struts around dangling his glory, while everyone rushes to patronize the designers who made his “suit.” Now anyone who says otherwise gets waved off as a “sartorial fundamentalist,” or an “alt right couture theorist.”

Step 2: Just Imagine Republicans Getting Away with It

Second, concoct a fantasy of Republicans doing the same thing, or something objectively equally outrageous. That is, if there were similar standards applied across the whole political spectrum. Work it out in detail, plugging in one fictional right-wing equivalent to each actual left-wing fact. But imagine the right somehow getting away with this stunt, a compliant media carefully covering it up, making excuses, or accusing anybody who complained of crassly “pouncing” on an innocent faux pas.

Third, write this up in a deadpan fashion, making it as persuasive as possible. Count on the reader to gradually realize that of course it’s a satire, since only the left gets away with this kind of garbage. The right wouldn’t even try. In fact, when right-wingers cross moral lines, it’s typically other conservatives who pounce on them first to correct them.

In part that’s because some of us have higher moral standards. But another huge factor is that we have almost no internal loyalty left. We act like a bunch of crabs in a bucket, pulling each other down. And some of us are desperate to prove to the liberals we knew in college (who work at NPR or NBC) that we’re not like “the others,” the wacko conservatives, so please please please can we write an Op-Ed for your paper, or appear on your talk show? We’ve got this new smug autobiography/ bland spirituality tract/ tell-all exposé trashing other conservatives, and it’s not going to promote itself.

Too many conservatives act as if they were already in a left-wing internment camp. And they’re happy to police the other prisoners in return for an extra serving of delicious fish-head soup. Or a pat on the head from the guards.

Step 4: Watch It Fizzle Since Nothing Matters, This Is Clown World

Then you publish the piece. If you did a good job, people will find it convincing. They won’t notice how absurd it seems, because events have wheeled so far out of control in reality, that parody is indistinguishable from regular headlines. Or else it gets cannibalized by them. Everything is The Babylon Bee.

For instance, when I wrote back in March that the same liberals, such as New York’s Andrew Cuomo, who support Drag Queen Story Hour to spread gender dysphoria to children, might as well favor Coronavirus Story Hour in nursing homes to spread that disease to seniors.

That joke stopped being funny when … it turned out that Cuomo was doing exactly that. He was dumping virus patients on nursing homes, even though there were plenty of empty hospital beds. Thus even as he agonized on TV with his dimwit brother Chris about the safety of their mom, Matilda, he killed off thousands of elderly New Yorkers for no apparent reason at all. So did big Blue State Democrat governors in New Jersey, Pennsylvania, and California.

Only a few conservative media have tried to hold Cuomo or any other “Snuff Film Governors” to task for this mass slaughter. Leftist organs, in absolute lockstep, have resolutely ignored it. Meanwhile Anthony Fauci discredited himself in the eyes of any honest person by citing Cuomo as one of the best leaders during the Coronavirus crisis. But if you criticize Fauci, or Cuomo, or big stacks of dead nursing home patients, you’re marginalizing yourself as a wacko.

Democrats Really Could Shoot People on 5th Avenue. Soon They Will.

It’s okay that the governor of Virginia dressed up either in blackface or a Klan hood. If he were a Republican, a joke about Chinese food making him hungry an hour later would be enough to force him from public life. And that’s fair and just, so learn to accept it.

In religious circles: Jerry Falwell, Jr. posted a tasteless photo online, so he must be deposed from running Liberty University. Archbishop Wilton Gregory of Washington, D.C., colluded with child molester Ted McCarrick to exempt bishops like themselves from any penalty. Either for covering up for pedophiles, or molesting kids themselves. Gregory doesn’t have to resign. In fact he keeps moving up and up, while bashing President Trump for imaginary “racism” and “xenophobia.” Even bald-face lying about Trump, when that comes in handy.

Do you get it yet? It’s okay that Kamala Harris was all in on Jussie Smollett’s “racist” noose hoax. On Julie Swetnick’s rape-gang slander, and Christine Blasey Ford’s perjury. It would not be okay if Mike Pence talked about George Soros’ efforts to control the elections of U.S. district attorneys nationwide. (For instance, the St. Louis prosecutor who charged the McCloskeys with a felony for defending their home.) Even though that one is true.

It’s perfectly fine that the Democrats spent three and a half years trying to nullify the 2016 election with insane, made-up conspiracy theories, “pee tapes,” and witch hunts of men like Mike Flynn. It’s an outrage when GOP senators even try to force the main players to testify.

What Is Truth? (LOL)

It’s fine that Democrat governors and mayors, and senators like Mazie Hirono, endorse Antifa violence in the streets of our cities. It wasn’t okay that Donald Trump pointed out that most of the conservatives in Charlottesville three years ago were Civil War monument fans, whose event got hijacked by a small group of skinheads. It doesn’t matter what’s true. It doesn’t matter what’s fair.

It matters who has the whip hand. If America gives them free rein this November, watch out. Willie Brown’s protégé, Harris will channel his old ally Jim Jones. The Democrats will Make America Jonestown Again.

And I wish I meant that satirically.