Just imagine if the Republicans had acted like Democrats for the past three years. The Stream's John Zmirak has. 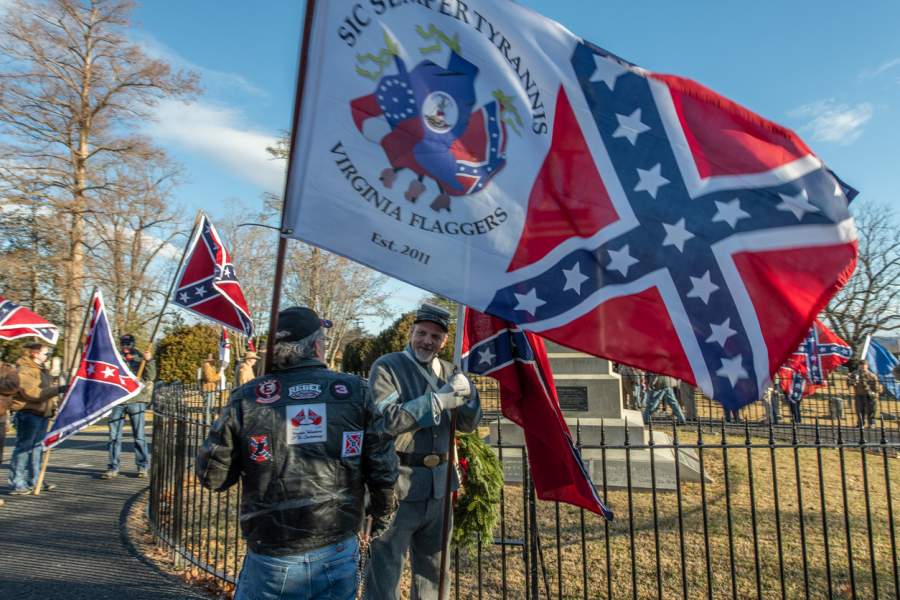 USA, Lexington, Va. January 13th, 2018. Gathering of supporters of the Confederate Flag in celebration of Lee-Jackson-King Day, Virginia's peculiar holiday. This was two years after a small group of white nationalists hijacked a pro-Southern heritage rally.

It was a dark time in America, 2017. We knew the nation had lost its center. This despite the scrupulous civic-mindedness of the Democratic party and the Mainstream media.

The Democrats, as good Americans, gave President Trump a trouble-free first 100 days to set his agenda. As parties have mostly done with other newly-elected presidents. Mitch McConnell in the Senate and Paul Ryan in the House deferred to voters’ decisions. Neither of the men had backed Trump. Neither liked him. But they knew he’d earned the right from GOP voters to reorient the party.

So they moved quickly to fund the border wall which was his signature winning issue. The nation gained control over its porous borders, suppressing crime and human trafficking. That should have made the Right happy. But it didn’t. It only stoked violence.

The GOP Acted Swiftly to Back the President

McConnell and Ryan knew it would be criminally stupid to fritter away two solid years of GOP control. To do that, Republicans abolished the silent, phony “filibuster” in the Senate. It was obvious to all Republicans that the Democrats would do so at their next opportunity. (They don’t feel bound by silly things like “precedent.”) Now if a senator wanted to block a bill? He’d darned well have to give a very long speech. That’s what they used to do up until the 1970s.

Aware that pro-life Americans had been swindled too many times, the GOP leaders acted to reward them for their support. With the filibuster gone, President Trump was able to keep his campaign promise of defunding Planned Parenthood. Most Americans saw the logic of that, in the wake of its proven profiteering from human babies’ organs.

The Democrats weren’t happy about all this, of course. But they remembered Barack Obama’s famous phrase, “Elections have consequences.” So just as most Republicans did under previous new Democratic presidents, the Democrats in Congress stepped back and patriotically let Trump make his own “mistakes,” waiting for the next mid-term election.

The media, while critical of Trump, and holding him to rigorous standards, scrupulously avoided demonizing their nation’s elected leader. Whatever their private sympathies, they valued their professional integrity too highly to turn their news shows into agitprop.

Despite all this, no matter how fair and professionally the left comported itself, President Trump just couldn’t control himself and his secret urges. He wouldn’t rein in the dark, anarchic forces of reckless extremism that bubbled below the GOP veneer. When white supremacists clashed with Antifa protesters in Charlottesville, the president showed his true colors.

Even GOP governors refused to use National Guard units to stop the widespread violence and looting. They pointed to the “protesters’” grievances against urban crime, moral decline, and the almost 1 million American babies aborted each year. In one city after another, abortion clinics burned.

He didn’t just distinguish between the large number of decent historic preservationists and a small band of white nationalists who engaged in violence. No, he insisted on defending all of the demonstrators. He even had the temerity to champion far-right rioters clad in body armor, wielding lasers to blind police officers, as “peaceful protesters.”

That statement by the president gave the green-light to far-right riots across the country. In one Republican-controlled city after another, far-right thugs attacked citizens at gay bars, abortion clinics, and even in their homes. But Republican mayors and governors refused to use force to control them. They followed Trump’s party line that these were “mostly peaceful protesters.

And a cowed media complied. Which network wanted its headquarters attacked by violent mobs, after all?

Even GOP governors refused to use National Guard units to stop the widespread violence and looting. They pointed to the “protesters’” grievances against urban crime, moral decline, and the almost 1 million American babies aborted each year. In one city after another, abortion clinics burned, and police would do nothing. In some cities, Republican mayors and legislators proposed abolishing the police altogether, which would leave those cities entirely in the hands of the right-wing zealots.

The GOP Consented by its Silence

Donald Trump and his party looked on. When Senator Mazie Hirono of Hawaii demanded of Texas Senator Ted Cruz that he denounce the “Profa” activists’ pattern of public violence, Cruz was pointedly silent, just giving a creepy smile.

And now, with a track record of endorsing and enabling mass violence in cities across America, costing hundreds of millions of dollars, and imposing a reign of political terror on anyone who dissented, the Republicans have the sheer gall to ask Americans to return them to power this November. They have offered no plan to stop the widespread violence. They haven’t distanced themselves from the thuggish street toughs who swagger through major American cities. Instead, they want to soak “blue” states with taxes to rebuild the cities far-right activists burned in “red” states, while GOP mayors fiddled.

They’ve given us no reason to think that if their party controlled the White House and Congress in 2021 the chaos would get any better. Though some have threatened darkly that if their candidate loses, still more severe street violence would erupt across the country.

Can any responsible American honestly vote for this man, this party?

Thank you for engaging in this thought experiment. Now back to our regularly scheduled programming.

In the Middle East, Trump Protected Christians, While Biden Got Them Killed