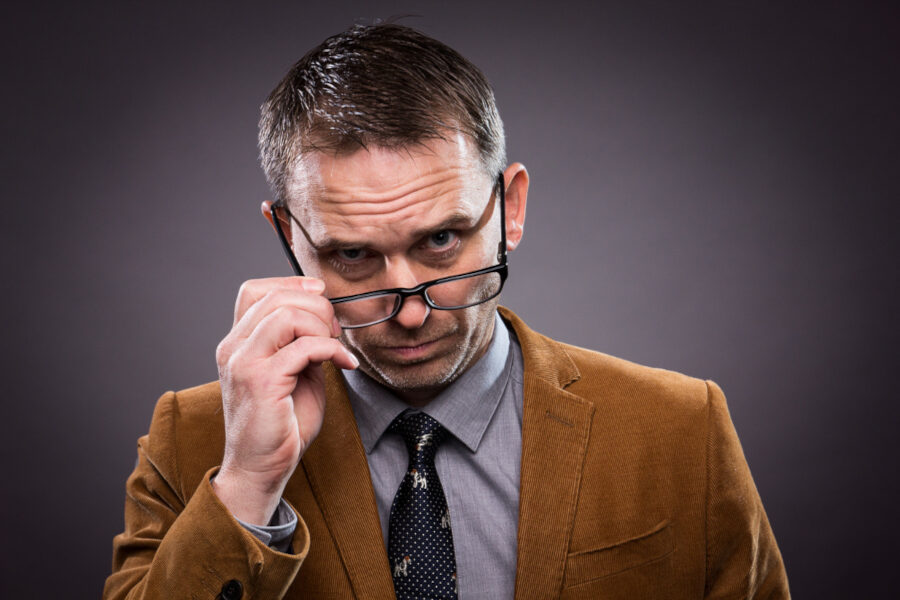 There was a time — I kid you not — when a pastor fired me from a church job because in his words, “someone has a problem with you, Tom.” He didn’t know who the “someone” was, or what it was they thought I’d done wrong. The committee member who’d heard about it hadn’t bothered to let him know. The pastor fired me anyway.

I had a pretty good idea where the complaint came from. It had happened months before. I’d brought it immediately to the pastor’s attention, owning my own fault in it. He ignored it.

I had two more meetings with the pastor over that firing, and he never did tell me who the “someone” was, or what the “problem with me” was. For that reason and others, I knew I had to leave the church. Another pastor at the last meeting told me, “Tom, you can’t leave. This is your family. You need us to help you grow through this.” I answered, “I am very sure I need to grow. I know I have faults. But I’ll go somewhere else where they’ll tell me what they are, so I actually get the chance to grow in them.”

The pastors’ rebukes were muddled. Useless. They did nothing good for me, except to show me I was in the wrong church. It’s a lot like the recent “Evangelical Leaders [sic] Statement Condemning Christian Nationalism’s role in the January 6th Insurrection.” The statement is a masterpiece of obfuscation.

Signed by some two thousand or more “leaders in the broad evangelical community,” it comes across as a stinging rebuke to evangelicals, especially white evangelicals. But it’s just as muddled, just as worthless, and possibly just as misdirected as the one I got from that pastor — although who can tell? The whole thing is too muddled to know for sure.

It’s not exactly “someone has some problem with you,” but it’s just as worthless. Every key term in it is either undefined, poorly defined, or outright self-contradictory. That makes it both strange and unhelpful.

Muddle 1: They Call Themselves Evangelicals

Even stranger, I can’t even tell you who’s got the problem with us. Oh, they’ve signed it plainly enough, each one of them, but some of them signed it under false “evangelical” pretenses.

The statement opens with, “As leaders in the broad evangelical community, we recognize and condemn the role Christian Nationalism played in the violent, racist, anti-American insurrection at the United States Capitol on January 6.”

I’ve been an evangelical more than 45 years. I thought I knew what the word meant. An evangelical is usually — though not necessarily — a Protestant who believes in the full truth and authority of the Scriptures, as understood in accord with historically validated principles of interpretation. It’s someone who recognizes Jesus as the Son of God, God in the flesh, who lived, died, and rose again to redeem us from our sins. It’s someone who places first importance on personal salvation by grace through faith. Evangelicals also generally recognize the Bible’s historic, traditional, and ongoing moral authority.

Who Are They, Really?

It’s a clear enough definition, and it’s been around as long as most of us have been alive. So why do 70 percent or more of this list of “broad evangelical leaders” not fit into it? I pulled a random sample of the 227 apparently original signers, and found 80% of them (with a margin of error around 10%) describing themselves in distinctly non-evangelical terms.

Some of them on their own websites call themselves “progressive,” or “emergent,” words that strongly signal something other than evangelical belief. Others welcome homosexuality — not just homosexual persons, but homosexuality — in their churches. Many of them represent denominations that have shifted hard in that direction.

One is co-pastor of a Minneapolis church whose Facebook page currently features a poem beginning,

It doesn’t interest me if there is one God
or many gods.
I want to know if you belong or feel
abandoned.

You can’t get from “evangelical” to “it doesn’t interest me if there is one God,” without five or ten days’ hard driving to the left. And off a cliff.

When a gospel-denier like Richard Rohr is in the group, what does “broad evangelical community” even mean? And why did Tony Campolo sign it, when he’s publicly disowned the evangelical label?

I hate to say it, but based on my sample, seven out of ten original signers put their name to it dishonestly. The rest were careless at best. I’d never put my name to a document that included Rohr as an “evangelical,” or would fold a potential polytheist into the group.

So who is it who has the problem with us? Sure, they put their names on it, but this group still mislabeled its identity.

Then there’s “Christian nationalism.” If Christian nationalism means actual Christians putting either race or country above God, I’ll condemn it as loudly as anyone. But is that how people usually use the term? That’s a serious question. I’ve tried to nail down a definition, and instead I’ve found people using it as loosely as they like for their own political purposes. The best you can do is figure it out from the context.

This statement says, “On January 6 we saw the flags claiming Trump’s name, calling for violence, and raising the name of Jesus. … We saw and heard the prayer the insurrectionists prayed from the Senate desk in Jesus’ name. Many of us recognized the content, the structure, and the style of that prayer as matching our own churches and faith.”

I stand firm against Christian nationalism when it means Christians putting race or country above God. I’ll stand just as strongly against nationalists dishonestly co-opting Christianity. And right now I’m appalled at “leaders in the broad evangelical community” who won’t bother discerning which is which.

They should know the difference between Christians who give the faith a bad name, and people who pretend to be Christians but aren’t. One needs a brotherly rebuke. The other needs clear and carefully-worded distancing, so that they and the world may know their actions are not the actions of Christ’s people.

You can’t get from “evangelical” to, “it doesn’t interest me if there is one God,” without five or ten days’ hard driving to the left. And off a cliff.

Some people, though, say a white supremacist is any white person who isn’t “antiracist.” Now, there, at least, we have a word whose meaning we know. It comes straight from Ibram X. Kendi’s book of that name. We know it, but that doesn’t mean it can’t get muddled, too. Worse actually: This “evangelical leaders” statement says we Christians should be antiracist, when antiracism of this sort is in fact anti-Christian. It’s totally self-contradictory.

A Proper and Much-Needed Rebuke

Muddled rebukes do no good. A proper rebuke makes it clear who we’re talking to and what we’re talking about. It’s specific about how a person should change. It’s careful not to lump groups together falsely, and not to accuse one person of another’s fault. That’s how we should offer rebuke to a brother or sister, when rebuke is called for.

I trust I’ve been clear enough who I’ve been talking to and what I’m talking about. That’s how I offer my rebuke today to brothers and sisters who signed this statement, along with some others who are only pretending to be in the family. They need rebuking, for their specific errors.