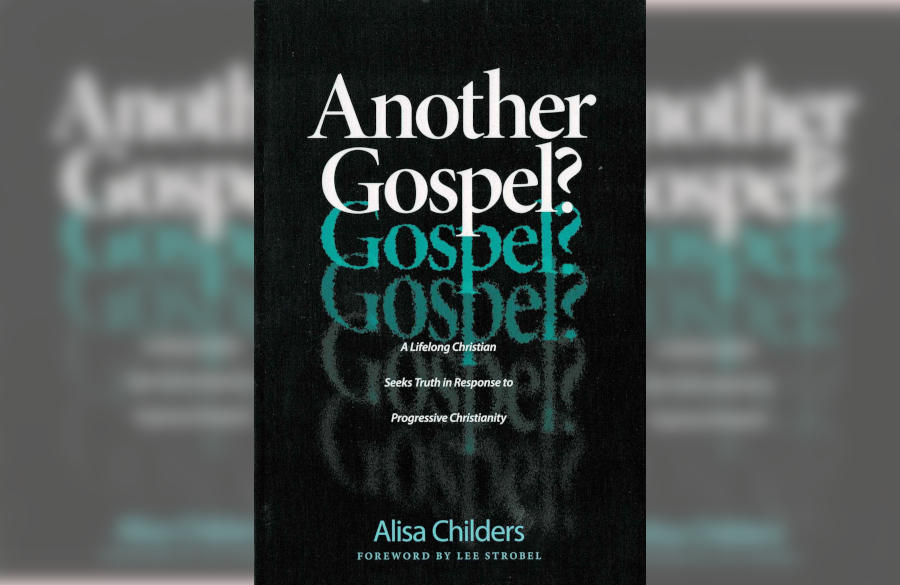 Alisa Childers started out with a solid enough Christian background. Her dad, Chuck Girard, was one of the great pioneers of contemporary Christian music, and she herself sang in the popular CCM group ZOEgirl. It all came under severe challenge, though, when she came face to face with progressive Christianity.

It was at the church she and her husband were attending for a time, where a pastor had asked her to join an invite-only, exclusive discussion group. She could spend four years in that group, he told her, and it would give her “a theological education comparable to four years in seminary.” She joined the group, not knowing it would produce an “upheaval,” a crisis of faith, in her life.

She never identifies this pastor, but she does describe him: “an educated, intellectual, calm, and eloquent church leader,” a “brilliant communicator” who “had a bone to pick with Christianity.” Thus begins her story, told in Another Gospel? A Lifelong Christian Seeks Truth in Response to Progressive Christianity.

The term “Progressive” identifies a loosely led movement that very much has a “bone to pick” with historic Christianity. It’s “Christian” in the sense that it flows out of historic Christian traditions, and claims to honor Jesus. Their “Jesus” looks a lot like one manufactured to give divine approval to contemporary culture, though, not the God who stands above us all in holiness.

That’s just my quick summary. Childers took a more reflective route to essentially the same conclusion. If progressive Christianity has done one service, it’s been to cause some of us to re-examine our beliefs. For Childers, the progressive discussion group set her on a journey “with rocks in my shoes,” seeking answers to hard questions she hadn’t faced before. What did she really believe? Was it true? How did she know?

The questions multiplied. What about scandals in the church? Aren’t Christianity’s claims to exclusive truth awfully arrogant? Can anyone still believe there’s anything real in the story of Adam and Eve? What about hell: Is there something wrong with God for not forgiving everyone? Does the Cross represent some kind of disgusting divine child sacrifice? Why give credence to such an old book as the Bible?

Christianity should teach a “more generous orthodoxy,” her progressive pastor taught the group, per the title of the first book they studied together. That book’s author, Brian McLaren, invited readers to celebrate all of the “Seven Jesuses” taught by different religions. For Childers it was unsettling, to say the least:

In enlightened bliss, the rest of the class enjoyed a collective “aha moment” as we discussed [McLaren’s] challenge. That left me wondering what was wrong with me. All I cared about was the real Jesus — the one who is described in the Bible. I tried as hard as I could to make the seven Jesuses fit into my paradigm, but I couldn’t.

Hard questions roiled through her mind as she left there that evening.

Why is everyone else so excited about this?

No Easy Answers, No Dishonesty, No Shortcuts

That hard beginning set her on a journey of no easy answers:

After I left the class, I was isolated and alone as the doubts he planted began to take root and grow. For a while, I didn’t understand what was happening to me. I was holding on to Jesus with everything I had, while the foundation of my faith shook as if hit by a tsunami, crashing down on what I thought about church and the Bible. It became difficult to read the “Good Book” that had been painted to me in class as, well … not so good. It was hard to pray.

No easy answers, and no dishonesty, either: “I wanted to progress in my faith. … But I didn’t want to progress beyond truth. … I needed to know what was true.”

Neither was it a journey of shortcuts. She did the necessary work. I laughed when I read what her children listened to while growing up. Instead of Barney the purple dinosaur, it was podcasts and messages she was listening to on theology, intelligent design theory, textual criticism, and the like. “My almost-teenage daughter just asked if I would by her a t-shirt that says, ‘Having a weird mom builds character.'”

Hard questions, no easy answers, no dishonest shortcuts: a tough journey, but in the a fruitful, satisfying one. She did the work; she found the answers. Historic Christianity stands up to the test, she discovered, and she explains how. Her faith is clearly better informed, more discerning, and stronger than before.

I’ve seen in progressive Christianity an air of condescension toward us who still believe “all these ancient fables,” hopelessly stuck in “bigoted” beliefs, lagging far behind today’s “advancing moral knowledge.” Childers faces down such patronizing talk without committing the same error herself.

I might have said that she takes progressive Christianity down. She shows its errors effectively enough — but that’s not exactly her focus. It’s more accurate to say she calls upon facts, evidence, and chapter upon chapter of solid, cohesive thinking to build up historic orthodox Christianity instead.

And she brings a good story along with it, one that I wish and pray would be repeated throughout all of Christianity. Progressive thinking permeates both secular and religious culture. We all have to deal with it honestly: No easy answers, no shortcuts. If you want a solid, readable, and well-researched guide on your own journey, though, you’d be wise to start with this book, and take it with you as you go.

Tom Gilson (@TomGilsonAuthor) is a senior editor with The Stream and the author or editor of six books, including the recently released Too Good To Be False: How Jesus’ Incomparable Character Reveals His Reality — a book to show just how extraordinarily great Jesus is, and how He’s worth following no matter what.