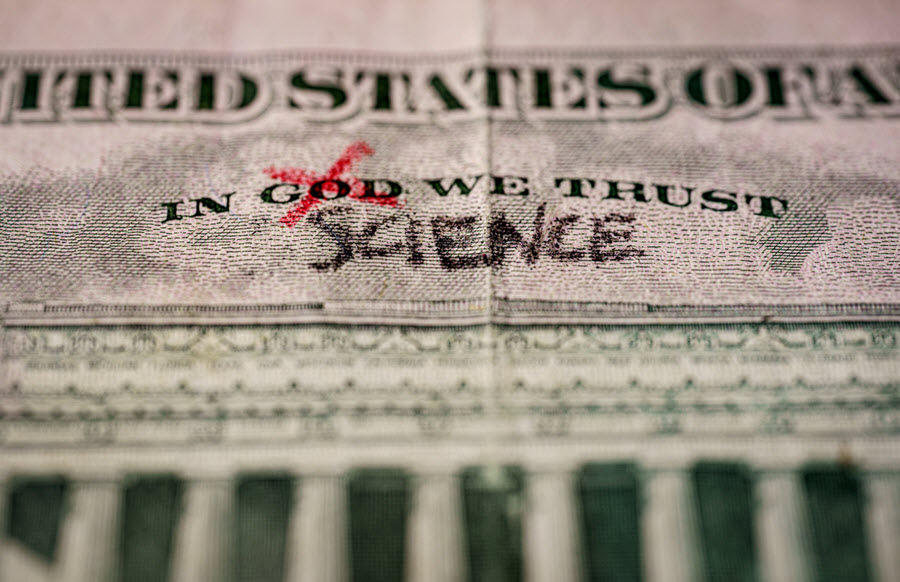 “Science is right, religion is wrong.” Today’s Millennial generation grew up breathing in that message like old Los Angeles smog. Richard Dawkins’ The God Delusion ran at the top of the New York Times Bestseller List for more than a year in the mid-2000s. Under his dubious leadership, the “New Atheists” dominated the atmosphere for more than a decade after that.

The movement has fallen apart from in-fighting, but their effect remains. According to new research from George Barna (PDF here) the Millennials who grew up in that era have become the first generation of American adults in which the “Don’ts” — those who don’t know, don’t care, or don’t believe in God — outnumber those who say they believe in the God of the Bible.

Science isn’t the only reason they’ve abandoned the faith. It may not even be the main reason. As Christian worldview expert Larry Taunton says, though, it’s likely to be the first reason they’ll claim for it. It’s also the first line of intellectual assault faced by Christian college students. I’ve heard from many who’ve said, “I got to college and found out I couldn’t believe in science and Christianity at the same time.”

If Only They Knew

This article is the second in a series of “Practical Ministry Explainers” on spiritually relevant cultural issues, especially for pastors and other Christian leaders. We want to serve you, the pastor, by providing you accessible, accurate information in a form you’ll find useful for ministry. Most articles will follow a standard template. (This one departs from it , but only slightly.)

We’re launching a new thing here, and we want to serve your needs. We’re eager to hear your feedback on what’s helpful, what isn’t, and what you may want us to add.

I’ve covered all that in a series of recent articles here at The Stream, detailing the many myths plaguing the faith-science story. They’re not just wrong, with a little background info they’re obviously wrong. Some of them are even ridiculously wrong. Yet many of us believe them anyway, mostly because “everyone else believes it,” but also because we’ve never been told the truth. Now’s a good time to correct that.

We can start by tackling the myths head-on. Here are some of the big ones:

Distinguishing Between Science and Scientism

We need also to distinguish between science and scientism. The names sound alike, and a lot of people — scientists included — don’t know the difference, even though it’s huge. Christianity is not opposed to science, properly understood, but the faith definitely stands against scientism.

Scientism is the view that nothing is true unless it’s scientifically true, or “you can’t know it for sure unless you know it scientifically.” It’s had seriously destructive influence in our world, which is strange, since it only takes a second’s thought to show it can’t be true. Its core principle, that no belief is true (or knowably true) unless it’s a scientific belief, isn’t a scientific belief itself! You can’t measure it in a test tube, and you can’t experiment on it in a lab. Like a snake eating its tail, scientism self-destructs on its own guidance.

As I said, too many people have trouble telling the difference between science and scientism. “You believe in God?” they ask. “How scientific is that?!” They expect us to cower under the mockery. We don’t need to: Our belief in God has more science supporting it than they realize, but it’s still not properly speaking a scientific belief. Science studies nature, not the supernatural. The one who thinks God should be a scientific belief is basically saying God should be part of nature.

We Can Oppose Scientism Without Opposing Science

Besides that, we all hold many non-scientific beliefs. I believe I love my kids. I believe 2+2=4. (Math doesn’t flow from science; if anything science flows from math.) I believe there’s no such thing as a married bachelor.

I believe that George Washington led the Army of the American Revolution, that Napoleon led another revolution in France, and that Jesus walked the earth as God in the flesh. I hold those beliefs as matters of personal experience, logic, testimony and history, not science. So yes, it’s okay that they’re not scientific.

So we can and we should oppose scientism. That has nothing to do with our views on science itself. As long as it’s properly done and properly interpreted (without scientistic bias, for example) science reveals portions of reality. If it tells the truth about that reality, then it’s telling truth about what God has done. God can’t contradict Himself, so His truth in nature can’t contradict His truth in Scripture. It’s all God’s truth.

This is all very encouraging to know, but how do we move from knowledge to ministry? How do you make it make a difference in your people’s lives? I’m going to suggest a few different approaches.

You can mix and match them at will. You can also read or listen to an introductory sample sermon I’ve prepared on this. You’re welcome to borrow freely from that sermon, up to and including all of it (with proper attribution, naturally).

We need to bear in mind just how entrenched the Western world is entrenched in the “scientific way of thinking.” It’s still true, despite declining public trust in science over the past few years. Good strategy says it’s a bad idea to try attacking such a strongly fortified position head-on. So my first suggestion is that you end-run it instead: Talk about science-faith myths.

In my recent science-faith series I started with a softer target: the myth that Medieval people believed the world was flat. The idea there is to help the person realize it’s possible they’ve got some things wrong.

From there it’s a short step to de-mythologizing other beliefs, such as the supposed warfare between science and faith. They’ll be more ready to accept the big correction once they’ve made it through the smaller one.

In this series and for this topic I’ve focused on whether science and faith are intrinsically at odds; whether faith is the kind of thing that opposes science by its very nature.

The evolution question is different: It’s a matter of whether Christians agree or disagree with one specific finding (supposedly) from science. So it’s a different question, and it’s huge one. For that reason we have to save it for a different explainer topic of its own, to be run at a later date.

We need to find out where people have issues with science and faith. Sometimes the more we listen the better we can teach. In small groups or individual conversations, good questions can help us know what to focus on. Sometimes good questions can even teach. For example, teaching on scientism:

“What’s your opinion: Do you think it’s possible for something to be true without being scientifically true?” Then, “So let’s make sure we’re clear: Are you saying that a statement that isn’t scientific can’t be true?” And finally, “What about that statement itself: Is it scientific?”

What’s your opinion: Does science disprove faith? What do you mean when you say that? How did you come to that conclusion? Can you give some examples?

Let’s face it, though: These are just starters. I hate to say it, but the “science-vs.-faith” belief is so deeply seated in our culture — and in many of your church members’ minds — small steps won’t root it out. Starter steps on their own are like rubber bullets against a troop of would-be invaders. They do a little good, but not necessarily enough good.

It isn’t the general’s job to fire the artillery, though, and it sure doesn’t have to be the pastor’s job to do all the teaching. Of course you know I’m echoing Eph. 4:11 and following as I say that. Chances are there’s someone in your church who just loves these topics, who has some teaching skills, and who’d totally fire up if you asked him or her to read up and teach on it.

Maybe you know who that person is already, or maybe they’ll reveal themselves after you give a starter science-faith message at church. If they’re not totally ready to teach, maybe they’ll lead a weekly reading group. I’d suggest they start either here, with my science-faith myth series, or one of the books listed below.

It’s worth the effort. The more we’re ruled by the “science vs. faith” error, The more it rules our thinking, the less space we have in our minds for all the supernatural realities of God. So even if it doesn’t destroy a person’s faith, it can undermine our trust in Him, or our relationship with Him.

The truth remains secure, though. The same God who inspired our Scriptures also created the world. He did not contradict Himself. All truth is God’s truth. We just need to know it!