Brand-New Science or Age-Old Politics? How Everybody Gets the Galileo Story Wrong 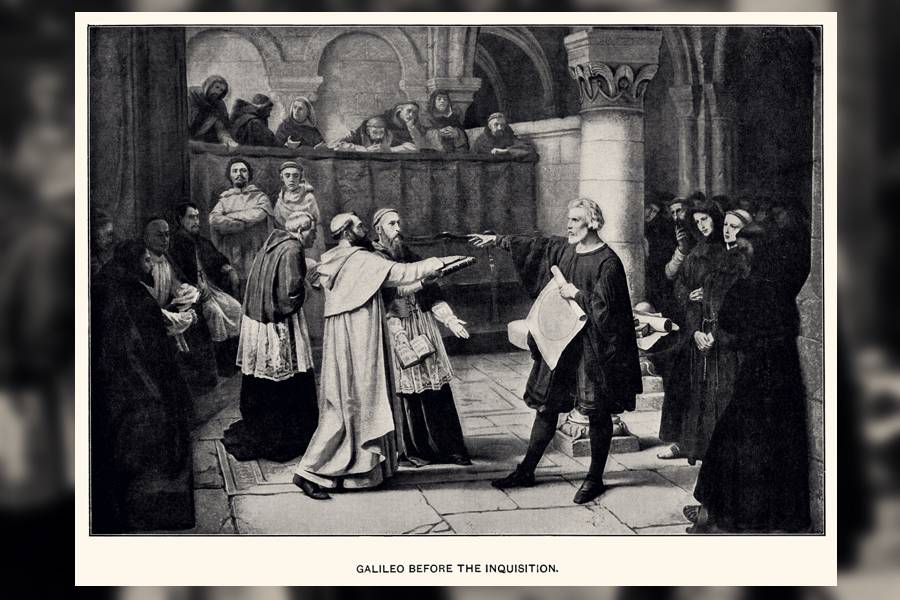 We’re busting myths about science and religion, and the first one went down easily: No one in the Middle Ages thought the world was flat. Even Wikipedia gets it (mostly) right. The next fable we’ll look at is even more entrenched, and more important. When we’re done here, though, you’ll be shaking your head again, asking, “How did anyone ever believe that?”

You know the story. Science was rising up to challenge cherished beliefs, and the Church wanted nothing to do with science. It persecuted Galileo and burned Giordano Bruno at the stake, just for doing science. Before that the Church hounded Copernicus, and after that? Well, let’s just say it’s a good thing the Enlightenment came along, so that civilized people could finally let go of all that Dark Age irrationality.

That’s the story I was taught in school. Now it makes me laugh. I only wish they’d teach it as the comedy it is.

Myth 1: Copernicus Got in Hot Water With the Church

Let’s start with Copernicus, the Catholic clergyman who demoted the earth from its favored position at the center of the cosmos, claiming the sun was at the center instead. Wait, did I say clergy? Yes, he was a Catholic canon, not ordained, but voluntarily under Church authority, and choosing celibacy like a priest. Many of the early scientists were clergy.

But no one thought the center of the universe was the favored position. It was more like the bottom, the basement, the place where the dregs would fall. So much for church and “center” being the issues.

Still he hesitated to publish his theory, not because of the Church but because of scientists. Scientists can be conservative in what they believe, too, and besides, he still had the planets revolving in circular orbits, which was beastly difficult to fit with astronomers’ observations. If that wasn’t bad enough, he had an even bigger problem with the apparent immobility of the stars. If the earth was moving, around the sun, shouldn’t we see the stars changing position, too?

Years later Johannes Kepler helped showed planetary orbits are ellipses, not circles, and astronomers began realizing how incredibly distant the stars must be. Before then, though, not even Galileo’s famous telescope was enough to establish the theory, as Christopher Graney shows in an article delightfully titled, “How Marius Was Right and Galileo Was Wrong Even Though Galileo Was Right and Marius Was Wrong.”

Myth 2: Galileo Was the First of Many Casualties in the Church’s War on Science

Someone told me once, “You’ve at least got to admit the Church got it wrong sometimes, like with Galileo.” I answered, “The Galileo story isn’t exactly what it’s made out to be, but suppose it were. Suppose Galileo is an example of how the Church persecuted science. Name the other example.”

There is no other example. If you’re looking for stories about the Church persecuting science, you won’t find slow news days, you’ll find slow news centuries.

The myths keep crumbling before the facts.

You can test it out yourself. Next time you hear someone saying Galileo was an example of bad blood between religion and science, ask them like I did: “Really? Tell me the other example.”

Myth 3: Giordano Bruno Was Burned at the Stake for His Science

They might try telling you about Giordano Bruno, as one web site did:

Throughout his life Bruno championed the Copernican system of astronomy which placed the sun, not the Earth, at the centre of the solar system. He opposed the stultifying authority of the Church and refused to recant his philosophical beliefs throughout his eight years of imprisonment by the Venetian and Roman Inquisitions. His life stands as a testimony to the drive for knowledge and truth that marked the astonishing period of history known as the Renaissance — from which so much in modern art, thought and science derives.

I’m glad I didn’t have to type that myself. I’d have been laughing too hard; I never could have gotten through it. The source is the World Socialist Web Site, which says it all. Still you’d think they’d try harder not to make such fools of themselves.

Yes the Inquisition did burn Bruno alive in 1600. That was wrong, it was abhorrent, it was worthy of all disgust and condemnation. But just because it was wrong doesn’t mean atheists and socialists can co-opt it for some faux-glorious “drive for knowledge and truth.” Bruno was no scientist, but a magician instead — not an illusionist like David Copperfield, but the occult, superstitious sort. He believed the earth had a soul, and that we have seasons because the earth wants to have them. Scientist? Hah! Put that in your Bunsen burner and smoke it.

Further, he was convicted on a charge of eight specific heresies, and though the list hasn’t survived, it’s of no matter. Historian James Hannam tells us it couldn’t possibly have included his “championing” of the Copernican system: It wasn’t legally heresy. Nothing is until the church declares it so, which didn’t happen until 16 years later.

Myth 4: Galileo Got in Trouble For His Scientific Beliefs

The myths keep crumbling before the facts. There’s still one more remaining for us here: Didn’t Galileo get tossed in prison for standing up for science against the pope?

Yes and no. More no than yes, though. Science wasn’t the main issue. Church officials had doubts about his theories, but they were in good company. A lot of scientists also had doubts at the time. (The Marius story above is just one example.) On the other hand, Galileo had friends at the Vatican who supported him as a scientist. And by the way, he believed in the Christian religion to the end of his life. Pope Urban VIII actually liked Galileo. He sympathized with his theories, and gave Galileo six audiences, before things went sour.

Galileo’s troubles began when the influential Cardinal Bellarmine began to insist that certain biblical passages must be read as literally true — including passages everyone today would instantly recognize as figures of speech. It was an unusual view in that day, but influential enough: He was able to get the sun-centered cosmos officially declared heresy.

Things were going south at that point, but it never turned really rotten until it turned political. The pope asked Galileo to write out his theory, but to refrain from declaring it proved. Galileo did so by making it a conversation between three characters. The one representing the pope’s preferred geocentrism, he named “Simplicio.” That’s right: He was calling the pope a simpleton

Maybe in easier days they could have worked it out. (Maybe I’m trying hard to be optimistic.) But these weren’t easy days for the pope. The Protestant Reformation was in full force, posing a dangerous threat to the Church’s northern reaches, and serving as a clear sign of internal abuses that had to be addressed. Embattled thus on multiple fronts, the pope was in no mood to have his authority challenged that way — not to mention his mental capacities.

Galileo was a scientific genius, but here he was, picking a political fight with the pope, and doing it on the pope’s own turf. Not exactly a genius move on his part.

If there’s one great lesson to learn here, it’s that no one’s great at everything. Galileo was a scientific genius, but here he was, picking a political fight with the pope, and doing it on the pope’s own turf. Guess which one had more political power? It wasn’t what you’d call a brilliant move on Galileo’s part. The Church sentenced him to life in prison, and the pope, relenting somewhat, immediately commuted it to lifelong house arrest.

Wrong? Sure, But Not That Kind of Wrong

The Church was wrong; we can all agree on that now. But there’s a big difference between being wrong politically and being wrong scientifically or theologically. If you call a man a moron you’re cruising for trouble — especially if he’s got that much power, and he’s under that much pressure. It doesn’t matter how right you are, you’re still asking for it. That’s what Galileo did, and that’s what he got for it.

So down goes another religion-science myth. I’m just clearing away rubble here, mind you; just exploding some of the great and nasty lies and fables that falsely poison our view of Christianity. Soon I’ll share how greatly the Church supported early science. You’ll be amazed to see the great science-religion warfare isn’t just fiction, it’s the exact opposite of reality.

I Thought Science Was Going to Replace God. I Was Wrong.