If you’re not a hard-core traditional Catholic, you might not know much about Archbishop Carlo Maria Viganò. He is the whistleblower among our bishops. Viganò revealed that Pope Francis knew all about then-Cardinal Theodore McCarrick’s sexual harassment of young seminarians. McCarrick’s advances on “handsome” would-be priests were an open secret for decades among his colleagues (and scared seminarians). Finally, McCarrick’s degeneracy got the one-time Archbishop of Washington, D.C., and kingmaker of US bishops, sidelined by Benedict XVI. 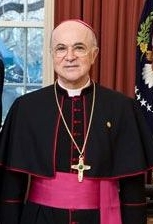 But Francis restored him to favor, despite Viganò’s warnings. Francis looked to McCarrick for advice in picking new US bishops. That’s how we got such progressive dim bulbs as Blaise Cupich in Chicago and Joseph Tobin in Newark. Francis also used McCarrick to squeeze millions of dollars from well-meaning US Catholics, to pay the debts of a corrupt, Church-owned Italian hospital.

Francis even sent McCarrick as the Vatican’s representative to negotiate with China. Here at The Stream I’ve compared the deal that emerged to the Molotov-Ribbentrop Pact, an alliance between two anti-Western powers against the Free World.

A much younger man, James Grein, whom McCarrick had baptized as a baby, accused McCarrick of molesting him as a child for many years. Grein offered evidence, and heartrending testimony. That at least got McCarrick stripped of his cardinal’s hat. But the old molester still lives at Church expense, shielded from the media.

Since Viganò began exposing Vatican secrets, he has had to live in hiding, for his own safety. Perhaps Archbishop Viganò deserves our attention.

In an interview with a German newspaper this month, Archbishop Viganò issued a stark, even apocalyptic warning. If you read the Christian press, you probably come across dire accounts of the dangers of “Christian Nationalism.” But Viganò points to the exact opposite threat: Woke Globalism.

Viganò warns that this ideology’s adherents worldwide have used the COVID virus as a pretext to strip us of personal liberties. And then to give our governments the power to rule by decree. All this in the name of “saving lives,” of course. But in fact these irrational, extreme decisions were made in service of centralizing power in the hands of the very few.

Power and Wealth: From the Many to the Few

Our churches have closed, small businesses have gone bankrupt, families have been sundered. The collapse of small businesses enriched leviathans like Amazon. Media monopolies like Youtube suppressed both political speech on the 2020 election, and dissent from COVID orthodoxy.

Grandmas and veterans were left to die alone in nursing homes seeded with COVID by governors like Andrew Cuomo and Gretchen Whitmer. Why? Could it be to inflate the death numbers? To keep the panic going? To prevent citizens from objecting to still more “emergency measures?” If that sounds too dark to you, remember that these Democrats favor abortion up through birth.

“Two Weeks to Flatten the Curve” and “The British Are Coming!”

Do you remember the March 2020 slogan “two weeks to flatten the curve”? It seems as dated by now as Paul Revere’s “The British are coming!”

In my last column, I laid out the profound moral problems with every available vaccine. Every last one is tainted with research done on aborted babies. Scientists long shunned the research results the Nazis accumulated from cruel experiments on Holocaust victims. But the same multi-billion-dollar pharmaceutical companies that grow rich on “transgender transition” are using research from abortions. We even know when and where each baby died. It’s all in the lab papers.

There’s no abortion-free alternative, and Viganò suggests that this is no accident. He sees the dark hand of the Enemy in the growing pressure for everyone in the world to accept such a vaccine, perhaps at government gunpoint. Most shocking of all, for Viganò, is Pope Francis’ Vatican, which shrugs at the moral problems of using such bloodstained research.

The Woke Cult, Post-Christ and Anti-Christ

Viganò’s explanation for our current state is dark indeed. He summons the specter of Antichrist. And I’m not sure he’s wrong. What we face now isn’t the clunky old materialism of orthodox Marxism. No, what drives the censorship-happy, culture-cancelling global oligarchy (Amazon, Facebook, Disney) and its compliant governments (the Biden regime) is a whole new, false religion. A “new gospel” if you will.

The “Woke” cult stole just enough DNA from Christian sentiments and precepts to make itself contagious. It pushes many of the same emotional buttons as real faith does — the way the most addictive drugs play havoc with our brain’s natural chemistry.

I’ve explained here how Wokeness mimics the structure, psychology, and even the rise to power (after Constantine) of historical Christianity. I confirmed that in a three-part interview with distinguished historian Tom Holland, who neutrally asserts that Wokeness is indeed the Church’s bastard, ungrateful child. Because it retained Marxist methods, goals, and modes of argument.

Now scripture tells us that the real, end-times, big-A Antichrist would be able, given time, even to fool “the elect.” Is that what’s happening when faithful Christians let the left weaponize a false, Marxist meaning of “racism”? When seminaries and Christian colleges bow before the warped fetish of Critical Race Theory? When once-stolid Christian institutions start scrambling to make sure they’re not the prime targets of the incoming regime?

Are we in such end times now? Viganò fears that we are, but asserts that our prayers and resistance might avert them. He urges our fierce refusal of the ever-increasing pressure to conform, comply, and worship this life and this world, instead of seeking the next life with its Author, Jesus Christ.

Don’t Slide Down the Gadarene Slope

I hope Viganò’s fears are exaggerated, folks. But I can’t muster good arguments against them. We must hunker down, use the minds the good God gave us, and resist the pressure of the herd that’s thundering toward the Gadarene cliff by the sea. We can’t be afraid to seem “weird,” can’t cave at fake claims of “racism,” or charges that we’re a threat to “public health.” Similar trumped-up crimes were piled on the early Christians, too.

Dark forces are at work. They’re canceling wholesome children’s books and subjecting kids to drag queen sex offenders. The Democrats seek even now to tear up all ballot security (see HR 1) so they can steal all future elections. And in case that doesn’t work, to open US borders to endless new welfare recipients, given amnesties so they can vote. The government they control hopes to seize our guns, and further silence our speech. Our current vice president tried to imprison pro-life journalists.

And now some wish to force us to inject our DNA with the stolen fruit of aborted kids’ snuffed-out lives. With God-knows what long-term health consequences, since the vaccines were all rushed to market.

Most of our pastors are silent. They don’t want to raise their heads, lest they get them cut off. But “God did not give us a spirit of timidity but a spirit of power and love and self-control.” (2 Tim. 1:7)