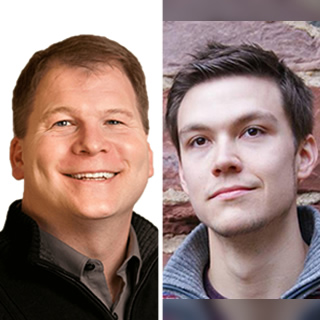 John Stonestreet serves as president of the Colson Center for Christian Worldview. He’s a sought-after author and speaker on areas of faith and culture, theology, worldview, education and apologetics. John is the daily voice of BreakPoint, the nationally syndicated commentary on  the culture founded by the late Chuck Colson. He is also the voice of the Point, a daily one-minute feature on worldview, apologetics and cultural issues. Before coming to the Colson Center in 2010, John served in various leadership capacities with Summit Ministries and was on the biblical studies faculty at Bryan College (TN).

He and his wife, Sarah, have four children and live in Colorado Springs. Connect with John at BreakPoint.org, or follow him on Twitter (@jbstonestreet).

G. Shane Morris is a senior writer at the Colson Center, where he has been the resident Calvinist and millennial, home-school grad since 2010 as an intern under Chuck Colson. He writes Breakpoint commentaries and columns. Shane has also written for The Federalist, The Christian Post, and Summit Ministries. He also co-hosts Breakpoint This Week and the Breakpoint podcast.

Though election day is behind us and the direction of the country set, politics will most likely continue to overstep into most of our lives and our culture. After all, the presidential campaign season has already begun. Without abandoning the…

Yes, Men’s and Women’s Sports Should Be Separated

Planned Parenthood’s New Revenue Stream is Not a New Direction

Which Theory of Evolution? Toppling the Idol of ‘Settled Science’