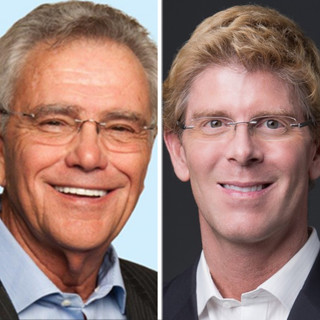 James Robison is the Founder and Publisher of The Stream. He also is the founder of LIFE Outreach International and host of the daily television program LIFE Today, an inspirational series that broadcasts worldwide. In addition to the daily program, LIFE engages in evangelistic outreaches and humanitarian efforts internationally. Robison and his team have helped drill water wells around the world, feed people in crisis situations, establish orphanages and schools, build homes for the homeless and rescue children from sex trafficking.

Jay W. Richards, Ph.D., is the Executive Editor of The Stream. He is an Assistant Research Professor in the School of Business and Economics at The Catholic University of America and a Senior Fellow at the Discovery Institute. He is author of many books including the New York Times bestsellers Infiltrated (2013), and Indivisible (2012), co-authored with James Robison. He is also the author of Money, Greed, and God, winner of a 2010 Templeton Enterprise Award; and co-author of The Privileged Planet with astronomer Guillermo Gonzalez. His most recent book, co-authored with Jonathan Witt, is The Hobbit Party: The Vision of Freedom that J.R.R. Tolkien Got and the West Forgot. He has a Ph.D., with honors, in philosophy and theology from Princeton Theological Seminary.

This Thanksgiving, many Americans are hurting. Though most of us have what we need, millions are either without work or struggling to make ends meet and provide for their families. Even as we thank God for His blessings, we continually…

Why Immigration is Such a Hard Problem