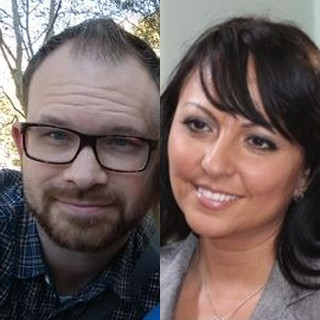 Robert Nicholson and Juliana Taimoorazy < Back to Voices

Robert Nicholson is the Executive Director of the Philos Project. Robert holds a BA in Hebrew Studies from SUNY Binghamton, and a JD and MA (Middle Eastern history) from Syracuse University. A former U.S. Marine and a 2012-2013 Tikvah Fellow, he has published articles in the Jerusalem Post, Times of Israel, Mosaic, Canon & Culture, and Syracuse Journal of International Law & Commerce. An avid student of history, Robert’s heroes include Hugo Grotius, Roger Williams and Frederick Douglass.

Juliana Taimoorazy is the 2014-2015 Philos Fellow. An Assyrian Christian born and raised in Iran, Juliana is the founder and president of the Iraqi Christian Relief Council, an organization that raises awareness about the persecuted church in Iraq and helps Assyrian refugees resettle in the US. Smuggled out of Iran in 1989 to avoid religious persecution, Juliana sought asylum in America and obtained her MS in Instructional Design from Northeastern Illinois University. Since then she has held numerous positions in media and the nonprofit world, and has advocated on human rights everywhere from television and radio to the halls of Capitol Hill. She enjoys reading nonfiction, listening to opera and classical music, and disrupting polite conversation with talk of religion and politics. Juliana is fluent in Farsi and Assyrian.

A New Free State for Christians in Syria?

The recent murder of three Syrian Christians by ISIS is the latest chapter in the tragic history of the once-mighty Assyrian nation. Unfortunately most journalists covering the story focus on the generic plight of “Middle Eastern Christians” and the well-intentioned…