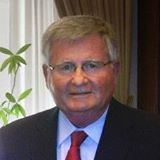 Richard Bishirjian < Back to Voices

Dr. Bishirjian was Gerhart Niemeyer’s teaching assistant at Notre Dame. He was an assistant professor in the Department of Politics at the University of Dallas in Texas, chairman of the Political Science Department at the College of New Rochelle in New York, and founder of Yorktown University, where he served as President and Professor of government from 2000-2016.

He served as a political appointee in the Reagan Administration and in the administration of George H. W. Bush.

He is the editor of A Public Philosophy Reader and author of three books: The Development of Political Theory, The Conservative Rebellion, and The Coming Death and Future Resurrection of American Higher Education. His most recent work, Coda, is a novel published by En Route Books and Media. His three most recent scholarly studies are Ennobling Encounters, Rise and Fall of the American Empire, and Conscience and Power.

Dr. Bishirjian’s essays have been published in Forbes, The Political Science Reviewer, Modern Age, Review of Politics, Chronicles, the American Spectator and The Imaginative Conservative.

Stream editor John Zmirak has regularly pointed readers to the writings of political philosopher Angelo Codevilla, who in fact wrote a piece for the Stream some years ago. A staunchly “realist” man of the Right, Codevilla diagnosed the profound corruption…