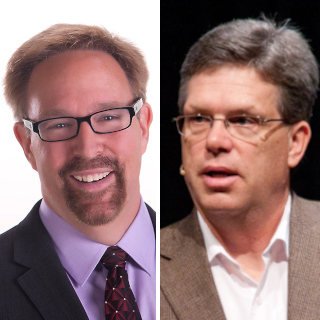 Marc Newman is president of Speaker for Life, a training firm dedicated to equipping pro-life advocates nationwide with public speaking skills. He has spoken at nearly every major pro-life convention in the nation and is in demand as a banquet keynoter. He is the former Director of Speech and Debate at the University of California at Irvine, and is retired from teaching in the doctoral program in the School of Communication and the Arts at Regent University. He has trained speakers in the public and private sectors for over twenty-five years. Additionally, he is the CEO of SpeechRamp, a company revolutionizing the way that public speaking is taught at colleges and universities nationwide. He has appeared on Fox News and in Time magazine. He recently relocated from North San Diego County in California to East Tennessee with his wife, Sharon, and their youngest son, Joel.

Scott Klusendorf is president of Life Training Institute and the author of The Case for Life: Equipping Christians to Engage the Culture. Scott has taught pro-life apologetics at the graduate level at Biola University and Trinity Law School, and lectured at over 80 colleges and universities including Stanford, Berkeley, UCLA, USC, Johns Hopkins, MIT and the U.S. Air Force Academy.