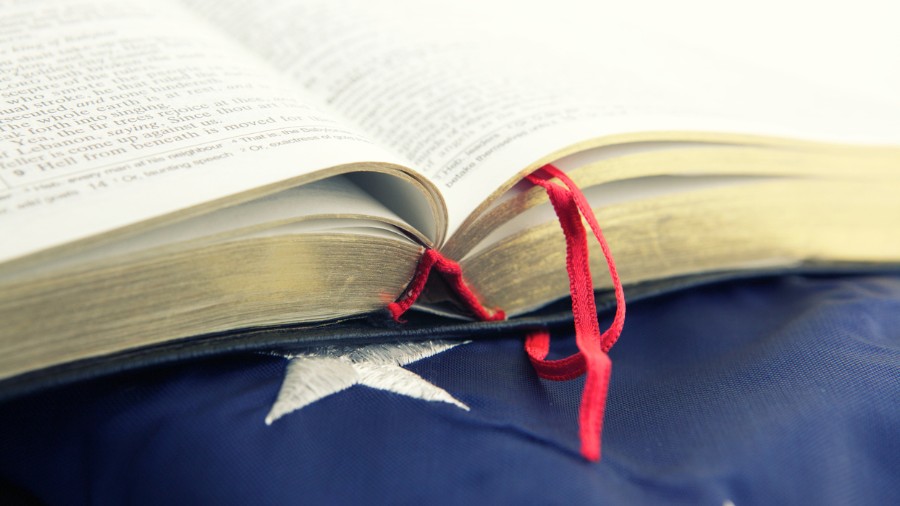 Perhaps it is my background as a Jewish believer in Jesus. Perhaps it is my calling as a preacher of the gospel first and a cultural-political commentator second. Either way, until Jesus returns and sets up His kingdom here on the earth, I will reject any semblance of a Christian theocracy. That includes Christian nationalism.

To be sure, some of my conservative colleagues want to embrace a positive use of the term, as in, “I’m a Christian who is committed to the wellbeing of my nation. That makes me a Christian nationalist.”

But is that how others will understand our words, unless we qualify the meaning every time? In that case, why not simply find a better term?

These conservative colleagues are certainly right to critique those who claim that, for Christian followers of Trump, Christian nationalism is the religion of white supremacy.

I, too, have rejected that equation, making clear that for the vast majority of white, Christian conservative, Trump supporters, our vote for him was not a vote to preserve a white America. (Most recently, see here.)

Promoting Patriotism is Not the Same as Promoting the Gospel

Yet to the extent that the gospel is merged with patriotism and loyalty to Jesus is conflated with support for America, we are in error.

In a previous article I explained that, in my understanding, you were not a Christian nationalist simply because you were a follower of Jesus and you loved and appreciated America. Or because you were patriotic and served in the military. Or because you believed Trump was better for America than Biden. Or because you felt that God raised up America for special purposes in order to bless and help the world.

But you were a Christian nationalist if you confused loyalty to your country with loyalty to the kingdom of God. Or you wrapped the gospel in an American flag. Or you ‘merge[d] Christian and American identities.’”

Is this just a matter of semantics, then? Perhaps for some it is. But, since the term “Christian nationalism” is already fraught with so much baggage and can be so easily misunderstood, why not simply identify as a “Jesus-loving American”?

There goes the baggage and there goes the confusion, even when it comes to what “Christian” means. (After all, roughly 75 percent of Americans identify as Christian, which is obviously far from reality.)

The Prophets Didn’t Necessarily Give a Patriotic Message

As for wanting to sound patriotic, let’s remember that in the Bible, the prophets were sometimes accused of being anti-patriotic.

That’s because, rather than joining with the nationalistic prophets, they spoke of impending judgment unless repentance came first. On some occasions, they even told the Israelite kings to submit to foreign leaders, since God was chastising the nation. What could seem less patriotic than that? Yet it was because they truly loved their country that they felt the need to speak.

It is the same with many of us today who strongly reject the language of Christian nationalism. Our love for God and country, which moves us to speak unpopular words, can be misconstrued as a lack of patriotism. So be it.

In the same way, when the prophets renounced idolatry in any form, they were not applauded by their idolatrous nation. Yet it was zeal for God and love for their nation that drove them.

It is that same zeal for God and love of country that moved some of us to speak up in the aftermath of the elections, as we saw a dangerous spike in Trumpism (meaning, an unhealthy looking to Trump as some kind of political messiah).

Did we do this to gain the approval of Never Trumpers or to appease a potential Biden administration? The suggestion is as laughable as it is ludicrous.

Speaking for myself, this reflected a position I have held to for decades in terms of Christians putting too much trust in a political leader. And it is a position I often addressed as a Trump supporter.

Don’t We have Room for Sober-Minded Reflection?

Perhaps there is room for some self-examination on the fervent pro-Trump side? Perhaps the concerns some of us are raising are not based on “squishy compromise” or a desire to find the “mushy middle” but rather on sober spiritual reflection? (For my relevant discussion with Pastor Shane Idleman, see here.)

I mentioned at the outset of this article my perspective as a preacher of the gospel first and a cultural-political commentator second.

As Peter wrote to the believers in his day, scattered throughout the Roman empire, “Dear friends, I warn you as ‘temporary residents and foreigners’ to keep away from worldly desires that wage war against your very souls. Be careful to live properly among your unbelieving neighbors. Then even if they accuse you of doing wrong, they will see your honorable behavior, and they will give honor to God when he judges the world” (1 Peter 2:11-12, NLT).

That is how we live in this world in whatever country we find ourselves.

To the extent we can bring about change from the bottom up, that change will be lasting. To the extent we try to impose it from the top down, it will be temporary, ultimately doing more harm than good.

Historically, Jews Have Not Fared Well Under Zealous Christian Rule

That’s one reason why many Jewish voters in America fear the religious Christian right, even irrationally. They wonder what would happen if Christian conservatives “took over” the nation. Which of our values would we impose?

Obviously, as followers of Jesus, we advocate for the life of the unborn and we support God’s definition of family, and we do what we can to change both hearts and laws.

But, others wonder, how far would we go? Would we also enforce penalties for not attending church or for working on Sunday, as some of the American colonies did?

Every man and woman duly, twice a day upon the first tolling of the bell, shall upon the working days repair unto the church to hear divine service upon pain of losing his or her day’s allowance for the first omission, for the second to be whipped, and for the third to be condemned to the galleys for six months. Likewise, no man or woman shall dare to violate or break the Sabbath by any gaming, public or private abroad or at home, but duly sanctify and observe the same, both himself and his family, by preparing themselves at home with private prayer that they may be the better fitted for the public, according to the commandments of God and the orders of our church. As also every man and woman shall repair in the morning to the divine service and sermons preached upon the Sabbath day in the afternoon to divine service and catechizing, upon pain for the first fault to lose their provision and allowance for the whole week following, for the second to lose the said allowance and also to be whipped, and for the third to suffer death.

Would we ban sports on Sunday? Would we bring out the whipping post for those who slept in on Sunday morning? Would we exempt Jews or Muslims or Hindus or atheists?

The Bible is the Answer

It for reasons like this that America, unlike some of the colonies, was not established as any kind of theocracy, although we had strong biblical roots. That’s also why someone like Thomas Jefferson, who was hardly an evangelical believer, could play such a major role in our early history. And that’s why one of the chapters in my 2017 book Saving a Sick America: A Prescription for Moral and Cultural Transformation was titled, “The Bible, Not a Theocracy, Is the Answer.”

So, while rejecting a theocratic kingdom in the here and now, we do our best to bring as many people as possible into the knowledge of God and the embrace of the Scriptures, seeking to influence our culture with these values as much as possible through every righteous means available.

But that is also why I will never be a Christian nationalist. America, just like the rest of the world, needs saving.

For me, this perspective represents the highest form of true patriotism and the greatest way I can serve my country as a Jesus-loving American.

So, if you’re looking for a fitting term, try that one on for size. Are there are any Jesus-loving Americans out there?