‘Why I Got Arrested Protesting the Lockdown’

An interview with Jason Scott Jones

He texted me right after posting bail. So I decided to interview him.

I saw that sweet pic of you getting arrested. What happened?

I’m in trouble with the lawless Governor of Hawaii and the Mayor of Honolulu. Or more accurately, I’m in trouble with distant, un-American, unelected bureaucrats. They’re working their will through Governor Ige and Mayor Caldwell. I was arrested on Friday for participating in the #ReOpen Hawaii event.

What did you observe about law enforcement at the re-open Hawaii protest? How were they acting? What were their orders, as far as you could tell?

Initially, I was relieved. It looked like we would have a short rally, express our grievances with the Mayor and Governor. And then head home for a barbecue with the family. About 30 minutes in, I noticed three separate groups of police officers. They began to move in from all three available directions in a standard cordon operation. This made my blood boil. I couldn’t believe our mayor would order police to use military tactics against the families of Hawaii.

An Attack on the Constitution

What do you object to about the lockdown orders in Hawaii? Are they unconstitutional, needless, or irrational?

Simply put: because they amount an illegal prior restraint on our right to free speech and our right to freedom of assembly. The order was unconstitutional, and it should not have been enforced. 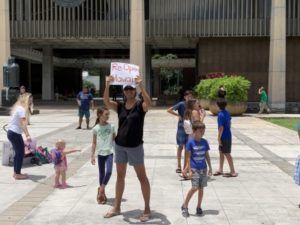 The Jones family at #ReOpen Hawaii.

What groups were involved in the protest? What about the efforts of Michigan’s Gretchen Whitmer to label such protests as “white supremacist?”

This is Hawaii; it’s hard to make that claim. A man arrested with me is a Samoan chief. I was there with my Chinese wife and hapa (Hawaiian for mixed) children. The event looked like Hawaii: Hawaiian, Samoan, Filipino, Chinese, Japanese. It was a good mix of our state — a lot of small business owners. I also saw a prominent pastor from Calvary Chapel Honolulu.

Do you see the actions of so many blue-state governors as ominous? Part of a real threat to liberty? Or just the fruit of panic and incompetence?

Regardless of motive or intention, the response by our governors is an ominous threat to liberty. Our state and local officials are behaving as thoughtless sock puppets. Distant, unelected bureaucrats are working their will through our governors and mayors. They give no thought to the local realities and needs of the communities impacted by Orwellian government overreach. It is vital in the preservation of liberty that we revitalize those institutions that shelter us from distant ideologues.

Do you see Americans as giving in to panic, and surrendering fundamental liberties based on weak or speculative evidence? Is this a trial run by enemies of liberty, to see how “Reichstag fire” panic can be weaponized to steal our rights?

We have surrendered our inherited freedoms without a fight. We will see if we will have to fight to regain them. Or if by the grace of God, men like DeBlasio and Cuomo surrender their totalitarian powers peacefully.

I couldn’t believe our mayor would order police to use military tactics against the families of Hawaii.

Are nursing home patients being kept safe in Hawaii? Or is your state forcing nursing homes to take in COVID patients, endangering the vulnerable, like New York, New Jersey and California?

Hawaii has a long, rich history of caring for the elderly. I have not heard news reports either way. It is unimaginable that the crimes against the elderly in New York and in Canada could happen in Hawaii. In fact, our commitment to the elderly and vulnerable leaves us open to easier manipulation by the dishonest media and victimist politicians

How are the homeless, who live on remote beaches in Hawaii, are being treated by the authorities?

The homeless problem in Hawaii is complex and unique. They could have left our homeless community unmolested. Instead the city and county of Honolulu have relocated thousands of them amid the crisis, several times. The relocation has made it more challenging for private nonprofits and church groups that serve them and meet their needs.

What’s your message to Americans in states with overreaching lockdown orders?

We must pressure our states to open up. The lockdown has catastrophic unintended consequences. The depressed are committing suicide. People are not getting necessary medical tests and treatment. There’s a real threat of hunger and famine in Africa, Asia, the Middle East, and South America.

What are your the next steps that you’re taking?

My next legal step is filing a complaint, a motion for a restraining order, and hopefully, a trial. I am filing against the governor, mayor, and the chief of police.

Blue Crush: How a One-Party State is Crushing the Little Guy