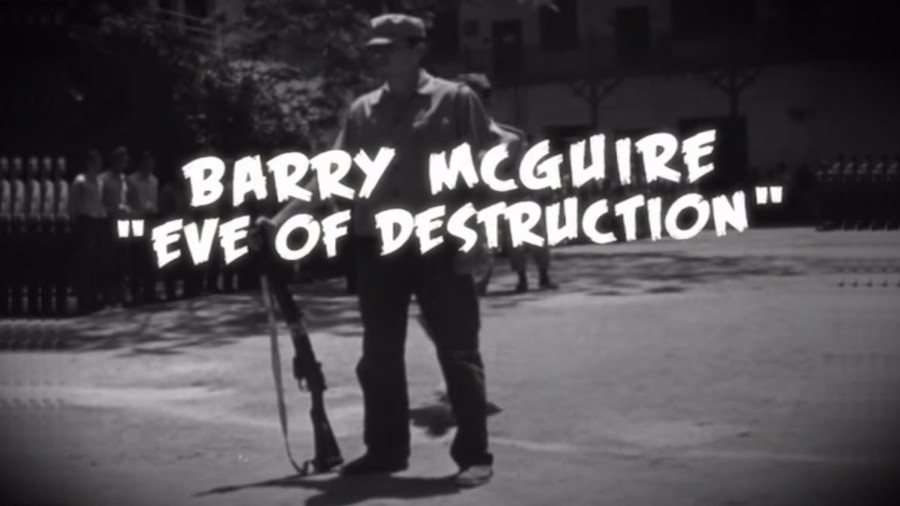 It was 1965 when Barry McGuire’s #1 hit song, “Eve of Destruction” was released, and I heard it as a 10-year-old boy. As I grew into my teens, I began to understand the lyrics, which expressed the frustration and hopelessness of the younger generation. We were old enough to be shipped off to Vietnam to die but not old enough to vote. And as the world was all ready to explode in a hail of nuclear bombs, there was nothing we could do. Worse still, no one would listen.

The lyrics pleaded. Don’t you understand? Can’t you see? Why won’t you believe that we are really on the eve of destruction? “This whole crazy world is just too frustratin’,” and neither Washington nor Civil Rights marches could fix it. Why, oh why, won’t anybody listen?

It was 19-year-old P. F. Sloan who wrote the song, and after it became famous, he explained to the Jewish Journal of Greater Los Angeles, “It’s an endless dance around this razor’s edge about what God is saying every time I sing this song. He’s telling me, ‘Don’t believe we’re on the eve, I’m not going to allow it.’ And then other times when I sing it, I get the message he’s going to allow destruction to happen. Every time I sing it, I get an insight into what’s going on.”

Even if you believe none of what I’m saying in terms of divine judgment, then believe this: We are absolutely destroying ourselves.

Fast forward now to the year 2020, and, once again, it feels as if we’re on the eve of destruction. But this time, it’s not because of the threat of nuclear war (although that is always possible). Nor is it because of global warming (despite the apocalyptic warnings of some). It’s not even because of the pandemic (although COVID-19 certainly has turned the world upside down).

Why are We on the Eve of Destruction This Time?

Instead, it is because, once again, we are destroying ourselves, especially here in America. We are on the verge of tearing apart at the seams. And, as I have warned in recent days, we stand on the precipice of a very dangerous cultural shift. Falling over this cliff, it will be almost impossible to find our way back.

A June 3, 2020 video of New York City filmed by Inside Edition was titled, “Luxury Stores Board Up Along Manhattan’s 5th Avenue.” The narration started with the words, “New York looks like a city under siege today.” (My appreciation to The Stream‘s John Zmirak for posting the video in his insightful article.)

This is a microcosm of our country: We are a nation under siege, and we are on the eve of self-destruction. It is an urgent time. It calls for an urgent response.

My guest on the Monday broadcast of the Line of Fire was New York Times #1 bestselling author Jonathan Cahn, talking about his newest book, The Harbinger II. We also spoke about the national (and global) repentance event he is organizing, The Return.

Jonathan spoke with great passion and deep concern as we discussed the state of the nation, not as an author trying to sell a book or promote an event. Rather, he spoke as a prophetic voice who has been warning for years that divine judgment is at the door. Yet neither the Church nor the society is getting the message. What will it take to wake us up?

Giving Us Over to Self Destruction?

I too have shared this deep burden, sometimes shaking on the inside when I consider the state of America. It seems certain that divine judgment is already in our midst, seen, at the very least by the evidence of withheld blessings. It also seems certain that He is giving us over to our own fleshly desires, barely holding us back from implosion. And it seems certain that His fiery judgment could soon be poured out.

Even if you believe none of what I’m saying in terms of divine judgment, then believe this: We are absolutely destroying ourselves. Is that not cause enough for deep concern? For alarm? For prayer and fasting and repenting?

I have shared recently how jarring it was to revise the text of my book Revolution!, first published in 2000 and now being released in updated form for October, 2020. The full, new title is: Revolution: An Urgent Call to a Holy Uprising, and every word of that title is meant seriously. Nothing less than a gospel-based, moral and cultural revolution will turn the tide, and the message and call are urgent. We must have a holy uprising!

Repeated Warnings to Wake Up

In the first edition of the book, in 2000, I wrote, “School shootings like Columbine could soon appear tame. Churches and synagogues could require metal detectors at the doors, just like airports and, tragically, so many of our schools.” That was before school massacres like Sandy Hook and Parkland and before the church and synagogue massacres in Sutherland Springs, Texas and Pittsburgh, Pennsylvania.

I wrote, “In the coming days, child pornography could grow even uglier and more rampant.” Need I share the horrifying online statistics here?

I added, “Our inner cities could become virtual war zones, while real family life could all but vanish from city streets. Trash talk TV shows could stoop even lower — who would have ever thought they could have stooped so low? — while those even daring to suggest the need for some kind of moral standards could be rejected out of hand as dangerous and extreme. What I am saying is not that outlandish!”

Yet few would listen back in 2000, and so I raise my voice again, as do Jonathan Cahn and a host of others, crying out, “Wake up America! Wake up Church! Turn to God before it’s too late.”

Jonathan told me during our interview that he and the organizers had been planning The Return event well before 2020, picking the exact date of September 26 last year. This means that the plan was put in place before the tumultuous events of this year of chaos and death.

The Sabbath of Repentance and Return

To Jonathan’s surprise, when he looked at the Jewish calendar, he realized that this day, which is a Saturday, is called Shabbat Shuvah, which means, the Sabbath of repentance/return. He knew that it was the Sabbath between Rosh Hashanah, the traditional Jewish New Year, and Yom Kippur, the Day of Atonement. And that’s why this day was picked. But he failed to realize the connection with “The Return” until the date was locked in.

One of the passages read in the synagogues on this sabbath is Joel 2:15-27, which calls for a solemn assembly, for fasting and prayer and repentance — with urgency.

This may be the only thing that will hold us back from the eve of destruction. May God have mercy!