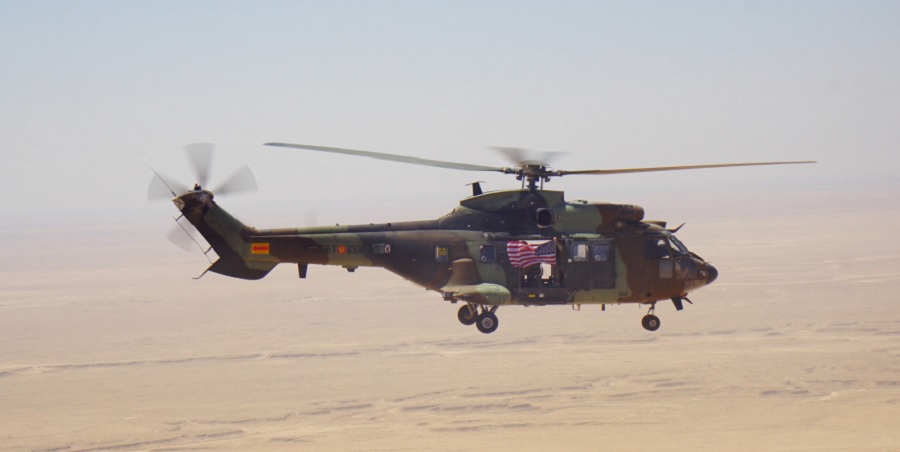 The American flag flies from a Spanish Army helicopter during a joint flight over Iraq on June 20, 2021.

American troops at war in Syria came under rocket fire on Monday.

Thankfully, there were no injuries when multiple rockets hit the Al-Omar Oil Field in Deir al-Zour Province, which is in eastern Syria.

U.S. forces returned fire, according to a military spokesman, with “counter-battery fire at rocket launching positions and one Hellfire” missile from an unmanned aerial vehicle that wounded one enemy fighter.

U.S. forces have the inherent right to self-defense and responded with counter-battery fire at rocket launching positions and one Hellfire from a UAV which resulted in one enemy wounded in action.

The attacks on U.S. troops took place “less than 24 hours after the U.S. launched airstrikes on facilities used by Iran-backed militias on the Iraq-Syria border,” according to the Military Times.

As you’ve been reading about on The Stream, American service members stationed in Syria and Iraq have been coming under fire for months from rockets and drones. As another military spokesman told the Military Times, Iran is believed to be behind much of the violence.

“Through these and other means, we seek to make clear to Iran and Iran-backed militia groups that there will be serious consequences if they continue to attack, or to arm, fund, and train militia groups that attack our people,” U.S. Navy Cmdr. Jessica McNulty said.

Please pray for all American troops at war in the Middle East, as well as thousands of military families who will be missing and worrying about their loved ones on this Fourth of July holiday weekend.

All U.S. troops have left Bagram Airfield in Afghanistan, according to Stars and Stripes. The American withdrawal from what was the largest military installation in Afghanistan for the past 20 years “marks a symbolic end to America’s longest war.”

As the Afghanistan conflict reaches its final chapter, the commanding U.S. general there told ABC News’ Martha Raddatz that security conditions are “not good.” He also said the Taliban trying to capture large areas of land could lead to a civil war.

“If you go back to what the Taliban’s objectives are, they want to take over and so at some point that implies that at some point they are in Kabul,” Gen. Scott Miller told ABC. “And certainly some of them remember what it was like the last time under with the Taliban regime.”

By “the last time,” Gen. Miller means before the 9/11 attacks, the 20th anniversary of which has been set by President Joe Biden as the conflict’s end date. After September 11, 2021, “there will not be a physical U.S. military presence in Afghanistan aside from the hundreds of personnel who will be stationed at the U.S. embassy in Kabul,” according to ABC.

.@ABC NEWS EXCLUSIVE: Will the Taliban take over when U.S. troops leave? @MarthaRaddatz takes us inside the Afghanistan withdrawal. https://t.co/vHhJY0Jx88 pic.twitter.com/WStP6wb8lG

Another huge concern as the remaining 2,500 American troops withdraw is the fate of Afghan interpreters, which The Stream has been extensively covering. While the U.S. government plan announced last week was a positive step, a bipartisan group of U.S. lawmakers passed a bill on Tuesday to speed up the process.

“About 18,000 Afghans who worked with U.S. troops as interpreters, translators or in other positions are eligible for a special immigrant visa to leave the country for their safety,” CBS News reported. “This number does not account for the family members who would also be included.”

With the Taliban and al Qaeda trying to hunt down these Afghan patriots, please pray for the interpreters, their loved ones and the brave American troops shielding them from almost certain death.

The first U.S. Secretary of Defense to preside over the Afghanistan and Iraq wars was Donald Rumsfeld, who passed away on Wednesday at the age of 88. Rumsfeld served as Defense Secretary from 2001 to 2006 under President George W. Bush and from 1975 to 1977 under President Gerald Ford.

I met Secretary Rumsfeld in 2010 at a Robert Novak Journalism Fellowship event held at the National Press Club in Washington. That night, I had the opportunity to give a speech in front of Rumsfeld and other longtime public servants about the importance of honoring the fallen and supporting our military community.

As soon as my remarks concluded, Rumsfeld smiled, took my hand and said “God bless you.”

I had the honor of meeting Donald Rumsfeld at a 2010 @NovakFellows @TFASorg event. I'll always appreciate @RumsfeldOffice's subsequent support of my work to honor our nation's military heroes. My deepest condolences to Secretary Rumsfeld's family. #RIP pic.twitter.com/ZE8gh4DQpV

From that night forward, Rumsfeld began supporting my military storytelling efforts and heaping praise on my first three books. He was also kind enough to send me a gracious letter of encouragement in 2016. Knowing that a public figure of Rumsfeld’s stature was reading and supporting my work meant so much to me, especially at the beginning of my writing career.

Like any government official forced to make tough decisions during a time of war, Donald Rumsfeld’s role in the Iraq and Afghanistan conflicts will be vigorously scrutinized and debated by historians. All I can say is that when I looked into the Secretary’s eyes, I saw a good man who wanted to do everything he could in his retirement years to honor and help the military community he once oversaw. I hope that important part of Rumsfeld’s legacy will also be remembered.

Please pray for the Rumsfeld family during this difficult time of mourning and grief.

Just in time for the Fourth of July, a large group of U.S. Army soldiers is back home after spending the past nine months deployed to South Korea. 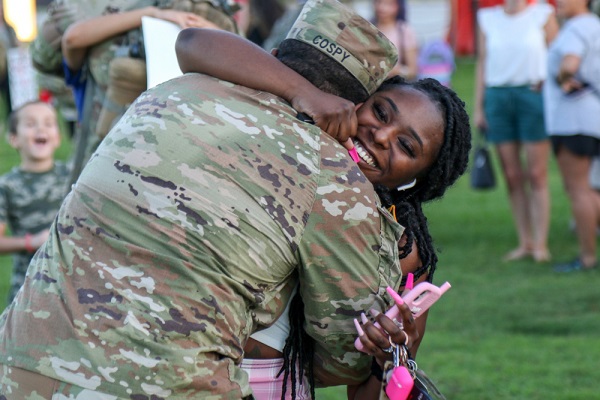 A U.S. Army soldier embraces his wife upon returning to Fort Stewart in Georgia from South Korea on June 27, 2021.

Welcome home, warriors! Thank you for spending so much time away from your families to defend our freedom.