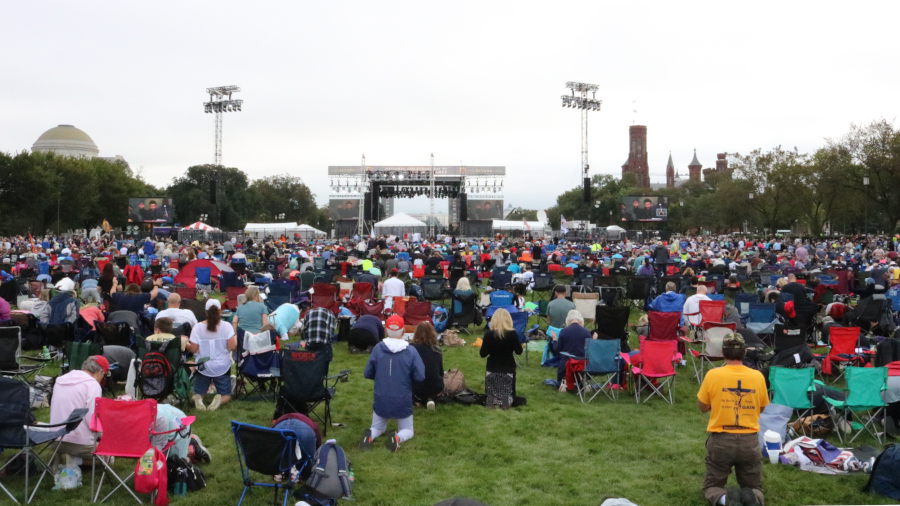 By Aliya Kuykendall Published on October 2, 2020 •

The blast of a shofar echoed on the National Mall Saturday morning. The blowing of the ram’s horn trumpet marked the opening of the main day of The Return, a gathering of thousands of Christians in D.C. and online for the purpose of repenting before God.

This gathering, on Friday night and all day Saturday, coincided with another major Christian gathering on the Mall with the same theme of concern and prayer for the nation. The Prayer March 2020 with Franklin Graham brought up to 50,000 attendees, event organizers told NBC Washington.

Jonathan Cahn, a Messianic Jewish rabbi and pastor, known for his book The Harbinger, and a leader of The Return, said this was “a prophetic moment,” “a prophetic gathering,” and a “sacred assembly.”

Christian leaders spoke throughout the day, calling the Church to the ways of God. At the keynote moment, Cahn delivered a prophetic word to America and the world. A main theme of his message is that America, like ancient Israel before the exile, is on a path towards judgement unless the nation turns back to God.

Based on information in his books The Harbinger and The Harbinger II, Cahn highlighted ways in which specific aspects of 9/11 and 2020 relate to harbingers that God sent ancient Israel prior to the exile. They warn of coming judgement, and give warning to repent. He said this is a critical time of grace to return to God before God removes His blessing on America. 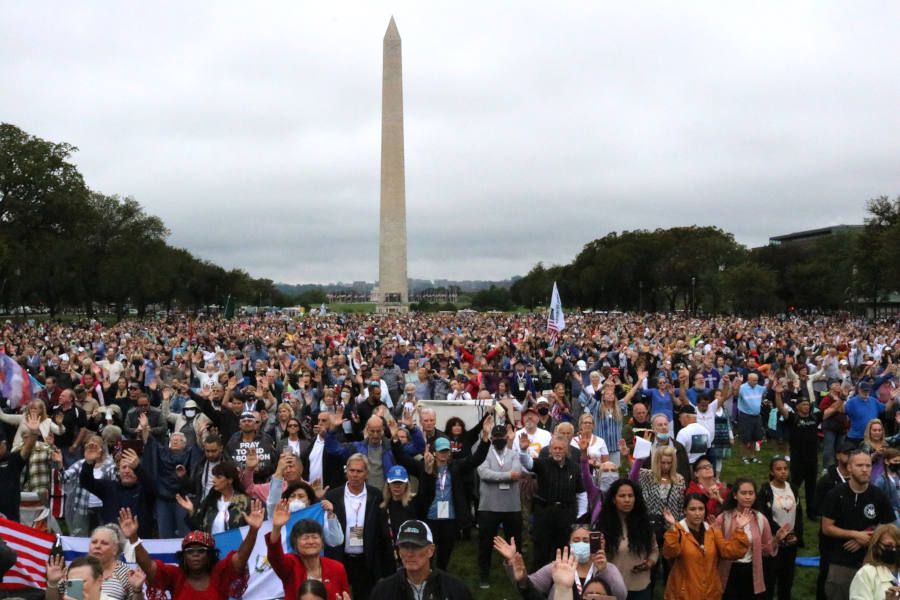 Thousands gathered on the National Mall for The Return raise their hands to receive the Biblical Aaronic Blessing, given by Jonathan Cahn at the start of the event.

Cahn referenced a 1630 speech by John Winthrop, a Puritan leader, called “A City on a Hill.” Winthrop warned his fellow settlers as they sailed to New England, “But if our hearts shall turn away, so that we will not obey, but shall be seduced, and worship other Gods, our pleasure and profits, and serve them; it is propounded unto us this day, we shall surely perish out of the good land [to which] we pass over this vast sea to possess it.” Cahn also quoted these words from George Washington’s 1789 first inaugural address, which President Trump, in his “Presidential Message on the National Day of Prayer and Return,” also quoted: “The propitious smiles of heaven can never be expected on a nation that disregards the eternal rules of order and right, which heaven itself has ordained.”

Cahn called out the nation’s sins of murdering millions of children in the womb, redefining marriage and performing surgeries on children’s bodies to change their nature. He also called on the Church to repent for complacency and for trusting in comfort and wealth.

In comparing America to ancient Israel, Cahn said, “We too, have turned away from the God of our foundation.” He added, “As we drove Him out, we opened up a vacuum into which came a flood of other gods. We would not call them gods but gods they were. Gods of prosperity and comfort and desire and carnality and sexual immorality and self-obsession.”

In a climactic moment, Cahn held up a clay pot, and, telling the Bible story of how the prophet Jeremiah held up a clay pot to ancient Israel and then smashed it, Cahn did the same on the stage. The smashing of the pot represented God’s imminent judgement on the nation.

Shabbatt Shuvah: The Annual Sabbath of Returning “Destined to be the Day of The Return”

Cahn said that when his team chose Sept. 26 for The Return, no one realized the day was already set apart on the Biblical Hebrew calendar as a special day of repentance. The Saturday is known as Shabbat Shuvah. It’s the Sabbath between two holidays from the Hebrew Bible: Rosh Hashanah, also known as the Feast of Trumpets, and Yom Kippur, also known as the Day of Atonement. Shuvah means< “return” in Hebrew, and this Sabbath emphasizes repentance and returning to God. Cahn said that in synagogues around the world, Joel 2:15 would be one of the scriptures designated to read on that day, which says, “Blow the trumpet in Zion, declare a holy fast, call a sacred assembly.”

“It was all the hand of God,” Cahn said. “All this was appointed in the eternal purpose of God before any of us were born. This day was destined to be the day of The Return and we each were destined to be here.” 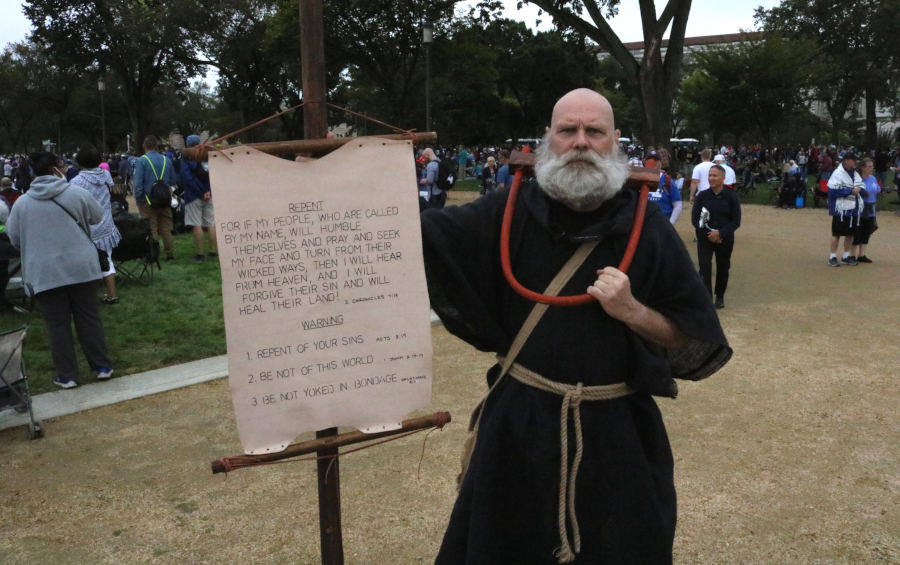 A man who called himself Brother Tom attended The Return and walked around in a garment made of sackcloth, a yoke around his neck and a sign in his hand. He stopped to let people read his sign, which said, “Repent” and featured 2 Chronicles 7:14 and three warnings: “1. Repent of your sins. 2. Be not of this world. 3. Be not yoked in bondage.” Brother Tom, who later identified himself as Tom Morrow, told The Stream that he is a missionary at Terra Nova Children’s Home in Zambia, but said he was living like the world: spending all his spare time watching Netflix and playing video games. He said that when he saw a video advertisement for The Return this summer, he felt convicted and wept for three hours. He stopped watching Netflix and playing video games and found that he had a lot more time to spend with God. He felt God tell him to travel from Zambia to D.C. to come to The Return. He said he believed God wanted him to shave his head and wear sackcloth, both Biblical signs of mourning, and carry the yoke and the sign as a representation to himself and others of what God was doing in his own life.

Cahn felt called to kneel and those gathered knelt as well.

“Father, we repent, and we repent on behalf of America,” Cahn prayed. “We commit to repentance and revival. We commit to be walking and living as never before for You in revival, in the power of the Spirit.”

At the same time as the thousands gathered for The Return were kneeling, just over a mile away, tens of thousands were gathering at the Lincoln Memorial to start the Prayer March 2020 with Franklin Graham. The prayer march marked one of the largest gatherings D.C. has seen since the pandemic, NBC Washington reported.

Lockett: “We’re really in a prophetic moment of decision.”

Matt Lockett, executive director of Justice House of Prayer D.C. and co-author of The Dream King, attended The Return. He said he was aware of several large Christian gatherings that had been planned for 2020 and then canceled, and The Return was the first one he was aware of that has stayed on schedule. Lockett recognized a need to balance the danger of meeting during a pandemic with the spiritual crisis our nation is experiencing. “The danger of us not doing this could far outweigh the danger of COVID-19,” Lockett said.

“We’ve wanted change, but we haven’t wanted to repent,” Lockett said. “Somebody has to win a spiritual battle so someone on the ground can be successful. A lot of times we try to win a ground battle and not think about the spiritual.” Lockett said that The Return would lead to progress “on the ground.” “I have faith that there are movements that will spread from here.” 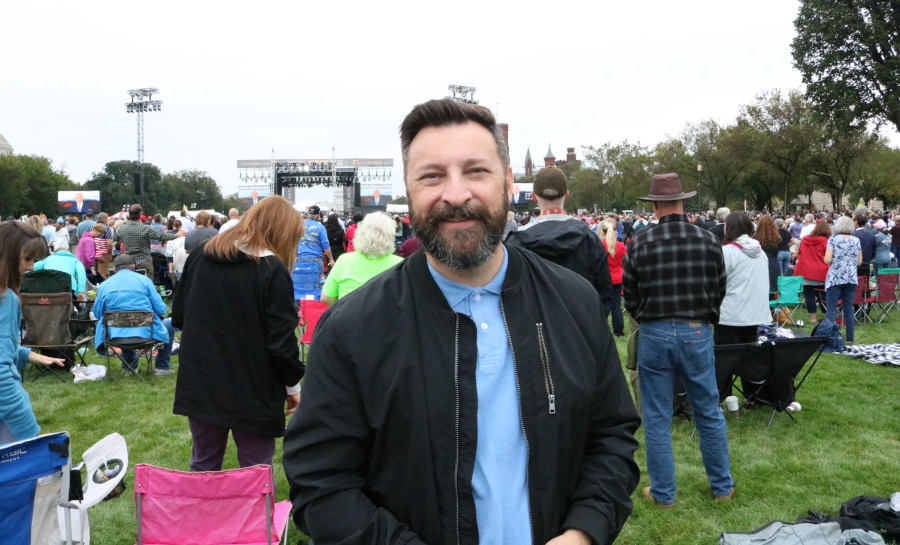 Lockett said the moment that struck him hardest was the smashing of the clay pot.

“I know the Jeremiah storyline, so I was a little expectant, but when he lifted the pot over his head and threw it to the ground and shattered it like Jeremiah once did, I don’t know what everyone else was feeling, but you could feel it, and there were people weeping. I’m weeping just thinking about it again,” he said, his voice shaking. “Because the gravity of the moment right now, words — words can’t really express.”

“Seeing the pot shatter, and feeling what I felt in that moment, it just, in my own heart, I feel the weight of the moment that we’re in in America, that this isn’t just another crisis, this isn’t just another day, this isn’t just another year. We’re really in a prophetic moment of decision. And so I feel the weight of the sin on the land. And we need to feel the weight of it, because we dismiss it and we excuse it and we just go about our business and we hope that it’s going to be different tomorrow, but it’s not. And so I’m believing that if we respond like we’re responding right now, that maybe the pot doesn’t have to break,” Lockett said, his voice shaking again. “In so many ways, things are breaking all across America, but I believe — I believe that it doesn’t have to shatter completely. There could be a great salvation that could break out, because we haven’t hit the end of the story line yet.

Watch a replay of the The Return live stream here. Cahn’s keynote message, “Word to America,” starts around the 2-hour mark: