President Trump Sends Message to The Return, Declaring the Inaugural ‘National Day of Prayer and Return’ 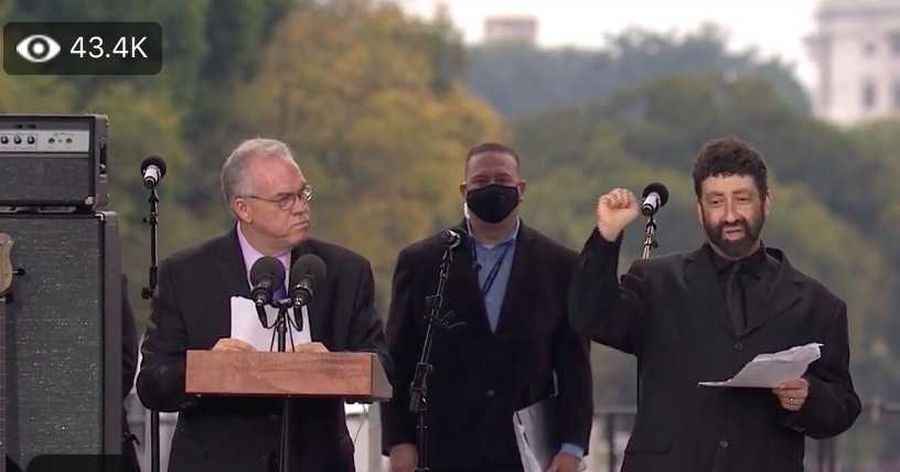 Jonathan Cahn reads a message from President Trump at The Return, on the National Mall, September 26, 2020.

President Donald Trump sent a message to the tens of thousands gathered on the National Mall Saturday for The Return prayer and revival event. This is the message:

On this inaugural National Day of Prayer and Return, the First Lady and I join millions of Christians here in the United States and around the world in prayer, as we turn our hearts to our Lord and Savior.

Our great Nation was founded by men and women of deep and abiding faith — a faith that has stood the test of time.  Four hundred years ago, early American settlers trusted their lives to His providence and braved a voyage to a New World.  From the pilgrims who sought His protection aboard the Mayflower to the countless believers who today bow their heads to ask for His guidance during these unprecedented times, our country continues to turn to the Lord.  Following in our ancestors’ footsteps we continue the “firm reliance on the protection of Divine Providence” that provides us enduring strength and reassurance in our times of need.

The trials and tribulations the American people have faced over the past several months have been great.  Yet, as we have seen time and again, the resolve of our citizenry—fortified by our faith in God—has guided us through these hardships and helped to unite us as one Nation under God.  As we continue to combat the challenges ahead of us, we must remember the sage words of President George Washington during his first Presidential Address: “propitious smiles of heaven can never be expected on a nation that disregards the eternal rules of order and right, which Heaven itself has ordained.”  As a country and a people, let us renew our commitment to these abiding and timeless principles.

Today, I am pleased to join my voice to yours in thanking God for blessing this nation with great power and responsibility.  With reverence, humility, and thanksgiving, we beg for His continued guidance and protection.

Note: The Stream’s Aliya Kuykendall was at The Return and reported on the event: Thousands Kneel on National Mall in Repentance to God at ‘The Return’ While Tens of Thousands Gather Nearby for Prayer March.