This Week at War: A Final Prayer

The Stream's weekly look at the ongoing sacrifices of U.S. troops and military families serving around the world. 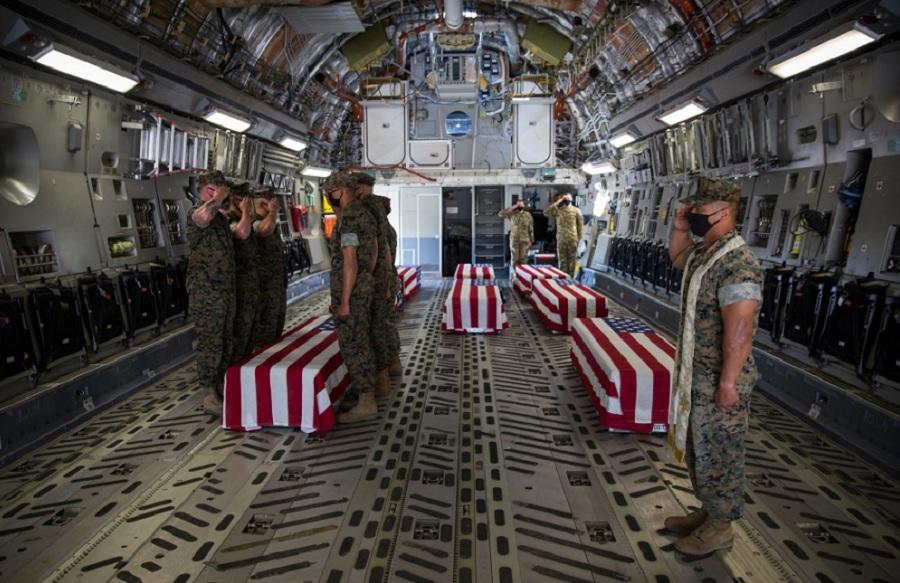 American troops are still at war. The powerful image displayed above, however, was taken this week on American soil. It shows fellow U.S. Marines and U.S. Navy sailors saluting the flag-draped caskets of fallen heroes killed in a July 30 training accident off the California coast.

Last week, we learned about the lives of all nine young patriots while also praying for their loved ones. While those prayers are ongoing, The Stream also pauses to recognize another important source of comfort and hope: America’s military chaplains.

As Stars and Stripes noted, “chaplains have been present during each step from search and rescue to recovery.” Before the U.S. Air Force C-17 took off from Southern California en route for Dover, Delaware, “a Navy chaplain aboard the plane said a final prayer.”

Once the flag-draped caskets of seven Marines and a sailor were on the C-17, a @USNavy chaplain aboard the plane said a final prayer. https://t.co/dkA7L6fZpX

Having spoken with more than a hundred families of the fallen over the past decade, I can tell you how valuable the spiritual counsel provided by these trusted chaplains is for many Gold Star family members. In several cases, the chaplains have stayed in close contact with these grieving military families many years after the loss of their loved ones.

Thank you to the chaplains of our nation’s Armed Forces for always being there for our military community, especially in this time of tragedy, disease and war. We join you in praying for the families of these nine fallen heroes and the entire Gold Star community, as well as all our troops, veterans and their loved ones.

In Bahrain, a U.S. Marine who died in a non-combat incident has been identified as Sgt. Trevor Goldyn, according to the Marine Corps Times. Little is known about the circumstances of his death other than that is under investigation. Please say a prayer for Sgt. Goldyn’s family, friends and fellow Marines.

In Lebanon, the U.S. military has been busy delivering desperately needed aid and supplies to Beirut after last week’s massive explosions devastated the city.

“In the wake of tragedy, it truly takes a combined effort to make the mission happen,” U.S. Air Force Brig. Gen. Daniel Tulley said. “We do this every day in Qatar, and that’s exactly what we are doing in support of the Lebanese Armed Forces.”

In Syria, where approximately 500 U.S. troops are still battling the remnants of ISIS, the commanding general of U.S. Central Command said the world must deal with another ticking time bomb: captured ISIS fighters. General Kenneth “Frank” McKenzie is particularly concerned about the al-Hol camp in northeastern Syria, where he’s monitoring increased radicalization amid poor conditions and COVID-19 spreading among ISIS prisoners and refugees.

“I don’t have an answer besides repatriation,” said Gen. McKenzie, as quoted by Voice of America. “We either deal with this problem now or deal with it exponentially worse a few years down the road.”

From Syria and Iraq to Afghanistan and other hotspots around the world, our brave troops face danger every single day. Please pray for these warriors and their families.

On Wednesday, The Stream brought you breaking news about a troubling incident in Northern Virginia, where a U.S. Air Force helicopter was shot at from the ground. One crew member who was injured has since been released from the hospital.

As of Thursday afternoon, there were no updates on the investigation other than the FBI continuing to seek help from the public. Anyone with information on this apparent attack against our military is being asked to call the bureau at (202) 278-2000.

Amid a pandemic and a presidential campaign, these important anniversaries are not getting the widespread attention one might expect. Yet as I wrote on V-E Day back in May, “more present day Americans must emulate those who earned the right to celebrate 75 years ago today. V-E Day didn’t happen by accident; it was the culmination of years of unity, shared sacrifice, bravery and a collective belief that eventually, God would shine a path for our nation and world to triumph over evil.”

Thank you to all World War II veterans, living and departed, who came together to save the world. America will forever be grateful for your historic victory and shared sacrifice.