Honoring the 9 American heroes who lost their lives in a tragic training accident off the Southern California coast. 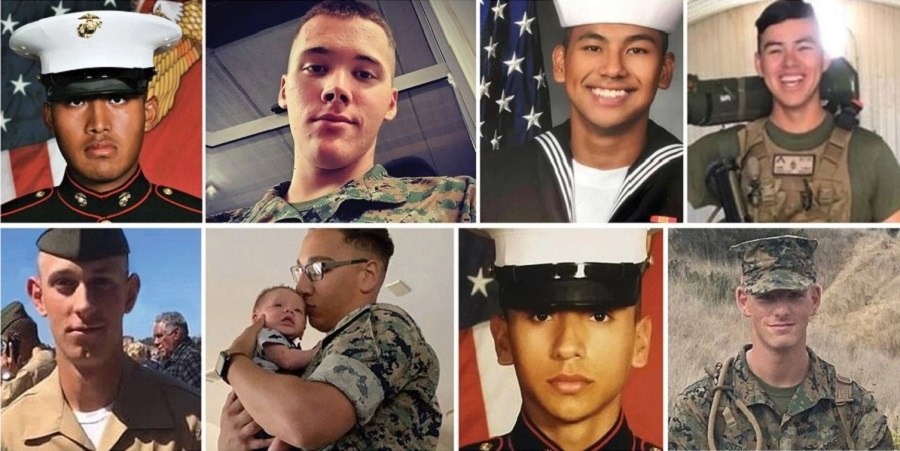 Eight U.S. Marines and one U.S. Navy sailor were tragically killed in a July 30 amphibious assault vehicle accident off the Southern California coast. As their remains are solemnly recovered near San Clemente Island, The Stream‘s This Week at War feature pauses to pray for all nine families of the fallen while honoring each of these young American heroes.

“He was truly an amazing person who impacted a lot of lives,” fellow U.S. Marine David Latigo told News 4 San Antonio about his friend.

Lance Cpl. Guillermo Perez is being remembered not only for his service to our country, but his “infectious smile.”

“He was honestly sent to earth to make people laugh,” Latigo told the TV station. “He was always in good spirits no matter what was going on.”

Please pray for Perez’s loved ones, friends and fellow Marines.

One year after enlisting in the Marine Corps as a teenager, Pfc. Bryan Baltierra made the ultimate sacrifice for his country.

“My one and only son, who radiated positivity and expressed his wonderful smile to everyone he met,” the fallen Marine’s mother said in a statement relayed by CBS Los Angeles.

The TV station reported that the departed warrior is survived by his parents and three sisters, all of whom we are praying for.

“I’m so proud of you, you are the best son I could ask for,” Lupita Garcia said to her son, Lance Cpl. Marco Barranco, known to those around him as Andy. “My heart goes out to all those families because it’s not just my son.”

CBS L.A. reported that Lance Cpl. Barranco “was inspired to serve his country because of the opportunities it gave his immigrant parents and family.”

“He wanted to be part of this great nation and he wanted to protect it and I know he would do it again,” the fallen hero’s mother told the station.

In addition to his parents, Barranco reportedly leaves behind two sisters. We ask God to comfort them.

Less than a week before making the ultimate sacrifice, Pfc. Evan Bath took a break from training to call his mom.

“He found a doorway in the ship that he found a little bit of signal, and he called me,” Aleta Bath told FOX 6 Now Milwaukee. “He said he was really happy, so I knew that. It made me happy.”

The young Marine was reportedly an active member of Lifepoint Church in Mukwonago, Wisconsin. We join Lifepoint’s congregation in praying for this faithful warrior’s parents, stepmom and stepsisters.

Future U.S. Navy Hospitalman Christopher “Bobby” Gnem was nowhere near the best player on his high school basketball team, but was nevertheless voted its captain.

“That shows how much respect his teammates had for him,” Greeno told the TV station. “These are the kind of kids that just make a huge difference in the world.”

Indeed, the lone sailor to lose his life in the accident made a difference. We pray for this sailor’s parents and fiancée, who is also a U.S. service member, according to CBS Sacramento. Please ease their pain, Lord.

“I hope everyone is having a good Memorial Day and honoring those who couldn’t be here,” Pfc. Ostrovsky wrote. “God bless.”

May God also bless the family, friends and fellow Marines of a warrior who honored fallen war heroes by the way he lived and died. This proud patriot embodied all that is noble about our nation.

“You know, some people have the angel and the devil on their shoulder,” Niki Stockdale, aunt of Lance Cpl. Chase Sweetwood, told KUSI in San Diego, where the future Marine grew up. “He just always had that little angel on the side.”

The fallen Marine leaves behind his mother, Christiana Sweetwood, and three siblings. We are praying for them.

“His heart was so big and he just drew people to him,” Stockdale told the station. “I am so grateful for the life that he had.”

Corporal Wesley Rodd was just 23 years old, but was also the oldest U.S. service member that the Pentagon said was killed in the July 30 training accident. According to a GoFundMe page created in his honor, Cpl. Rodd was not only a husband, but a brand new father.

Our hearts ache for this fallen Marine’s wife, Jamie, and their precious little boy. We pray that Cpl. Rodd’s son will grow up with his dad’s enduring spirit always shining brightly in his heart.

“On behalf of the City Council and entire City of Riverside, I would like to express our heartfelt gratitude for Cpl. Villanueva’s services to our country and the service of all men and women in our military,” Riverside Mayor Rusty Bailey posted on Facebook. “We will be working over the next few days to connect with the Villanueva family to offer support.”

“In the meantime, I hope that our entire community will join me in prayer for these families during this tragic time,” Mayor Bailey added.

The Stream, its readers and countless others across our nation will undoubtedly join in those prayers, including for five rescued Marines and two others who were hospitalized after the accident while training for war, according to Stars & Stripes.

We will never forget these nine American heroes. They were blessings to not only their loved ones, but the country they so proudly served.