A U.S. Air Force E-11A aircraft outfitted with a Battlefield Airborne Communications Node (BACN) sits on the runway at Kandahar Airfield in Afghanistan on April 4, 2019.

America has lost two more heroes during the war in Afghanistan.

SEAL Team Six recovers the bodies of two servicemembers after a plane crash in Afghanistan. pic.twitter.com/tyixxpRoF9

Earlier in the day, Fox News reported that SEAL Team Six recovered the remains of their fallen brothers while securing the crash site, which is in a dangerous war zone mostly controlled by the Taliban.

“The military is trying to find out why the surveillance plane crashed on Monday,” Fox reported. “At this point, there’s no evidence it was hit by enemy fire.”

Let us all join in prayer for the families, friends and fellow airmen of Lt. Col. Paul Voss and Capt. Ryan Phaneuf. As millions of Americans mourn the death of basketball star Kobe Bryant, hopefully we can also pause to honor fallen heroes who sacrificed everything to defend our liberty.

Imagine if every American who tweeted condolences for Kobe Bryant did the same for @usairforce Lt. Col. Paul Voss & Capt. Ryan Phaneuf, who were killed Monday in Afghanistan. Given Kobe's support for the military, it's probably what he would have wanted. #RIPKobeBryant #RIPHeroes

A North Carolina military family is mourning the loss of a young American hero in Syria.

According to the Department of Defense, U.S. Army Spc. Antonio Moore, 22, was killed on January 24 in Syria’s Deir ez Zor Province “during a rollover accident while conducting route clearing operations.” The military is investigating the circumstances of the tragedy.

He was a former football player and graduate of John T. Hoggard High School.

Specialist Moore, who was a high school football standout in his hometown of Wilmington, was on his first overseas deployment, according to the Washington Examiner. The fallen soldier leaves behind “his mother, stepfather, three brothers and one sister.”

Please keep this Gold Star family in your prayers as they mourn this terrible loss.

The number of American service members suffering from traumatic brain injury (TBI) following Iran’s recent missile attacks on military bases in Iraq has risen to 50, according to NBC News. As The Stream noted last week, the Pentagon previously reported that 34 U.S. service members were afflicted with TBI as a result of the assault on Al Asad Air Base.

“Of the 50 patients, 31 were treated in Iraq and have returned to duty, Army Lt. Col. Thomas Campbell, a spokesman for the Pentagon, said in a statement,” according to NBC.

We will be praying for these wounded warriors as they battle the long-term effects of Iran’s acts of war against our brave men and women in uniform.

A U.S. Air Force airman recently surprised his daughter by returning to Washington State from overseas to greet her at the finish line of a 5K race. 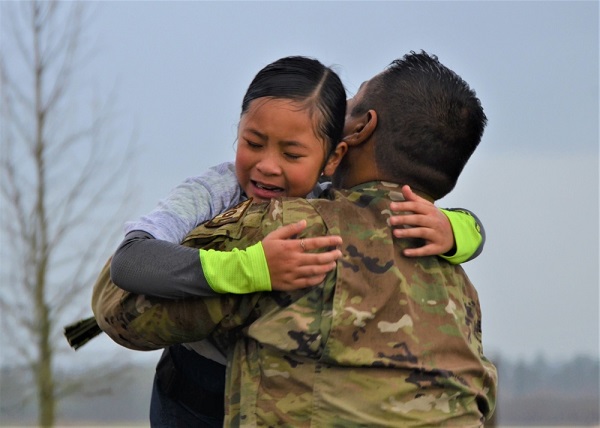 A U.S. Air Force airman hugs his daughter during a surprise homecoming on the finish line of a 5K race to commemorate the life and legacy of Dr. Martin Luther King Jr. at Joint Base Lewis-McChord in Washington State on January 24, 2020.

Welcome home, hero! Thank you for your service.

This Week at War: Support Our Troops