The Stream's weekly look at the sacrifices of U.S. troops and military families during the war in Afghanistan and other conflicts around the world. 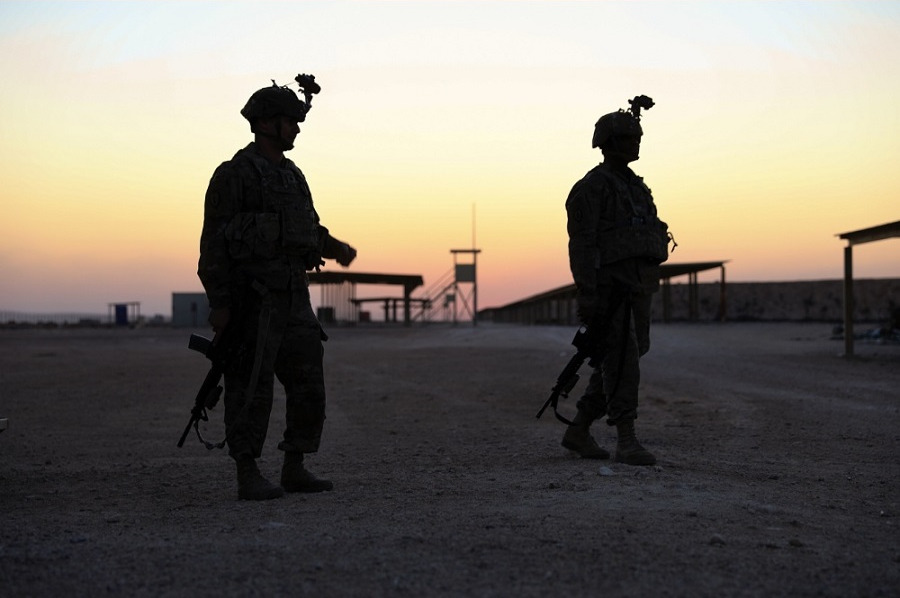 U.S. Army soldiers conduct a live-fire exercise at Al Asad Air Base in Iraq on February 5, 2020.

As media reports circulate about a “temporary truce” and possible peace deal with the Taliban to end the war in Afghanistan, two American military families are preparing to lay their loved ones to rest.

According to KSAT-TV, funeral services for Sgt. 1st Class Gutierrez will begin on Friday in San Antonio. The U.S. Army Green Beret warrior, who leaves behind a wife and four children, will be laid to rest on Saturday at Fort Sam Houston National Cemetery.

The fallen soldier’s father spoke to the TV station about getting to spend some precious time with his son in December.

“The Lord has a way of allowing us to say our goodbyes without us even knowing it,” the senior Javier Gutierrez said.

The second American hero killed in the attack, Sgt. 1st Class Rodriguez, was an Army Ranger who leaves behind his wife and parents. Funeral services for the elite soldier start Thursday evening in New Mexico, according to the Las Cruces Sun News, before a March 3 burial at Arlington National Cemetery.

“Rod’s character was unmatched,” the fallen Ranger’s obituary said. “There isn’t anything he wouldn’t do for his family, friends and strangers.”

Both of these proud patriots were just 28 years old. They were married with their whole lives ahead of them. Perhaps the most painful aspect of this tragedy is the four beautiful Gutierrez children who will now be forced to grow up without their father.

While I don’t normally cite the New York Times editorial page, I tend to agree with this op-ed raising serious questions about the purported peace deal with the Taliban. The Trump administration’s goal of ending the 18-plus year war is noble, but how can we trust terrorists to adhere to vague “temporary truces” and “reduction in violence” pledges?

One fact of the ongoing conflict is indisputable: America’s longest war – which has already claimed the lives of seven American service members so far this year – is not over. We must continue to pray for not only our troops in harm’s way, but their loved ones here at home and especially the Rodriguez and Gutierrez families.

There is an important reason we use the term “Gold Star families.” These grieving, yet incredibly strong Americans are national treasures. We ask God to wrap His arms around each and every one of them.

Not enough Americans realize it, but U.S. troops are still stationed in dangerous Middle Eastern war zones like Iraq, pictured above, as well as Syria. Earlier this week, the Pentagon released a dramatic video showing how American and coalition forces are staying prepared on one of the world’s most dangerous battlefields.

. @CJTFOIR conducted a live-fire base defense exercise with just some of our capabilities, at an outpost in northeast #Syria. #Mortars and vehicle-mounted #rockets rapidly destroyed the targets. The exercise proved we can #strike anywhere and anytime. @CENTCOM @OIRSPOX pic.twitter.com/Dkb3jZIldo

Please join me in praying for our nation’s brave protectors serving in the Middle East, and especially the more than 100 active duty troops suffering from symptoms of traumatic brain injury after January’s missile attacks by Iran. Our hearts are with you and your families as you fight to preserve our freedom.

A group of U.S. Air National Guard airmen recently returned to Salt Lake City after spending six months deployed to the Middle East. The joy in the below photograph speaks for itself. 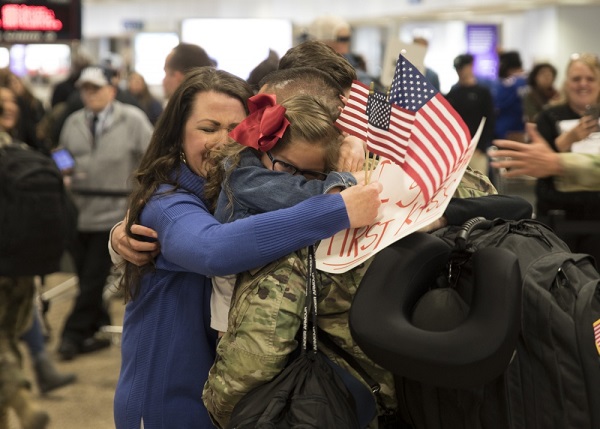 A U.S. Air National Guard airman is greeted by family and friends at Salt Lake International Airport on January 23, 2020.

Welcome home, heroes! Thank you for your service and God bless you.