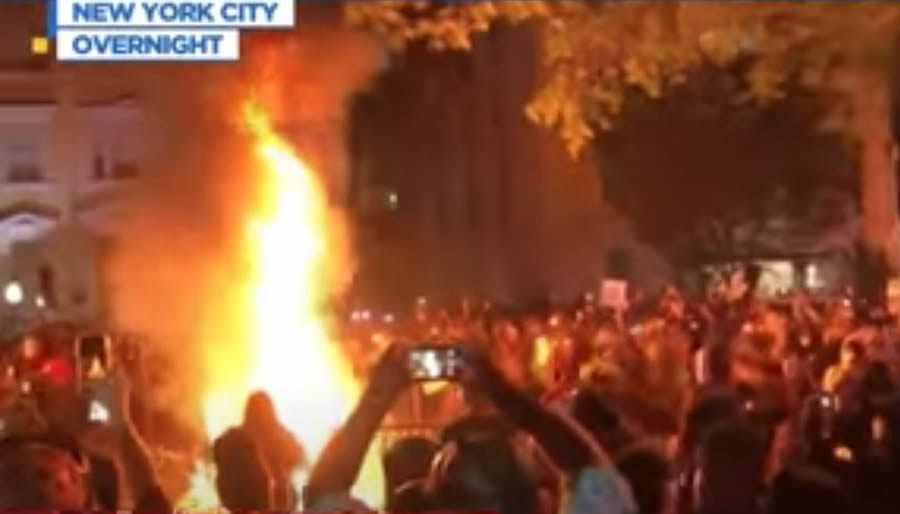 As Donald Trump scoffed through a silly, partisan show trial over the roots of the Capitol’s Reichstag Riot, Democrats and their plutocrat allies kept busy. They’re preparing to tighten the screws. They hate the old America, the traditional America, of rugged individualism and God-given rights and freedoms. How could they help it?

Their Woke, post-Christian worldview could not possibly be more opposed to the vision of man that built this country, freed the slaves, beat the Nazis, and wore down the Soviet empire. Instead of Christian humanism and a sane Christian nationalism, the left now favors nihilist globalism.

On the one hand, human life isn’t sacred, but a cosmic mistake favored by ruthless Darwinian competition. So it’s okay to kill babies, and old people, and the handicapped, as if they were unwanted shelter pets.

A Shiny Red Bow on a Big Box of Nihilism

But we can’t quite bear to face this black hole at the heart of our ethics. So we distract ourselves from it by inventing new rights and privileges for politically opportune groups arbitrarily marked as “victims.” The same Woke tech CEO who gets teary-eyed at the plight of white male transgender billionaires shrugs at the news that enslaved Uyghurs in China sweat to make the parts for his new smartphone.

Illegals who sneak into our country and commit felonies? They’re marked as “victims.” Americans who brandish their guns on their own front porch to scare off a mob? They’re treated as felons.

I wrote here a few weeks ago that I think the left get a rush of pleasure, not shame, when we try to confront them with their own crass double standards. The discrepancy just reminds them that they’re wielding the power. There’s a Jim Crow system in place, and they’re the ones holding the whip.

One Law for Me, Another for Thee

Already, men like California Governor Gavin Newsom expect to enjoy their own exemptions from the useless virus lockdowns they impose on the Proles. And of course, New York Governor Andrew Cuomo ensured that his own mother was safe in a mansion as he dumped thousands of COVID patients on helpless nursing home victims. I think if left to its own devices, within ten years or so, the left will in fact demand separate drinking fountains for Republicans and Christians.

They Say They Want a “Revolution.” Believe Them.

Rioters for Black Lives Matter and Antifa got released mostly without bail. Those who did face bail had Kamala Harris, no less, out helping them raise the scratch. Americans who resist the left, like Jake Gardner and Ashli Babbitt, can go off and die, like the maladapted primates the Democrats think they are.

And Democrat politicians can use the most violent rhetoric since the brink of the Civil War, and shrug off the consequences. But when Donald Trump uses similar (if less violent) talking points? Congress will revive medieval abuses like bills of attainder to kick him out of politics.

Do yourself a favor, and wake up to what we face. Sit down and watch the montage of unhinged, incendiary rhetoric that Donald Trump’s defense team compiled and showed to Congress. (Where, as The Epoch Times reported, Democrats sniggered and giggled, like sadistic schoolboys.)

Send this Cup of “Wake Up!” to Your Friends and Pastors

Make yourself some coffee, and drain this cup to the dregs. Then send it to any friends you still might have who backed this absurd impeachment. Demand that they explain and justify the prevailing double standard. If they come back at you with some gibberish like “Two wrongs don’t make a right,” don’t let that phase you. Ask them if it’s right, or fair, or in any sense American to hold two different parties to radically different legal standards.

These same Democrats now are preparing to gut the Second Amendment, the last restraint our founders put in place should all else fail, and our government turn into the kind of monster it’s becoming before our eyes. Joe “President” Biden has just promised the cash-rich, power-hungry gun control lobby that he will act on its most radical proposals.

The craziest one is HR 127, which “would require expensive psychological evaluations for multiple family members before being able to purchase a gun.” Keep in mind that the right of self-defense is a fundamental, God-given liberty. It stands in our Constitution at the same level as the rights of free speech, free assembly, and the free exercise of religion.

But then we’ve seen what a public health crisis like COVID can do to eviscerate those rights, haven’t we? Gun-grabbers use the same rhetoric about the invented “epidemic” of “gun violence.” Now they wish to make our right of self-defense conditional on some leftist psychiatrist’s opinion.

The Last Hill to Fight On

Remember one thing, if nothing else. Between 1914 and 1990, some 170 million helpless civilians were murdered by their governments around the world — not including casualties of war. The one trait those victims shared? Virtually all of them had been disarmed by governments.

If you think the left is a harmless, well-meaning band of idealists, go back and watch Kamala Harris just two months before the election endorsing the riots that killed 25 Americans.

Do you think the Democrats care about your freedom, your safety, your family’s right to live? Think again, long and hard.

And never turn in your guns, no matter what Congress says or whom they send to collect them. As the montage video showed, the Democrats love to talk about “fighting.” Well, this is the last hill to fight on.