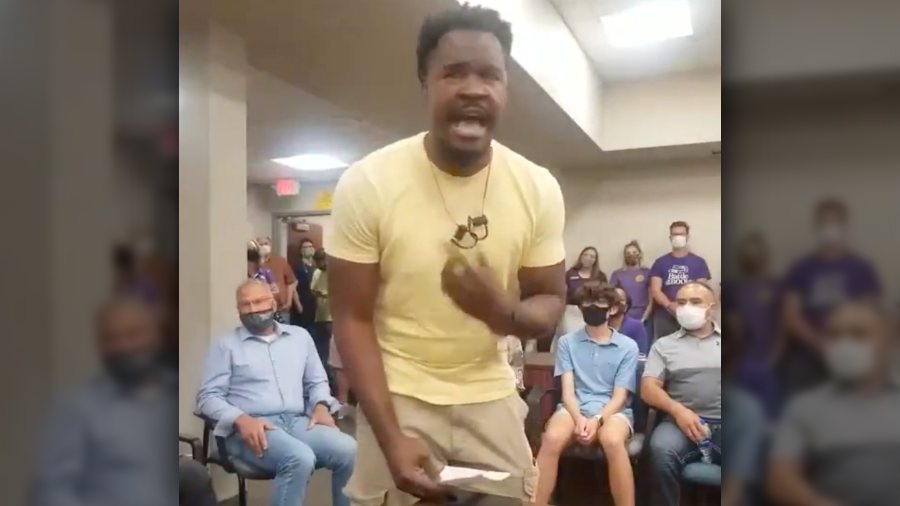 Parent and radio host Ty Smith speaking against CRT at a school board meeting in Illinois.

In America today, when it comes to the question of Critical Race Theory (CRT), we are like ships — really, like battleships — passing each other in the night. One side shouts, “We’ve got to get CRT out of our schools! It is hurting our children!” The other side responds, “CRT is not being taught in our children’s schools! This is just a racist dog whistle!” Is there any way to bridge the divide?

To illustrate the depth of our divisions, an August 2021 article posted on the Brookings.edu website stated, “Fox News has mentioned ‘critical race theory’ 1,300 times in less than four months. Why? Because critical race theory (CRT) has become a new boogie man for people unwilling to acknowledge our country’s racist history and how it impacts the present.”

That is quite a serious charge.

Is Fox really engaging in white supremacist fearmongering? Or are fair-minded parents across America genuinely concerned about a destructive educational agenda in their kids’ schools?

That’s why I said that, when it comes to CRT, we are like battleships passing each other in the night — and shooting at each other as we pass by.

How Do We Define CRT?

Yet I do believe that some of these divisions are more artificial than real, with the first problem being one of definitions. When we speak of CRT, are we speaking about the same thing? Can we even define it in our own words?

If we want to move beyond the current impasse, our first question should be, “What, exactly, do you mean by CRT? Can you define it?”

A colleague of mine asked me these same questions, writing to me from the perspective of a God-fearing, Bible-believing, highly respected black educator.

This led to a fruitful and insightful discussion, one through which we understood one another better and could better define where we agreed and disagreed.

But we can’t debate CRT if we can’t define it. So, let this be our starting point: What, exactly, do you mean by CRT?

This leads to the next: “Do you believe that CRT is being taught in our children’s schools (meaning, K-12)?”

My colleague assured me that, in his state (Virginia), CRT was not being taught in the schools. Instead, he explained, CRT was an academic theory taught at college or grad school levels.

But when I asked him if classes were being taught through the lens of CRT or if teachers were being informed by CRT, he said that was a very different question. Yet that was the very thing I meant when I referred to CRT being taught in our schools. Our interaction brought this difference to the surface.

An Explicitly and Implicitly Racist Approach to Education

It is the viewpoint of the black civil rights leader Bob Woodson that CRT is “explicitly and implicitly a racist approach to education,” and that approach is increasingly infiltrating our schools. That is what many parents are reacting to, and that’s why children’s education was such a hot topic in Virginia and beyond in the recent elections.

It was not a chimera or a racist dog whistle. It was (and is) an issue of real concern.

Britt Hume put it like this: “There’s ample evidence that critical race theory very much influences and is injected into what is being taught in those schools and these parents knew that.” That was the point I was making to my colleague, and that would be true even if many parents could not define CRT with precision.

Hume continued, “Now, you could say technically it is not being taught in the sense of volumes have been written on critical race theory and it’s not been handed out as a textbook” – which was the point my colleague was making to me – “but its influence and its tenants are in those schools.”

That, again, is the crux of the matter, and that’s what brings me to an approach that, hopefully, can help us work together for the betterment of our children, exposing bigoted and racists attitudes on all sides.

We continue to dig deeper with two sets of questions for parents.

If we can say yes to the first set of questions, that rebuts the idea that parents who oppose CRT don’t want their kids to know the truth about slavery and segregation (and more). To the contrary, these parents are saying, “Yes, let the whole story be told, but in a fair and accurate way.”

If we can say yes to the second set of questions, that rebuts the idea that proponents of CRT want white children to feel guilty or that they want to incorporate identity politics into the classroom. To the contrary, they are saying, “We have no desire to lay a guilt trip on white Americans.”

But at least this way, we can expose and confront bigotry and bias while working with others of like heart and mind to do our best to continue to move forward as a nation.

Can we at least give this a shot by putting these questions on the table? It’s sure better than fomenting more division and anger by yelling and accusing as we sail by each other’s ships in the dark of night.

Editor’s note: As Dr. Brown states above, CRT can be difficult to define. But for an excellent and clear definition gleaned from CRT proponents’ own words, see Tom Gilson’s article, Critical Race Theory: A Practical Ministry Explainer for Pastors, part of The Stream’s brand new Pastors’ Corner series.