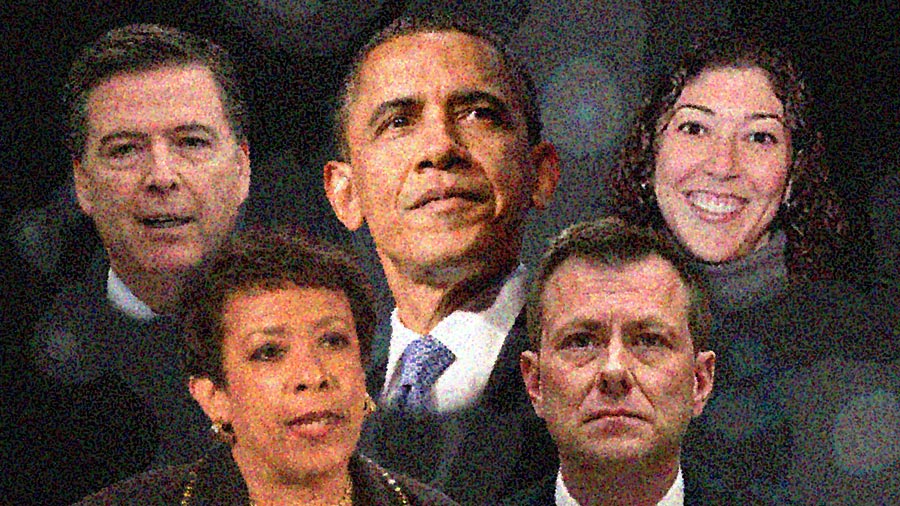 Friends, I have to issue a correction to my recent articles on Michael Flynn and Barack Obama. In the Obama article I chided Obama for saying, when condemning William Barr’s decision to drop the charges against Flynn, that nobody’s gotten away scot-free with “perjury.” Since Flynn had not been charged with perjury, I said Obama got the whole thing wrong.

Except I’m the one who got it wrong. Obama wasn’t making any mistake when he was talking about a perjury charge against Flynn. He was issuing a directive instead.

To refresh, here is what Obama told his former staffers Friday, in a call his people leaked to the media:

There is no precedent that anybody can find for someone who has been charged with perjury just getting off scot-free. That’s the kind of stuff where you begin to get worried that basic — not just institutional norms — but our basic understanding of rule of law is at risk.

Then yesterday, Flynn’s judge, Emmitt Sullivan, made an unbelievable, highly unusual and incredibly dubious move. He asked retired judge-turned-high-ticket-Swamp-lawyer John Gleeson to examine whether Flynn could be charged with perjury for wanting to change his plea. This is outrageous, dangerous and utterly bewildering.

Then again, not so bewildering in the wake of Obama’s statement.

The signal couldn’t have been clearer if Obama had hired a skywriter to swoop over the courthouse.

So Obama Speaks, So It Is Done

We’ve seen this Obama move before. Go back to April 2016, the height of the Clinton email investigation. Fox News asks Obama about it. He shrugs: Hillary’s private email server was no big deal. There’s classified, and then there’s classified. She “never would have intentionally harmed national security.” Intent is not part of the statute. Though she sure did harm national security. (In fact, it has since been discovered she exposed some information so classified, even the classification is classified.)

A couple weeks later, Trump secures the nomination. That same day FBI lawyer Lisa Page grumbles that this means there will be enormous pressure to close the Hillary investigation. From whom? We find out soon enough. Next day, according to White House logs, Page is at the White House for a meeting about the investigation. (Oh, but Obama’s White House doesn’t get involved in investigations, he assures us. Please read this Associated Press article about Obama’s interview. Weigh it against what we now know.)

Within hours of the White House meeting, The Washington Post reports that “U.S. officials close to the matter” have revealed Hillary likely won’t be charged since there’s no proof she intended to harm national security. Which is not the statute, not even true — but it is word-for-word what Obama had said.

The directive had gone out. The soldiers acted. And sure enough, the Hillary case was soon closed, no charges were pressed, with James Comey using Obama’s exact rationale, not the law’s.

So it was spoken, so it was done.

The Torture of a Military Hero

Last week, after examining the FBI and Mueller actions targeting Flynn, veteran U.S. Attorney Jeff Jensen recommended the prosecution against Flynn be dropped. The Attorney General agreed.  That should be the ballgame. All that’s left is for Judge Sullivan to take the administrative action of ending Flynn’s nightmare.  According to former Whitewater deputy independent counsel Sol Wisenberg, “The D.C. Circuit … made it very clear you cannot refute it if the government wants to dismiss the case.” If the prosecutor wants to drop a case, the judge can’t do anything about it. You bang the gavel and go home.

But that’s not what has happened. First, Sullivan decided he’s going to allow amicus curiea or “friend of the court” briefs to weigh in on why the charges should not be dropped. Flynn’s lawyer Sidney Powell in response said Sullivan had rejected ‘friend of the court” briefs 24 other times in this case. Two dozen times. But now he’s allowing them, from an anti-Trump group called “Watergate Prosecutors”?

Then Sullivan brought in ol’ Judge Gleeson, a Clinton-appointee fresh off condemning Barr’s decision in an editorial. Fresh off saying the case isn’t over, arguing Sullivan can refuse to dismiss the case. And Techno-Fog noted, he’s a former colleague of Mueller prosecutor Andrew Weissman and he’s represented Obama Deputy Attorney General Sally Yates.

So much for impartiality. They’re not even pretending anymore. This is not a miscarriage of justice. It’s a molestation.

You saw My Cousin Vinnie. When the proof came in that Ralph Macchio was innocent of murder, the good ol’ boy prosecutor dropped the case.  Judge Fred Gwynn banged the gavel, and first-time lawyer Joe Pesci rode off with the lovely Marisa Tomei. The judge didn’t suddenly decide to have another judge come in to hunt for another crime Ralph may have committed. He didn’t bring in people who hated Ralph to say how wrong the prosecutor was for dropping the case.

My Cousin Vinnie got justice right, and it was a comedy. Judge Sullivan has sworn to uphold justice, and this is a farce.

How bad a farce? Only one week ago, the United States Supreme Court dropped a 9-0 decision against judges for pulling “similar amicus antics,” reports Mark Chenoweth in Forbes. Sullivan is ignoring brand new and very loud precedent from the Supreme Court. But he is listening to a former president who briefly taught constitutional law.

Sullivan’s unconstitutional antics were just one of the day’s big Flynn stories. Yesterday we learned the names of the 39 Obama officials who “unmasked” Flynn. Thirty-nine people who, inexplicably, asked to unmask intelligence collections that mentioned Michael Flynn — all between the election and inauguration.

And what a curious gang of officials it is. You’ve got your predictable suspects: Director of National Intelligence Clapper, CIA director John Brennan, FBI Director James Comey.

Clapper was asked about the unmasking today. He claims he cannot remember the details of why he wanted the reports unmasked.

And what about former UN ambassador Samantha Power? She swore under oath to Congress, during questioning by Rep. Lee Zeldin, “I have no recollection of making a request related to General Flynn.” She’d actually made seven requests. Twice in one day. When Roger Stone was accused of lying to Congress, Robert Mueller rolled up dozens of SWAT agents and a CNN crew to haul him away.

Even stranger, the U.S. Ambassador to Italy John R. Phillips unmasked Flynn’s name. What’s Italy got to do with anything? I thought we were hunting Russians. However, we can speculate. Italian intelligence was involved in the counter-intelligence effort launched against members of the Trump Campaign. Remember, AG Barr and U.S. Attorney John Durham went to Italy as part of their investigation into the originals of the Trump Russia black op. The Flynn take down was part of that effort.

In my Obama article, I talked about the crucial January 5, 2017 White House meeting where the strategy was conceived for igniting the Trump Russia Black Op. You know what else happened that day? Obama’s Chief of Staff Denis McDonough unmasked Lt. Gen. Flynn. Why? What’s Obama’s gatekeeper doing unmasking Flynn? Particularly that day? Beginning to put the plan in action?

What Did Joe Know and When Did He Forget It?

However, the biggest surprise on the list of those who unmasked Flynn was one Joseph Biden, Vice President of the United States. On January 12, 2017 he requested an unmasking of Flynn’s name. (Coincidentally, perhaps, the same date the Washington Post ran a story with illegally leaked information about Flynn. It was the one crime we know happened.) What in the world was Joe Biden doing involved in the unmasking of Flynn? Joe has some explaining to do. After all, just two days ago, a foggy Biden admitted he knew of the Flynn investigation, but had nothing to do with it. But here is direct evidence to the contrary.

What was his involvement? Will we ever know? Will he ever know? His growing dementia makes a convenient defense. Of course, his campaign is insisting all this was routine. If that’s true, America and its representative democracy is already over. Those with power were keeping power by any means necessary regardless of elections or rule of law. However, what happened to Flynn was not routine … at least not yet. (More broadly, it was not routine for masking requests to triple during the 2016 campaign, and for Obama in his final days greatly expanding who got to see raw NSA intelligence.)

Joe Biden has far more explaining to do. Those interested in justice have yet another reason to demand he release his public papers sealed at the University of Delaware. (Tara Reade being one, Ukraine being another, his China dealings being a third, Hunter Biden being a fourth, this being a fifth.)

And perhaps the one who has the most explaining to do, the one at the center of all the action and intrigue: former President Barack Obama. Silent on the systematic and endemic abuse of power by those under him. Loud on what should happen to Gen. Flynn.

If I were a Senator or Congressman, the first person I would call to testify about the biggest political crime and scandal in the history of the USA, by FAR, is former President Obama. He knew EVERYTHING. Do it @LindseyGrahamSC, just do it. No more Mr. Nice Guy. No more talk!