Strzok and Page also spoke of the political pressure to wrap up Hillary email investigation. The next day Page convened a meeting at the White House. 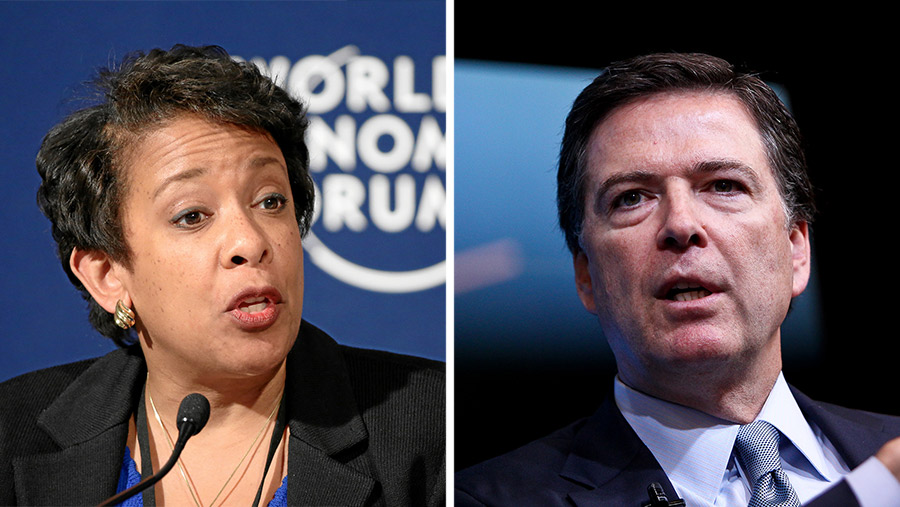 The FBI says it lost five months of text messages between former FBI deputy head of counter-terrorism Peter Strzok and his mistress, FBI lawyer Lisa Page. But even the handful of new texts the DOJ has handed over signal even further proof of the politicization — and outright lying — of the Obama Justice Department and FBI. Specifically, in regards to the investigation into Hillary Clinton’s illicit trafficking of classified material on a private server.

What Comey and Lynch Said

On July 5, 2016 James Comey referred to Hillary Clinton’s “extreme carelessness” with classified information. But he still recommended against prosecution. Hillary would walk. During that address, Comey told the American people that the Justice Department had no idea what he was going to say.

I have not coordinated or reviewed this statement in any way with the Department of Justice or any other part of the government. They do not know what I am about to say.

On July 1, 2016, Loretta Lynch said she would “fully expect to accept [the FBI’s] recommendations” on whether to prosecute Hillary Clinton for her email abuses. Days earlier, she had secretly met with Bill Clinton on an airport tarmac. She admitted that her meeting with the subject of an investigation “cast a cloud” over the case. Still, she would not recuse herself, but would accept whatever the FBI decided.

The meaning was obvious: Comey and Lynch were not coordinating with each other. And nothing had been decided.

However, a clear reading of a text from Lisa Page shows they were in cahoots. Upon hearing of Lynch’s statement, Page texted Strzok:

And yeah, it’s a real profile in couragw [sic], since she knows no charges will be brought.

How did Lynch know no charges would be brought? How would Page know? Consider the date, July 1, 2016. Hillary Clinton would not be interviewed by the FBI — interviewed by Strzok — until the next day.

Of course, Strzok and Page already knew there would be no charges. Strzok had been actively involved in the exoneration memo that had been drawn up in May. This was before the principle suspects in the case, Clinton, Cheryl Mills, Huma Abedin and other top Clinton aides had been interviewed.

As Sharyl Attkisson reports, other texts “indicate the FBI substituted and then omitted damaging language in FBI Director Comey’s July 5, 2016 statement that recommended not be charged.”

It shows the first draft also “noted that Clinton had improperly used personal email to contact President Obama while abroad in the territory of sophisticated adversaries.” That was changed to “another senior government official.” The final version delivered by Comey deleted the reference all together.

(This would also shield Obama from scrutiny. He told CBS he learned about Hillary’s private email use “the same time that everybody else learned it through news reports.” Insisted he didn’t know about her private email. This was false. Top Hillary aide Cheryl Mills even warned Clinton campaign manager John Podesta, “We need to clean this up — he has emails from her — they do not say state.gov.”)

Also deleted from the final version: mention of assessments from the intelligence community “to understand what indications there might be of compromise by hostile actors in connection with the private email operation.”

The new Page-Strzok texts reveal even more evidence of the role in politics in the Clinton email investigation. When Ted Cruz dropped out of the race on May 4, 2016, the GOP nomination was Trump’s. The Trump-Hillary race was on. Strzok texted, “Now the pressure really starts to finish MYE … ” Page responded: “It sure does. We need to talk about follow up call tomorrow.”

According to Attkisson, “MYE” stood for “midyear exam,” and was the FBI case name for the Clinton investigation.

The meeting was hosted by Christopher Fonzone, NSC legal adviser and deputy assistant and counsel to Obama. Also there were general and deputy general counsels from NSA, DOD and DHS. James Comey’s chief counsel James A. Baker — another player now under investigation — was also on hand.

The Washington Post published an article that same day, May 5, on the email investigation. Their sources? “U.S. officials familiar with the matter.” It opens:

Prosecutors and FBI agents investigating Hillary Clinton’s use of a personal email server have so far found scant evidence that the leading Democratic presidential candidate intended to break classification rules, though they are still probing the case aggressively with an eye on interviewing Clinton herself, according to U.S. officials familiar with the matter.

And the evidence was far from scant.

The “brazen plot to exonerate Hillary Clinton,” as one former federal prosecutor put it, was well underway.