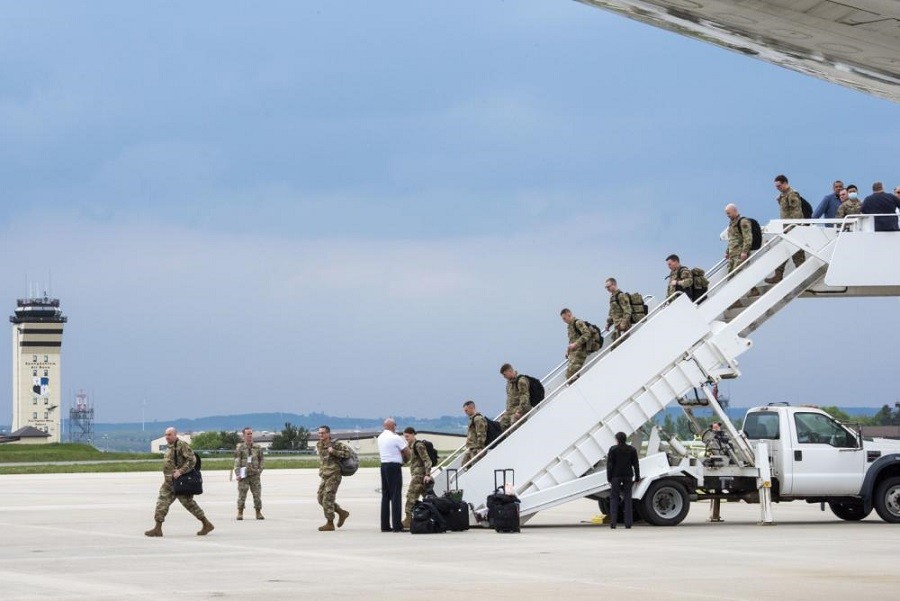 Members of the Vermont Air National Guard arrive at Spangdahlem Air Base in Germany on April 29, 2022.

As more American military personnel arrive in Europe, including the Vermont National Guard warriors shown above, U.S. troops are ramping up efforts to train Ukrainian forces.

The Hill reports that the program “involves taking Ukrainians out of their country to train at multiple locations in Europe” and that more than 220 soldiers from Ukraine have trained on American military equipment so far. Those include the M777 howitzer and Phoenix Ghost unmanned aerial system, both of which are being sent to the front lines to help Ukrainian troops fight off the ongoing Russian invasion.

As The Stream noted back in 2020, The Hill‘s article highlights a fact many Americans may have forgotten: the U.S. military was training troops inside Ukraine for years before Vladimir Putin decided to launch his latest and largest invasion. From 2015 until earlier this year, the Pentagon estimates that more than 23,000 Ukrainian soldiers were trained in some capacity by American forces.

“One of the lowest parts of the mission … was when we had to pull them out of Ukraine, out of the operation back in February,” U.S. Army Brig. Gen. Joseph Hilbert said earlier this week, as quoted by The Hill.

Another American military officer quoted in the article shared an emotional story about a Ukrainian soldier who found out that his hometown was being attacked by Russian forces while in training.

“He and his team immediately stopped with what they were doing and stopped eating their lunch and went back to training knowing that that was how they were going to go back and support their homeland,” said Florida National Guard Lt. Col. Jeremy “Todd” Hopkins.

Please continue to pray for Ukraine’s military, its people and the more than 100,000 U.S. troops stationed across Europe.

Rocket attacks in Iraq – where 2,500 U.S. troops are still stationed – have become so routine that they barely register on the national media’s radar. The Stream believes that any event which endangers members of our nation’s military or the troops they’re fighting alongside is important and deserving of our attention.

The State Department is condemning a Sunday rocket attack on an oil facility in Erbil, according to a Kurdish news network. An Iranian-backed militia is reportedly suspected to have carried out the attack, which was the second in just two weeks. The most recent strike started a fire in an oil tank.

There are also scattered reports about a Wednesday rocket attack targeting Baghdad’s Green Zone, where American troops are stationed and the U.S. Embassy is located. The security firm Crisis24 said “the incident prompted sirens at the U.S. Embassy. Authorities did not immediately confirm any casualties or damages from the attack. Following the incident, gunfire was reported near Muzaffar Square as security forces deployed to search for the militants who fired the rocket.”

I have not been able to find any American media reporting on the May 4 incident, but clearly, American military personnel in Iraq continue to face clear risks. Please pray for these deployed warriors and their families here at home.

Recent rocket attacks on northern Iraq have concentrated on the autonomous Kurdistan region, targeting Erbil, an area near Khabat where there is a refinery and also the Turkish base near Bashiqa. These are the reports I've seen in recent months pic.twitter.com/XAQku0pujQ

The same can be said for about 900 U.S. troops still serving in Syria. Every day, these heroes are hard at work not only to defeat remnants of ISIS, but build relationships with the Syrian population.

Building relationships with our #SDF partners & the locals in NE Syria is an important part of the anti-Daesh mission as our relationships give us strength.

We remain committed to supporting the #SDF as they continue to defend NE Syria. #StrongerTogether pic.twitter.com/C6EJxmfPRV

Also this week, President Biden met with the parents of Austin Tice, a Marine Corps veteran who was abducted in Syria back in 2012 while working as a freelance reporter. Presidents Trump and Obama had previously called for the immediate release of Tice, who served honorably in Iraq and Afghanistan before becoming a journalist.

According to the Marine Corps Times, “experts with firsthand knowledge of the case” said last year that evidence indicated Tice was still alive. Please pray for this heroic hostage and his family as the U.S. government works to finally secure his release.

The ballistic-missile submarine USS Rhode Island is back home in Georgia after a strategic deterrent patrol. The military family pictured below could hardly wait for their hero’s return. 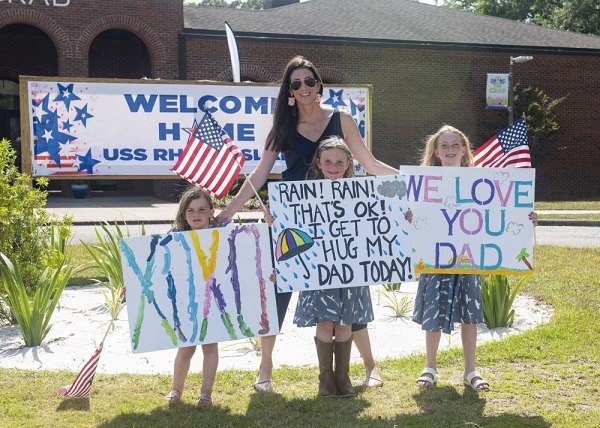 A military family waits to greet their U.S. Navy sailor serving aboard the ballistic-missile submarine USS Rhode Island just before the ship’s homecoming to Naval Submarine Base Kings Bay in Georgia on April 22, 2022.

Welcome home, sailors! From the bottom of our hearts, thank you for defending our freedom and security.

Service & Sacrifice: Out of the Spotlight