Starting today, Brownback co-chairs a summit with leaders of diverse faiths and nations attending. The former ambassador shares why we must stand with the persecuted—notably in China. 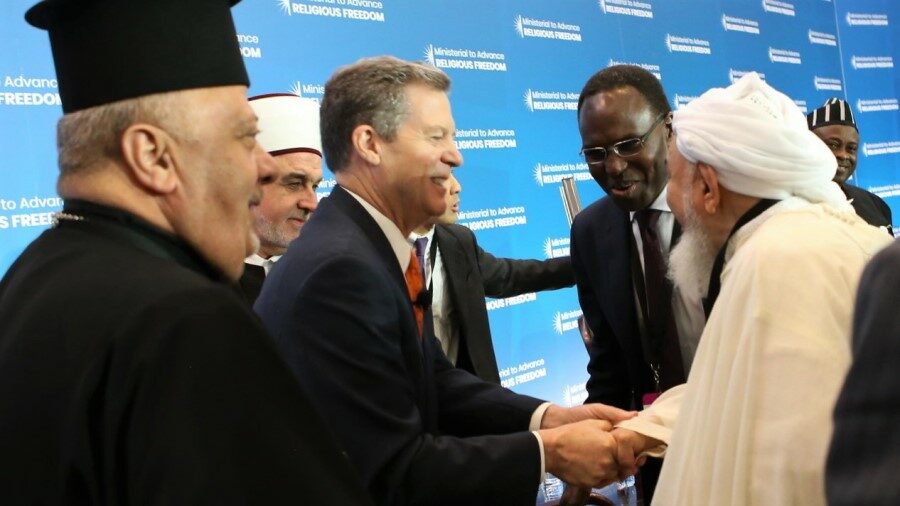 As Ambassador-at-Large for International Religious Freedom, Sam Brownback united diverse leaders in 2019. This week, he co-chairs a similar gathering that seeks further advances in religious freedom.

“Either we will have religious freedom around the world, or we’re going to have the clash of civilizations,” said Ambassador Sam Brownback in an interview.

The stakes of standing up for religious freedom around the world could not be higher. If we have a clash of civilizations, “there will be a lot of bloody carnage.”

He co-chairs the International Religious Freedom Summit 2021 in Washington, D.C., which opened Tuesday. This uniquely bipartisan, interfaith gathering will seek to defend the religious rights of all.

The range of political and religious viewpoints uniting may jar some observers. Former Secretary Pompeo, current House Speaker Nancy Pelosi, and His Holiness the Dalai Lama are among the speakers.

“There are a lot of things we don’t agree upon,” said Brownback. “As somebody in political life for a long time, it’s easy to find the division points. It’s hard to find the unity points. Fortunately, we have one [here]. We should all be able to practice our faith peacefully and in the public square without fear of reprisal.”

Longtime advocate Brownback listed several such hot spots. “It’s what we’re seeing today in places like Nigeria, Burma, and India,” he said. “If people’s rights to practice their faith are not protected, there will be conflict.”

The persecution in China is the worst, Brownback said. Echoing many observers, Brownback notes China as his greatest concern for two reasons. First, he calls the Chinese Communist Party “an equal-opportunity” persecutor. “Communism has trouble with all faiths.”

Many know of the Uyghur Muslims being imprisoned in concentration camps, but the state attacks other religious believers as well. Chinese authorities are tearing down churches and jailing Christian pastors. “Falun Gong practitioners are being murdered and organs harvested. China is at war with faith, and it kind of doesn’t matter which one it is.”

Just as concerning is how China has become a “virtual police state” through cutting-edge technology. ”Their systematic approach is what has me so concerned.”

Already the world’s most populous nation deploys facial recognition systems in churches and a disturbing social credit system. “They’re moving now towards digital currency,” said Brownback. “They literally could wipe you out financially. [The notice] would say: ‘What money you have we’ve taken. We’re not going to let you use it.’”

Not only has China implemented these systems quickly. The former ambassador warns the communist state could easily export these tools to other authoritarian regimes.

‘Friends Help Each Other’

More than 70 partners have convened this privately organized three-day summit, with all major world religions represented. Persecuted believers from select nations will share their stories firsthand. Elected leaders will give updates. And advocates will urge governments to take specific actions.

Relationship building is the focus, Brownback says with a Midwest turn of phrase. “Friends solve problems, strangers don’t. In ‘networking,’ you use each other [and] I’m opposed to that. But friends help each other.”

He also notes specific policy objectives. Advocates want to end the death penalty for apostasy laws in India, and in other nations. They want to break down the Chinese internet firewall. Also, governments must commit to equal citizenship rights for people of minority faiths, he said.

Watch our full interview with Ambassador Brownback below. This week, tune in to main sessions of the IRF Summit at their website.