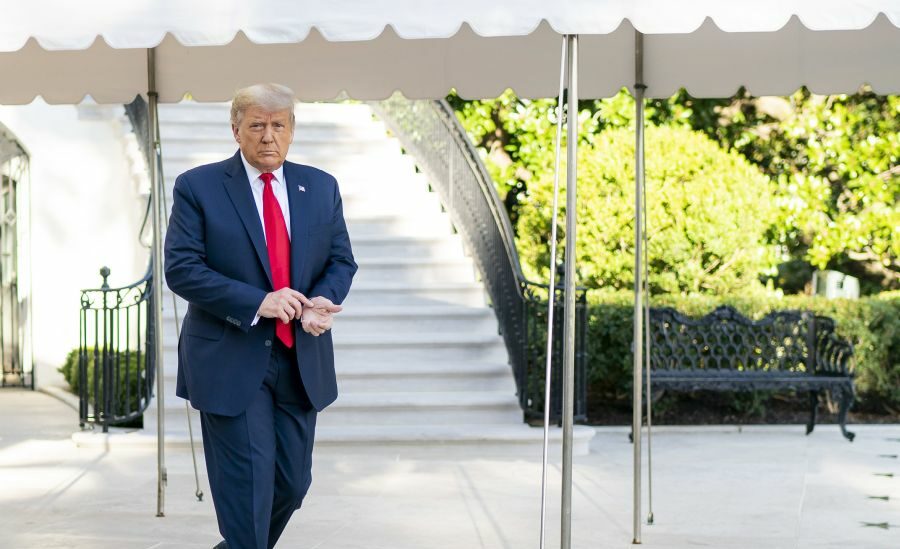 President Donald J. Trump walks from the South Portico entrance of the White House to speak to reporters Saturday, Sept. 19, 2020, before boarding Marine One to begin his trip to Fayetteville, N.C.

I truly hope that by the time you read this article, President Trump will be well on his way to a full and healthy recovery. (Note: Judging from his video released Sunday night that certainly appears the case.) That is certainly what I, along with all other decent human beings, am praying for.

But already, as I write these words early evening, Saturday, October 3, 2020, there is much to reflect on. Here are 10 important considerations.

1) Life is fragile. Until now, President Trump seemed to be enjoying robust health and physical vigor for a 74-year-old man. He could hold multiple rallies in a day and speak for more than 90 minutes at a time, and he seemed to thrive in the midst of the conflict.

Yet no one is invincible, not even the president of the United States. Life should be cherished, appreciated, and protected.

2) COVID-19 is serious. On March 2, I wrote my first article on the virus, emphasizing that it was not an end-time plague from the book of Revelation. But, I wrote, “I recognize the seriousness of this virus.”

I also stated that pandemics and epidemics “are tragic reminders of the broken state of our world and of the frailty of our race. And while doing all we can to prevent and combat the spread of Covid-19, we should pray for the mercy of God.”

Since writing those words, an old friend of mine, about the same age as President Trump, passed away from the virus, other close friends of mine lost close friends, while still others spent weeks in and out of ICU, battling for their lives.

With the president and others close to him testing positive, we are reminded again that COVID-19 is nothing to trivialize.

3) There are cruel people on both the left and the right. When Justice Ruth Bader Ginsburg died, some on the right celebrated her death, even pointing to scripture verses for support. (A common verse was cited was Proverbs 11:10: “When the righteous prosper, the city rejoices; when the wicked perish, there are shouts of joy.”)

In fact, some days later, when I posted one of her sayings with which I agreed – making clear that I differed deeply with her ideology – some asked, “Are you going to quote Hitler next?”

We are now seeing this same cruelty expressed toward President Trump, with some celebrities even praying openly for his death. (I won’t dignify them here by linking to their words.) That is sick, ugly, and inexcusable.

4) There are decent people on both the left and the right. Despite the harsh rhetoric on display during the presidential debate, candidate Joe Biden showed real class in expressing his hopes for Trump’s recovery while also announcing he was suspending all attack ads. (As of Sunday, many were still running.) In the same way, Tucker Carlson, known for his acerbic tongue, spoke graciously of Justice Ginsburg after her passing.

5) The president is just a regular human being. Although the Trump name and brand are bigger than life, Donald Trump is just another person, a man with fears and concerns and pressures like anyone else. When you have a potential brush with death, when you have to be quarantined and hospitalized, you recognize your humanity. But others can recognize it too, reminding us that, behind the braggadocios Trump persona is the Trump person — someone just like the rest of us, someone who needs our prayers.

6) The office of the president has massive consequence. It’s one thing to think about Trump having four more years or Biden being the next president through the electoral process. It’s another thing to realize that, in a moment’s time, there could be a new president – President Mike Pence or President Nancy Pelosi.

Suddenly, you realize just how large this and consequential the office of the President of the United States really is. Whoever steps into this office steps into some very big shoes.

7) The left would rage against Mike Pence as president. To be sure, Vice President Pence has not tweaked the nose of the left the way Donald Trump has. He does not engage in the kind of insults and attacks that our president has been famous for. So, the unique type of animosity that comes against Trump would not come against him.

On the other hand, because Pence is known as a committed evangelical Christian, there would be an even more hysterical attack against him by the left, from the media to politicians and from celebrities to the universities. I have written about this before, but now, with talk about possible transfer of power and the like, it becomes more of a potential reality.

8) No one knows what will happen on November 3. Barring divine revelation, we have no idea if the elections will take place, as scheduled (who knows what other crisis might hit before then), and we have no idea if the two presidential candidates will be Trump and Biden. I certainly expect to vote on November 3, and I plan to vote for Donald Trump. But this latest, serious episode reminds us the extraordinarily uncertain times in which we live. And then, even if all goes well on election day, will we have a definitive outcome?

9) The virus might change President Trump. All of us are works in progress, and hopefully, all of us will keep growing and maturing as human beings until we leave this earth. Perhaps this serious illness will have a positive effect on our president, giving him a greater humility and, perhaps, a greater kindness towards others, just as kindness was shown towards him.

10) God is not sitting idly by, hoping and wishing. He has a plan, and He is working it out in the midst of the chaos and confusion. As I tweeted on October 2, “Of this I am sure. In the midst of the political chaos, the virus, the shutdown, the protests, the riots, the SCOTUS seat, and now the president’s positive COVID test, God has a plan, making our prayer simple: Your name be hallowed, Father! Your kingdom come! Your will be done!”

Right now, tens of millions of believers are praying for President Trump and the nation. May God hear and answer those prayers, and may He have mercy on our land.