Two prominent politicians recently came under fire for using the 'R-Word,' which is a hurtful slur toward people with special needs. The word has no place in our society. 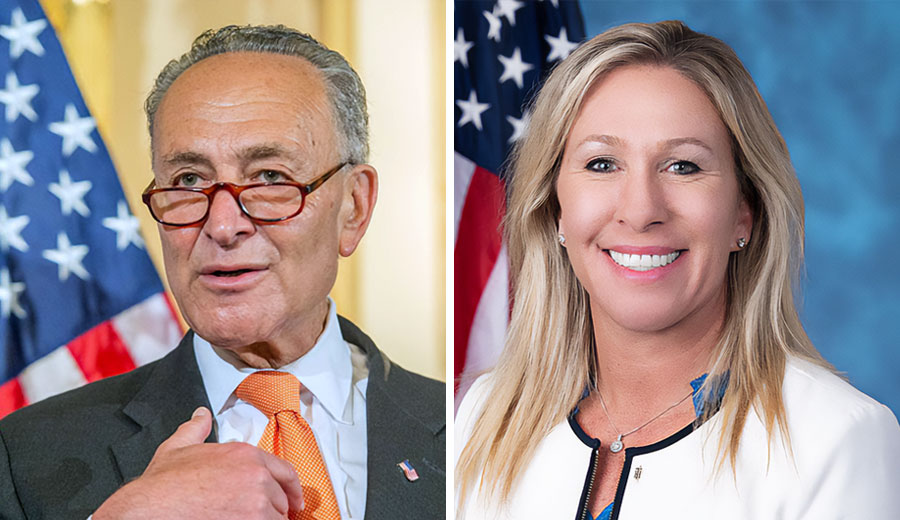 Sen. Chuck Schumer (D-NY), left, and Rep. Marjorie Taylor Greene (R-GA), right, have both been criticized for using the "R-Word" to describe people with special needs.

My youngest daughter has Trisomy 21, which is most commonly known as Down syndrome. Almost every day, she works with therapists on skills like speech, visual recognition, eating, movement and coordination. Natalie’s progress over the past 16 months has been amazing to witness.

Having a front row seat to the development of a child with Down syndrome has almost completely changed my family’s perspective. My wife and I are now starting to understand how many challenges a child with physical, intellectual or developmental disabilities must conquer on a daily basis. We have also gained a tremendous amount of respect for all the extraordinary parents, siblings and caregivers for people with special needs.

That’s why it hurts when nationally recognized politicians like Democratic Sen. Chuck Schumer or Republican Rep. Marjorie Taylor Greene use the “R-Word.” Schumer used the slur during a recent podcast, while Taylor-Greene did so in an online video posted while she was running for Congress.

I have called on both politicians to apologize. Schumer did so through a spokesperson, which isn’t good enough.

@SenSchumer: I have a 1-year-old daughter with #DownSyndrome. While I don’t think you intentionally insulted children with special needs, a leader’s words matter.

Don’t have a spokesperson issue your apology. Set the example & do it yourself. #EndTheRWord

The words of the Senate Majority Leader matter, which is why he owes it to the special needs community and the American public to say he’s sorry. If my daughter can learn to talk with the assistance of a speech therapist, surely Sen. Schumer can muster a few words to apologize and explain why the “R-Word” has no place in American society.

To my knowledge, Rep. Taylor Greene has not apologized, even through a spokesperson. If she truly cares about people with special needs, she will try to correct her mistake.

It’s easy to say the “r” word in an online video & equate #DownSyndrome with being “stupid.” It’s not easy to go through 3-4 therapies per week like our daughter & emerge with this smile.

I realize this column might come off as promoting political correctness or emboldening “cancel culture.” That is not my intention. I am not demanding anyone’s resignation, but instead asking leaders with national platforms to help educate the public on why America’s special needs community is so unique. As a relatively new parent of a child with Down syndrome, the “R-Word” now elicits a visceral reaction. I can’t imagine how much it would devastate Natalie to hear when she’s older.

The Special Olympics has long been leading an international campaign to end the “R-Word.” While there has been substantial progress, the “R-Word” remains prevalent on social media according to the organization’s research. That must change.

Many readers of The Stream are of Christian faith. That’s why I am humbly requesting that you ask your pastors and priests to educate their congregations about the “R-Word’s” hurtful nature. The least we can do as Christians is to show these exceptional individuals and their families how much value they bring to the world.

Republicans and Democrats don’t agree on much these days, but I think the vast majority of American adults believe there is no bigger responsibility than leaving a better world for our children. One way to help do just that is by empowering one of our society’s most precious and vulnerable groups.

Shortly before Natalie was born, I was sitting in a waterfront restaurant here in Florida when I overheard someone say the “R-Word.” He was an imposing figure who could have easily thrown me off the pier. Yet when I walked over and explained why the word was so cruel, he expressed nothing but contrition. His girlfriend even shed a tear. That’s the power of educating people who — through no fault of their own — lack prior exposure to the special needs community.

Our 1-year-old daughter with Down syndrome is not a “r–––d.” Natalie is a beautiful human being who’s already blessing everyone around her with boundless happiness and joy. Every child with special needs deserves to grow up in a world without the “R-Word.” It’s up to us to make it happen.