On the right and the left, people often tell women that motherhood is an exclusive job. 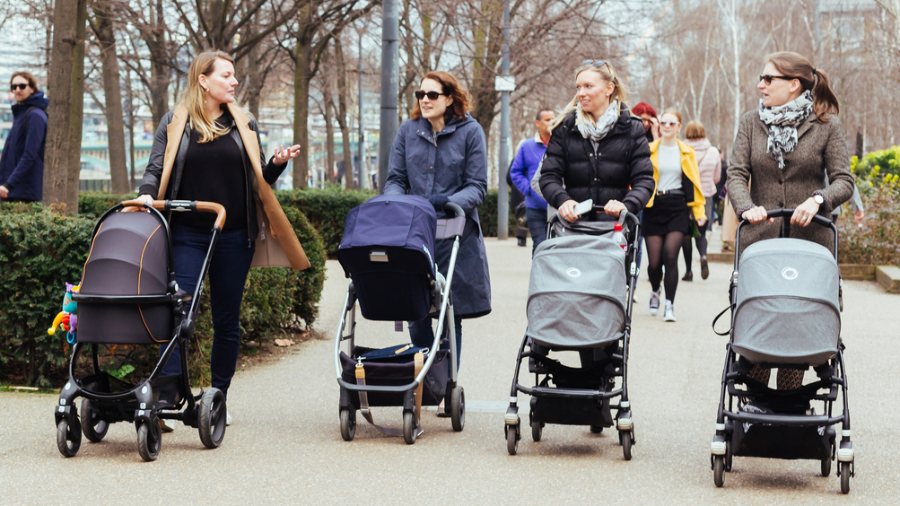 March 25 2018: four mothers walking with the strollers along the Southbank, London

My toddler was throwing a fit. I’d confiscated the items he’d excavated from the trashcan, and the puppy was eating his beloved “vroom vrooms.” I was on the phone, trying to sound calm as I wrested Hot Wheels from dog teeth. I needed coffee. We desperately needed breakfast. As sanity wriggled from my mental grasp, I noticed it was only 7:45 a.m.

Not every day is like this. But days like this go a long way in explaining the conflict women often feel about becoming a mom. As Guardian columnist Rhiannon Lucy Cosslett noted this month, millennial women “have more freedom to articulate why we might choose to remain child-free.” And yet, there’s a “biological, hormonal, emotional desire to reproduce.” This is “unfashionable” to admit among today’s feminists.

We need a village. It takes a village to raise children. But not Hillary Clinton’s village. A biblical one.

Be Anything You Want — Or Be a Mom

If acknowledging women’s biological, hormonal, and emotional desire to have children is unfashionable among progressive types, admitting that you want to do things besides mothering is often unfashionable in more traditional circles. Each side doubts that mother can be anything but an exclusive job.

That’s why we hear unabashed advocacy for abortion on demand. (Very few people in the U.S. actually want such “reproductive justice.”) It’s also why many conservatives, hard as they rightly fight against abortion, may fail to address the root problems and concerns that cause women to consider abortion — or never seriously consider motherhood — in the first place.

The night before the eventful morning mentioned above (which ended in chubby hands pulling my face in for a kiss after breakfast), my husband and I discussed our future. Was it the right time to add another baby to the mix? He noted my juggling act of working part-time from home while mothering. I admit I’m frazzled more often than I like to be.

But for me, like many women, not working at all isn’t an option. Work is a huge part of who I am. It always has been. Now, “Mama” is also an inseparable part of my being. Could I add another kid and do everything I want to do — believe I’m called to do? Not without more help, I said.

To some, the idea of a village raising a child carries connotations of stolen parental rights and government control. These are horrors to guard against. But the notion of a “village” — relatives, friends, church family — sharing burdens through all life’s seasons including parenthood, is biblical and historical. Moreover, this kind of community is necessary for human flourishing.

We can’t expect to create a thriving, pro-life society if practical help is hard to come by for the average woman.

Consider the increase in depression and anxiety amid pandemic-induced stress and social isolation. Prior to that, researchers were already pointing to alarming levels of mental illness. Lack of meaningful community in the modern world has been repeatedly identified as a primary culprit. If this is true for people at large, why don’t we think it’s true for parents? Why do we act — from the churches that preach rigid, extra-biblical household roles and discourage career ambition in women to the boardrooms that deny parental leave and other family-friendly policies — as if mothers have to do it all alone?

I have a good marriage with a supportive husband. We have stable income. And we have a local community of good friends and family. I can easily ask for more help. That’s a privilege, not the norm.

As a Christian, I also believe in the inherent value of human life and God’s divine provision. But we can’t expect to create a thriving, pro-life society if practical help is hard to come by for the average woman.

The Possibility of a Culture That Values Motherhood

Women weren’t created exclusively to become mothers, or to become mothers exclusively once we have our first child. But as even fourth-wave feminists sometimes admit, motherhood is intrinsic to womanhood. It’s a pull most of us can’t ignore. Sadly, it’s not one our culture readily celebrates or accommodates, despite its necessity to the health and very existence of society.

In her column, Cosslett says she looks forward to seeing how a new generation wrestles with motherhood. So do I. I hope that wrestling includes recognizing the beauty and possibility of motherhood — that adding mom to one’s list of titles doesn’t mean erasing the others. That, in fact, adding mom enriches one’s life.

For that to be completely true, we must pursue a culture that genuinely values women and family, and motherhood. Practically, our society must reflect those values.