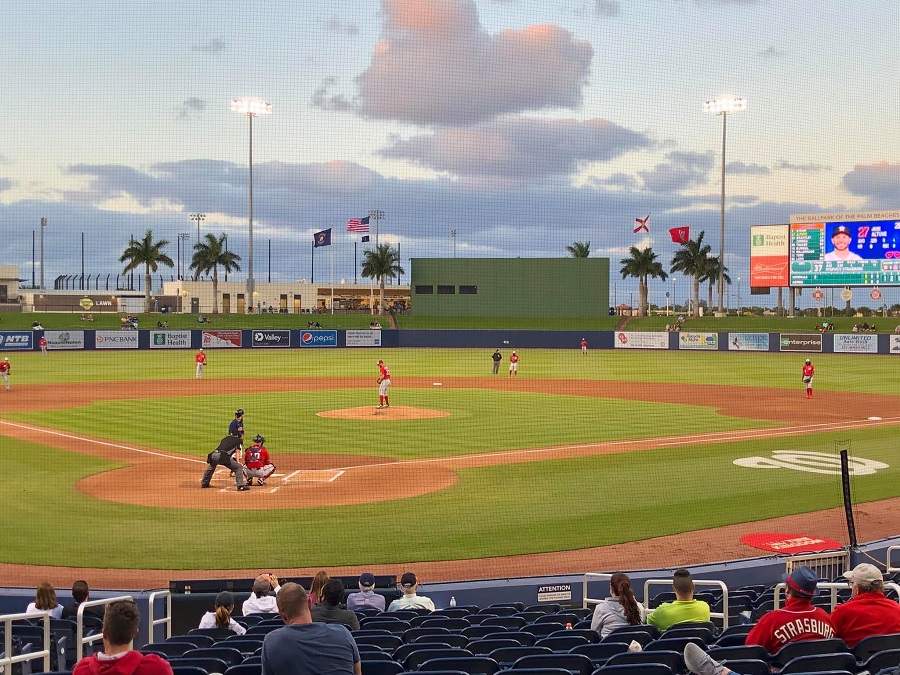 The Houston Astros and Washington Nationals square off at their shared Ballpark of the Palm Beaches in West Palm Beach, Florida, in a Major League Baseball Spring Training game on March 9, 2021.

As I sat in the stands on March 1 watching a Major League Baseball game in person for the first time in almost a year, I thought about the millions of fans who would give almost anything to attend a ballgame.

In less than a month, it appears that spectators in almost every MLB city will get that chance. At long last, baseball is truly back.

I’ve been to three Spring Training games so far this season at The Ballpark of the Palm Beaches, which is shared by the Washington Nationals and Houston Astros in West Palm Beach, Florida. Maximum attendance is about a quarter of the ballpark’s normal 6,500 capacity. Ushers and stadium announcers regularly but politely remind fans to wear masks unless actively eating or drinking. At no time have I felt anything other than completely safe.

It is so nice to finally be back at @Ballpark_PB. Go @Nationals! #SpringTraining @TalkNats #Nats #NATITUDE pic.twitter.com/FxzUpSsewk

The players also appear relaxed, which is in stark contrast to a confusing and poorly planned 2020 season. Without delving too far back into the sport’s worst year since the 1994 strike, let’s just say that baseball isn’t the same without fans and 60 games is most certainly not 162. In my humble opinion, MLB commissioner Rob Manfred’s handling of the COVID-19 pandemic’s first year was an unmitigated disaster.

With the 2020 train wreck behind us, baseball players, coaches, umpires, employees and fans can hopefully get back to enjoying the game we love instead of silly public arguments over money that angered many lifelong fans – including yours truly – as we dealt with the health and economic consequences of the coronavirus and ensuing lockdowns.

While back in the ballpark over the past two-plus weeks, things feel like they’re finally getting back to normal. I haven’t seen any fans bickering with ushers over stadium mask policies. Also noticeably absent are negative chants directed at opposing players. Even the Astros, who were largely able to avoid being directly confronted by fans furious over last year’s cheating scandal, have been spared from taunts at the two Houston games I’ve attended.

The bottom line is that most baseball fans are simply thrilled to be back in the ballpark. Watching a game on TV – especially with empty stands and fake crowd noise – pales in comparison to cheering for your favorite team, hearing the crack of the bat, seeing the majestic green grass and singing Take Me Out to the Ball Game.

On March 21, our 1-year-old daughter Natalie will experience these thrills for the first time. Natalie, who has Down syndrome, was born on February 4, 2020, not long before the pandemic shut down the civilized world. Nat’s name is inspired by the 2019 World Series Champion Nats and their pair of mottos: “stay in the fight” and “go 1-0 every day.” For the past 13 months, that’s exactly what Natalie has been doing.

Baseball should always put its fans first – especially the youngest. While a relatively small number of kids have been able to attend MLB games so far this spring, seeing the beaming faces of children as they walk into ballparks in cities across America on Opening Day could be one of the country’s happiest moments in quite a while.

Until then, Spring Training continues in the Arizona desert and here in the Florida sunshine. My wife, oldest daughter and I can’t wait to see little Nat’s huge smile as she enjoys her first-ever ballgame on World Down Syndrome Day. To me, the happiness of children is what baseball is all about.