The controversy over the poor treatment of National Guard service members at the U.S. Capitol is a reminder of our military community's hard work not just last week in Washington, but around the world for the past 20 years. 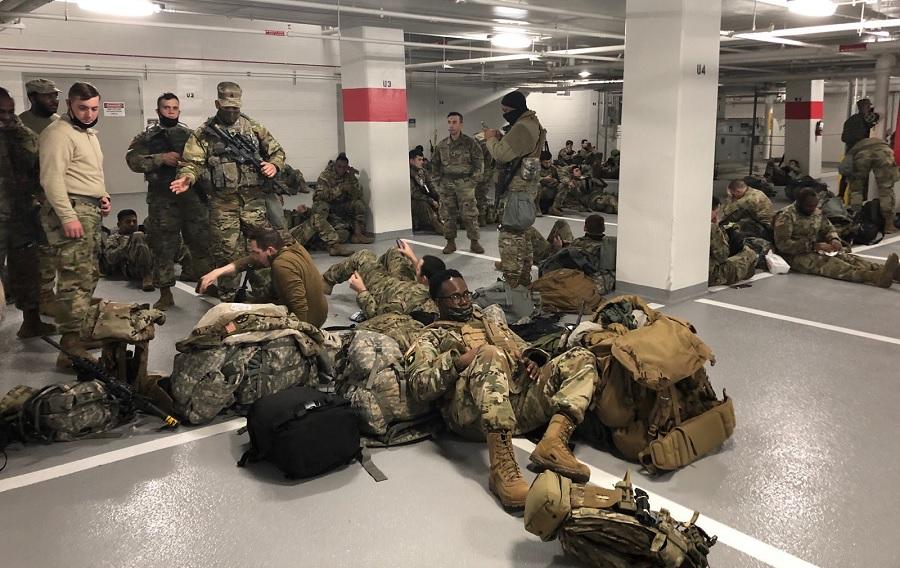 National Guard troops wait on the ground level of a cold parking garage near the U.S. Capitol on January 21, 2021.

If there’s one thing almost every American can agree on, it’s supporting the brave men and women of our military.

Outrage was universal when reports began to circulate last week about some National Guard troops being banished from the U.S. Capitol and sent to a freezing nearby parking garage. Americans of all political stripes were furious to see brave men and women in uniform sitting and even sleeping on cold floors after successfully protecting the inauguration two days earlier.

Our troops deserve the utmost honor & respect for securing the Capitol & defending democracy this week.

This is unconscionable & unsafe. Whoever’s decision this was to house our National Guardsmen & women in underground parking lots must be held accountable. pic.twitter.com/mBwpoog6YC

Earlier this week, I had the profound honor of meeting the brave Illinoisan National Guard troops who answered the call and came to DC to protect our Capitol. What happened to our nation's Guardsmen last night should never have happened.

To their credit, many other politicians from both parties sprung to action, including President Joe Biden and First Lady Jill Biden. Anytime Democrats and Republicans set aside their differences to help our military community is a good thing, especially during these hyper-partisan times. Everyone who was involved in fixing the National Guard mess should be applauded.

As I watched and shared in the outrage, I thought about something I discovered while doing research for my latest book, Three Wise Men. Back in 2010, a U.S. Army Green Beret named Ben Wise flew to Afghanistan after the memorial service for his big brother, CIA contractor and former Navy SEAL Jeremy Wise, who had been killed just weeks earlier in the same country.

When Ben joined his Special Forces team at an old Soviet-era base, he was greeted with deplorable living conditions. Ben’s younger brother Beau and I wrote about what life was like for Ben and his fellow Green Berets during that combat deployment in the desolate mountains of Kunduz.

“In addition to the lousy setup, Ben’s team had virtually zero air support while responsible for controlling approximately 600 miles of some of the world’s most challenging terrain. The team often felt abandoned in northern Afghanistan while many military assets went south, and even turned down shipments of care packages from home since they knew there would be a long, treacherous drive to go pick everything up. Some teammates laughed when they were offered a shipment of beer and steaks for the Super Bowl since they didn’t even have a refrigerator.

Most nights on that deployment, twelve Green Berets would sleep in a fifteen-by-twenty room.”

These Special Forces soldiers were some of America’s most elite warfighters, yet in this particular case 11 years ago, they were treated more like an afterthought.

At the time, there was no national outrage, tweets from senators, phone calls by the president (to my knowledge) or visits by the first lady. It’s just one example of our courageous troops being largely forgotten by most of their fellow Americans back home as they quietly risk their lives in some of the world’s most perilous places.

Off and on for the past 20 years, too many Americans have picked and chosen when to remember that our military is still at war. I am just as guilty as anyone, having been distracted at times by movies, music, sports and other hobbies.

Most service members and veterans I’ve met aren’t looking for attention or sympathy. That’s not what this column is seeking. Instead, it’s a call to constantly remind ourselves of the sacrifices being made by a tiny percentage of our country’s population so we can do things like go to church, spend time with our families and enjoy everyday life. If we forget, apathy sets in, which can lead to inexcusable events like troops sleeping in a cold parking garage in our nation’s capital or a decaying old base without a refrigerator in Afghanistan.

A convoy of U.S. troops reportedly crossed into Syria from Iraq last week. The i24News report was subsequently disputed by The Jerusalem Post, which called it “Syrian government propaganda” and a “misreading of events.” Instead, the newspaper reported, it was one of the difficult but relatively routine resupply missions that the U.S. military often runs between the two countries.

As the below January 4 photo confirms, however, U.S. troops are definitely still stationed in Syria. 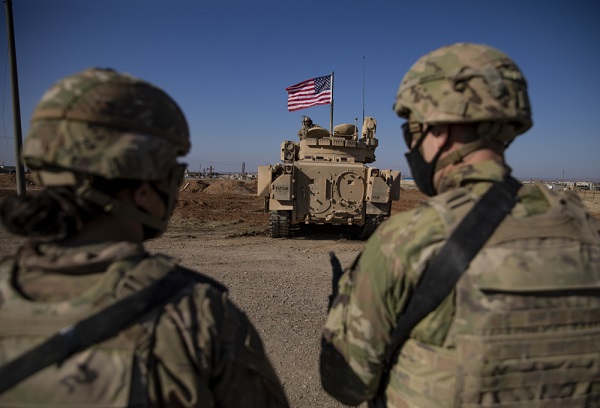 How many Americans realize that hundreds of volunteer military warriors are serving in Syria, which is one of the world’s most dangerous and decimated countries? How many know that thousands of American troops are still in Iraq and Afghanistan? While the previous administration did bring thousands of service members home before President Donald Trump left office, we cannot forget the valiant men and women left behind.

Stay in the Fight With Them

Every night before bed, I try to say a prayer for our troops, veterans and their families. Every morning, I try to think about what life is like for an overseas service member as I look out my kitchen window and sip my coffee. Whenever given the chance, I try to remind my family, friends and neighbors that even though we might not see it on TV nearly as much as 15-20 years ago, our military is still at war.

If last week taught us anything, it’s that Americans will always rally around its protectors. The only question is what we will collectively do to support our troops in the days, weeks, months and years ahead. If our extraordinary military community can stay in the fight after almost 20 years of constant war, so can we.