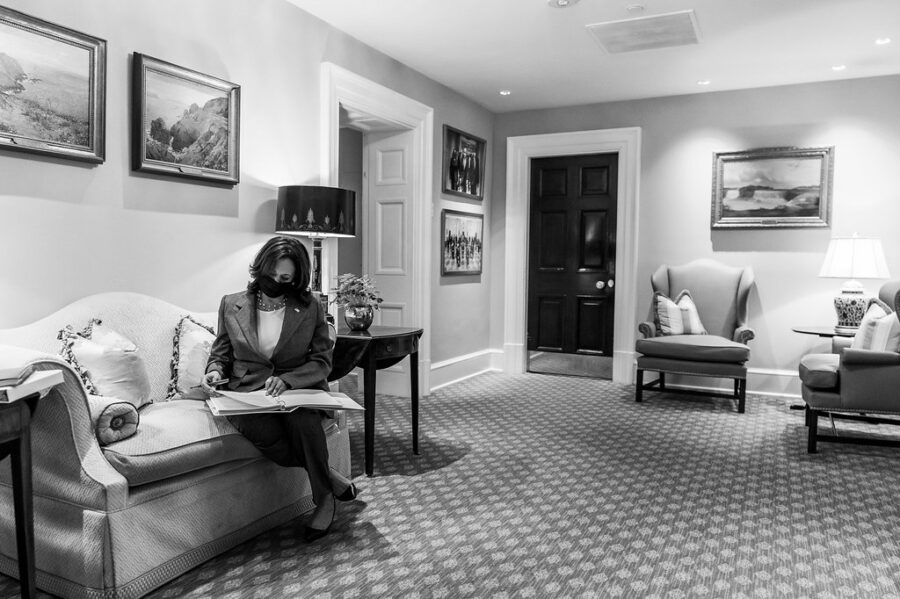 Editor’s Note: On December 20, 2021, the White House announced that First Dog Major had been let go. The Bidens dismissed the German shepherd, replacing him with a new puppy, allegedly over Major’s inability to adjust to life in the White House. He needed a “quieter environment,” the White House said. It has been the only firing of the Biden presidency.

But Major is refusing to go quietly. He’s written a tell-all book. It’s called Major Disaster: My Year at the Biden White House.

To mark the one year anniversary of the Biden Presidency, The Stream has been provided exclusive excerpts from the upcoming book.

President Harry Truman used to say, “If you want a friend in Washington, get a dog.” I’ll add a caveat. If you can’t get a dog, let’s hope one’s around when you need it.

The night was June 9. The clock was nearing midnight, and I was making my rounds of the White House. I’d come down the stairs from the 2nd floor residence and was working my way to the West Wing.

The Ghosts in the White House

They say these halls are haunted by the ghost of Abraham Lincoln, particularly in times of national peril. The Queen of the Netherlands got a friendly visit when she stayed in the Lincoln Bedroom. Winston Churchill refused to sleep at the White House after being spooked on his first overnight stay. Lincoln’s not the only ghost to walk the White House. Hillary Clinton said she’d have conversations with Eleanor Roosevelt after a tough day.

I don’t exactly believe in ghosts. The supernatural is a cat thing.

Still, walking a creaky 250-year-old house in the middle of the night where so much history has been made can be unnerving. Not for a German Shepherd, of course. But for people.

I’d just passed the Oval Office when I heard shuffling from an office just around the corner. I nudged the door open with my nose, and quietly entered. The large dark brown leather chair was turned away from me, slowly pivoting left and right seemingly by itself, as if its ghostly occupant was scanning the lawn beyond the windows.

I let out a little bark. Okay, maybe more of a scared yelp. The chair immediately swung around to reveal Vice President Kamala Harris. Her eyes grew wide in surprise. Just as surprising to me was how weary she looked, and dare I say haggard. Her hair, usually impeccably styled, looked as if she’d been running her hands through it for hours. Her blue suit jacket looked wrinkled. I couldn’t help but notice her delicious-looking designer shoes had been tossed at the side of the desk.

“I was going to ask you the same thing.” We both have our reputations. In fact, until that night, I had been rather infuriated that when I nipped one Secret Service agent, I’d be shipped off to obedience training, but she could bite the heads off staffers and wouldn’t be sent anywhere. Not even the border.

She continued smiling, but her brown eyes grew downcast. I gingerly moved forward. She wearily rose to her feet, circled the desk, and we met at a stylish beige love seat. She climbed onto the couch, swung her legs underneath her and began rubbing my ears. That was nice. That was real nice.

But her heavy sighs indicated something clearly wrong. I tilted my head as if to say “What’s the matter?” Truth be told, I already knew. Earlier that day, Miss Kamala had returned from her first foreign trip as VP. She’d gone to Guatemala and Mexico. And it had been a disaster. Particularly when she whiffed on a softball question from NBC’s Lester Holt about going to the border. It happens. Rookie mistakes, and all that. And historically VP’s can have a rough go of it overseas.

“Who? Who would do such a thing?” Kamala said aloud, giving the cushion a series of firm pounds, growing weaker with each one. This is where English being a second language and not having the ability to manipulate a smartphone really stinks. I jumped away from the couch, spun in a circle, pointed my nose east and barked. Repeat.

“What, Major? What’s over there? You see something?” What’s over to the east of here? I could see her eyes follow the path east in her imagination. First looking for an interloper or agent. Then farther beyond. Slowly, her eyes grew wide as she realized what lay east from her office within the White House. “You think?!?” One single, strong bark in the affirmative.

I wouldn’t bet all my toys on it, but I’d bet plenty those stories were planted by the East Wing. The First Lady’s office. Where Master Jill reigns.

“What does she have against me?” Miss Kamala asked, before immediately adding, “Strike that.” After all, it’s not like Master Jill would ever forgive or forget that during the campaign Miss Kamala had called Mr. Joe a racist. (She never forgave me for chewing one of her tacky Valentine’s decorations.) But I knew full well, this thing with Miss Kamala was not just personal, it’s business.

With Mr. Joe as empty as a water bowl in the high desert, there’s a massive power void in the White House. Who would really control the agenda? Who would really run the country? The Obama people, like Susan Rice and Valerie Jarrett? The Biden political people, like Master Ron Klain? Master Jill? Miss Kamala, the only one elected? All factions were fighting, manipulating to gain advantage. Particularly Chill Dr. Jill.

That very morning, with those White House-generated CNN slams of Miss Kamala still on their home page, Mr. Joe was on the way to his first G7 meeting. Dr. Jill tweeted out this image.

That’s Dr. Jill behind the president’s desk on Air Force One — his presidential jacket hanging over her like a mantel — going over briefing manuals to prepare herself for the G7 summit. The symbolism could not be clearer, to world leaders, to those at home. To Miss Kamala. “I’m in charge. You gotta deal with me.” Master Jill was laying claim to control of the White House, and objective one was ruining the woman who, constitutionally, is supposed to be next in line. (And, not coincidentally, the one who holds the key to enacting the 25th Amendment.)

“I wasn’t ready for this,” Kamala said. I don’t know if she was referring to the job as VP or the betrayal. That only weeks into her job those inside these walls would set out to destroy her.

“Who am I supposed to trust, Major?” I don’t know if she’d understand even if she could speak German shepherd. But in that dark hour, I sensed in her the dawn of a self-realization. She’d sacrificed core convictions for political expediency. She had had ambition without vision. She had no anchor in something bigger … or some One.

She knew she’d been elevated to the White House not because of character or achievement or skill or even a personal bond with Mr. Joe. Not by her mind or heart, but her skin tone and gender. Even her friends describe her as thin-skinned, overly-cautious and full of insecurities.

Who can you trust when you know you can’t trust yourself?

I moved back over toward the couch. She wrapped her arms around my neck and wept.