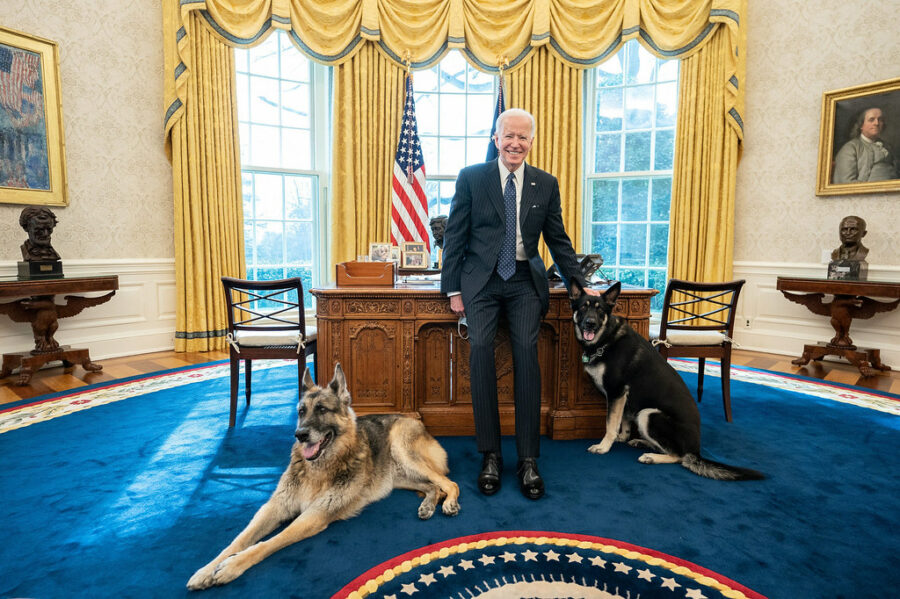 Major with Joe Biden and the Biden's late dog Champ in the Oval Office, February 9, 2021.

Editor’s Note: On December 20, 2021, the White House announced that First Dog Major had been let go. The Bidens dismissed the German shepherd, replacing him with a new puppy, allegedly over Major’s inability to adjust to life in the White House. He needed a “quieter environment,” the White House said. It has been the only firing of the Biden presidency.

But Major is refusing to go quietly. He’s written a tell-all book. It’s called Major Disaster: My Year at the Biden White House.

To mark the one year anniversary of the Biden Presidency, The Stream has been provided exclusive excerpts from the upcoming book.

Today, excerpts from the chapter “Encounters With Hunter Biden”

You can’t be part of the Biden Family for a year and work in the Biden White House without having some interesting encounters. Particularly interesting were my encounters with Hunter Biden.

Look, I’m not one to judge. And I can certainly relate to someone who cops to sniffing carpets. But when I heard Mr. Joe call his son Hunter “the smartest guy I know” my first instinct was to bark, “You’ve got to get out of the basement more often.” Then I realized, “Here’s a guy who made millions and millions of dollars all around the world, with no discernible talent.”

Sure, he’s honest enough to admit that’s because his name was Biden and people wanted access to the Big Guy. But the fact remains his bowl is full. Made the most of his opportunities, despite his addictions and, uh, being a hound dog.

More to Ukraine Story Than We Know?

Often I’d be laying upstairs in the living quarters of the White House and hear Mr. Joe talking to Mr. Hunter. Whatever you make think of Mr. Hunter, it’s very clear that Mr. Joe trusts his counsel. Particularly with the dirty underbelly of international wheeling and dealing.

One day, in the spring, I heard Mr. Joe mention “Ukraine.” My ears perked up. You know, because of all hubbub about the Hunter being on the board of Burisma, and Mr. Joe threatening Ukraine’s president if he didn’t fire the prosecutor looking into Burisma.

Mr. Hunter started running through these really long, tongue-tying names, offering his assessment. This one’s “aligned with Putin,” that one “will flip on us in a New York minute,” that one’s “in our pocket.” Suddenly, a light bulb went off.

What if we’ve got the whole Hunter-Burisma story wrong? Here’s what we know:

What if Mr. Hunter wasn’t just raking in millions at Burisma just for being Mr. Joe’s son “despite having no expertise in the energy field”? What if he was put on Burisma’s board by Mr. Joe as his eyes-and-ears on the ground? To keep Burisma on track with whatever Master Obama, Soros and Mr. Joe were up to.

Suddenly, Mr. Joe blackmailing Ukraine’s president makes more sense, doesn’t it? He didn’t threaten to withhold $1 billion in aid to protect Mr. Hunter. He did it to protect what Obama-Biden-Soros were up to in Ukraine.

Suddenly, Trump’s question to Ukraine’s new president asking him to look into the Bidens’ activities makes sense too.

Suddenly, the absolute panic by NSC and State Dept. staffers loyal to Mr. Joe and Obama when they heard Trump’s call makes sense too.

Suddenly, the mad hysteria by the Swamp and rush to instantly impeach make sense too.

But what do I know? I’m just a dog who sits on a lot of newspaper.

Hunter took up painting around the time I joined the family. When he’d visit, his paints and straws and canvases would be strewn all over the place. And yes, I admit to once knocking a coffee table loaded with his paints. Not my fault, really. Mr. Joe had rolled a tennis ball towards it, and who can resist that? I’m only canine.

One afternoon, shortly after Mr. Joe went to bed for the night, Hunter lifts his head from a canvas and declares, “I can sell these for lots of money! And don’t have to fly to Beijing or Ukraine to do it!” And in less time than it took me to learn to go outside when I needed to go, Hunter had himself a fancy gallery exhibit.

Are they any good? To me they look like what happens when I kick up mud with my hind legs and it sprays the linen hanging on a clothesline. But what do I know?

What I do know is one day I didn’t make it outside in time to the chagrin of a white rug in the Executive Residence. Hunter comes, cuts a rectangle out of the rug, puts it in a frame and sells it for $435,000.

That may well make him the smartest guy I know.

Now given the art world is notorious for money laundering, and unknown actors handing over hundreds of thousands of dollars to the president’s novice-of-a-painter son is dubious at best, you’d think the Masters would be concerned. The Masters could care less. Nor the media. Have dinner at Trump International Hotel across the street from the White House, and there’d be screams for a special counsel. Hunter’s painting sales? “Back to you, Don Lemon.”

When some ethics pros did start to raise a stink, the Masters came up with this idea that “Hunter won’t know who’s buying the paintings.” As if a wink-wink nod-nod wouldn’t give it away. Or the buyer couldn’t tweet out a picture with the Hunter painting in the background. Nobody was fooled. Nobody acted to stop the scheme.

If this was a legitimate enterprise, Hunter would have done the paintings anonymously. Let the works stand on their own. Instead he’s rolling in the cash like a hound rolling in a puddle.

Maybe I’m just jealous. After all, I’m the only member of the Biden Family who didn’t profit from their deals with the Communist Chinese.

If They Reject Their Own Flesh and Blood, What Do You Think They’ll Do to You?

Truth be told, I felt for Hunter. His eyes always had a bit of the sad little puppy about them. Damaged. Haunted.

But you know who I felt for even more? Hunter’s three-year-old daughter Navy Joan. About the same age I am.

Hunter fathered her with a stripper named Lunden Roberts. Sweet Navy Joan is Mr. Joe and Dr. Jill’s granddaughter just as much as any of their other grandchildren. And yet, last Christmas, chill Master Jill refused to put a stocking up for her in the White House State Dining Room. The theme of the room was “Gift of Family.” And up on that mantel were six named stockings. One for each of the Biden’s six other grandchildren.

For Navy Joan, nothing.

I was fired by Master Jill days before Christmas. Could it have been because of my howling over that precious child being snubbed?