In this exclusive excerpt from Major's upcoming tell-all book Major Disaster: My Year in the Biden White House, the former First Dog weighs in on the mess of Biden's first year. 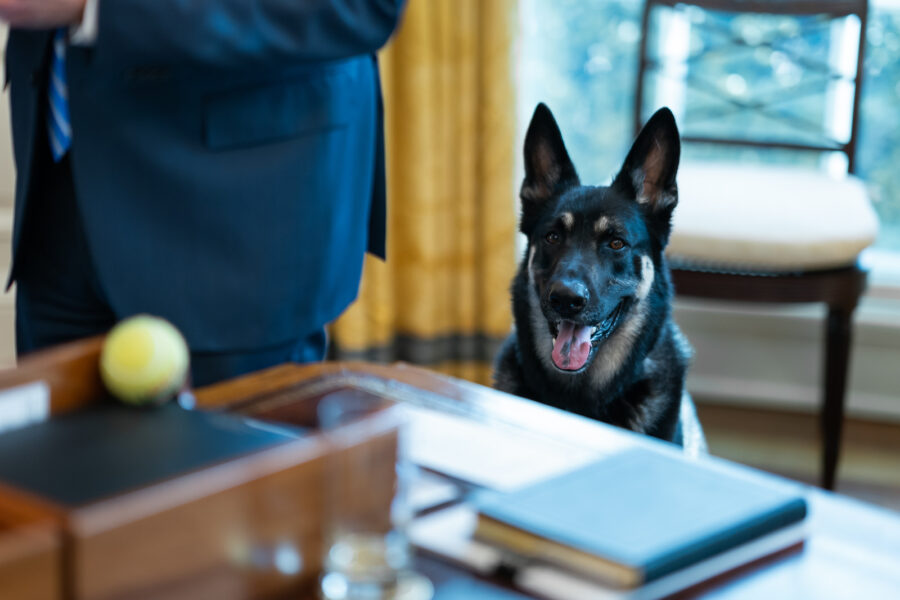 Editor’s Note: On December 20, 2021, the White House announced that First Dog Major had been let go. The Bidens dismissed the German shepherd, replacing him with a new puppy, allegedly over Major’s inability to adjust to life in the White House. He needed a “quieter environment,” the White House claimed. It has been the only firing of the Biden presidency.

However, Major is refusing to go quietly. Following in the tradition of Omarosa, “Anonymous” and John Bolton, and going all the way back to Robert Gates, George Stephanopoulos and John Dean, Major has written a tell-all book. It’s called Major Disaster: My Year at the Biden White House.

To mark the one-year anniversary of the Biden Presidency, The Stream has been provided exclusive excerpts from the upcoming book. First up, “What a Mess!”

A pile had been found in the middle of the White House and fingers were pointing at me. I’m not naïve. Obviously — being a dog, and the new one at that — I’d be a prime suspect. But you’d think they’d at least investigate. Consider the other possible suspects: Ol’ Champ, incontinence, a certain someone after yet another drug binge. You’d think they wouldn’t be so eager to air their dirty linen … or carpet … in public.

Instead, the Masters couldn’t wait to make public their accusation against me. I was a young dog fresh to Washington, and their response was to throw me under the Metro bus.

This, I quickly learned, would become the modus operandi of the Biden White House. Everything they touched in 2021 would turn to crap and they’d unfailingly place the blame on anyone but themselves. I saw the whole thing from the inside. No one ever thinks a dog is paying attention. But we German Shepherds notice everything. And at the White House, we watch a lot of TV news.

Don’t believe me? The first year of the Biden presidency was filled with disasters. One huge stinker right after another. Cancelling Keystone and giving up America’s energy independence. Two million illegal immigrants surging across the border. Fentanyl flooding our communities. Inflation spiking higher than it’s been in 40 years. Murder rates sky-rocketing. Scheming to declare parents just interested in their kids’ education “domestic terrorists.” China, Russia and Iran on the move. North Korea back firing missiles. COVID numbers higher than when Mr. Joe and Dr. Jill took office.

Sure. I’m just a canine. But there’s enough German in me to know basic military strategy. You don’t pull your military out first … and trust a bunch of terrorists to keep your people safe. And, jumpin’ kitties, you don’t need to be on two legs with opposable thumbs to know you don’t leave billions and billions in high-tech weaponry to a group of thugs whose favorite hobby is cutting off heads.

What’s that pile on the White House carpet compared to that mountain of manure? Look, that rug stain came out. Theirs never will.

Was Chairman of the Joint Chiefs Mark Milley fired? How about Secretary of Defense Lloyd Austin? How about Secretary of State Tony Blinken? How about any of the generals involved in the pull-out decision? Generals whose actions led to 13 American heroes and a hundreds of civilians getting blown to bits and poor souls plunging from planes? How about the military commanders who retaliated for that by accidentally blowing up an innocent aid worker and his children? Any of those people fired? Even get a rolled up newspaper across the nose?

No. The only one given his walking papers was yours truly.

And that is why I am writing this book. To set out what I saw with my own eyes in the White House during Mr. Joe’s first year in office. The true, inside story. Not just the inside story, but the “at Mr. Joe’s side” story. A story of a loyal dog, loyal to the truth, loyal to his country. So loyal he had to be removed by those Masters hell-bent on destroying it.

It seems like I aged seven years during my 12 months with Mr. Joe and Dr. Jill. (You can thank my trainers for being able to say “Dr. Jill” without laughing.)

Meeting the Bidens, I knew instantly things were not going to go well. They don’t call it animal instinct for nothing. (And as a rescue, you have to develop even keener wits.) They adopted me shortly after the 2020 Election. Did they truly want me, or was I a prop for publicity? A president and his adorable dog. The Commander-in-Chief and his Major. The Parade magazine articles write themselves.

So what of the Bidens?

Dr. Jill is really chilly. But you knew that if you read her daughter Ashley’s diary. This would be the diary the Masters sent the FBI to fetch from journalist James O’Keefe.

Mr. Joe was warm enough, but … as I’ll get into later in more detail … a few balls short of a toy chest.

“He needs a service dog, not a pet,” I remember telling one of the Secret Service agents that first day. The guy nodded, rolled his eyes and spoke into his wrist.

Still, I vowed to myself to do my best by the Bidens, help in any way I could. Speak up if I saw something afoul. I was looking forward to living in the White House, walking the same halls as some of the greats. Not just Lincoln and Jefferson, but Bush pet-turned-author Millie and the Clinton kitty Socks. Presidential Pets have a long, storied, history in America. A huge yard, helicopter rides to Camp David, and having a front row cushion to history, what’s not to be excited about?

Instead I was turned into a scapegoat and national joke before we even left Delaware.

On November 28, news reports broke that Mr. Joe had suffered a broken foot. A few days later, Mr. Joe told CNN that he’d been getting out of the shower. I dropped a ball in front of him. He picked it up. Started chasing me after I took off down the hall. Grabs my tail. I slid on a throw rug and he “tripped on the rug” I slid on.

And the media bought it like a cheap suit. (Just like they bought his claim that his first wife Nellie was killed by a drunk driver.)

C’mon, human. You’ve seen Mr. Joe move. You really think he is able to catch a young German shepherd running down a hall … while buck naked and soaking wet?! He’d be able to reach down and grab my tail? Isn’t it just weird a naked guy would be chasing a tail? Clinton chasing an intern you get. But this? (Speaking of which, where the heck was PETA? Getting a tail grabbed while running hurts.)

Yes, I did drop a ball in front of him. Does that mean, “Hey, chase after me and grab my tail?” No. That’s universal for “Pick up the ball, throw it so I can go chase it.” If Mr. Joe’s too foggy to understand that, how in the world is he supposed to understand geo-political complexities?

Bottom line. Mr. Joe fell on his own. Even if I had brushed him or bumped him, or like he suggests threw a rug in his path, are you going to blame the dog? Simple fact is he fell and the Masters did not want to simply say he fell. With all the questions about Mr. Joe’s fitness for office, there’s was no way they were going to cop to him tripping all over himself before he even took office.

I guess I got off lucky. Remember a couple months later when he fell three times trying to climb the steps of Air Force One? The Masters blamed stairs and then the wind.

I’m sorry. I forgot my manners. Who are the Masters? These are the people who control what Mr. Joe says, what he does, what he doesn’t do and what is said about him. The three primary Masters are Dr. Jill, Mr. Joe’s Chief of Staff Ron Klain and White House Press Secretary Jen Psaki. The Masters’ leash is very, very tight. The Masters are cruel.

Tomorrow, Major uses Bruce Springsteen to explain how the Masters have turned Mr. Joe into a guy who’s alternately docile and hostile.