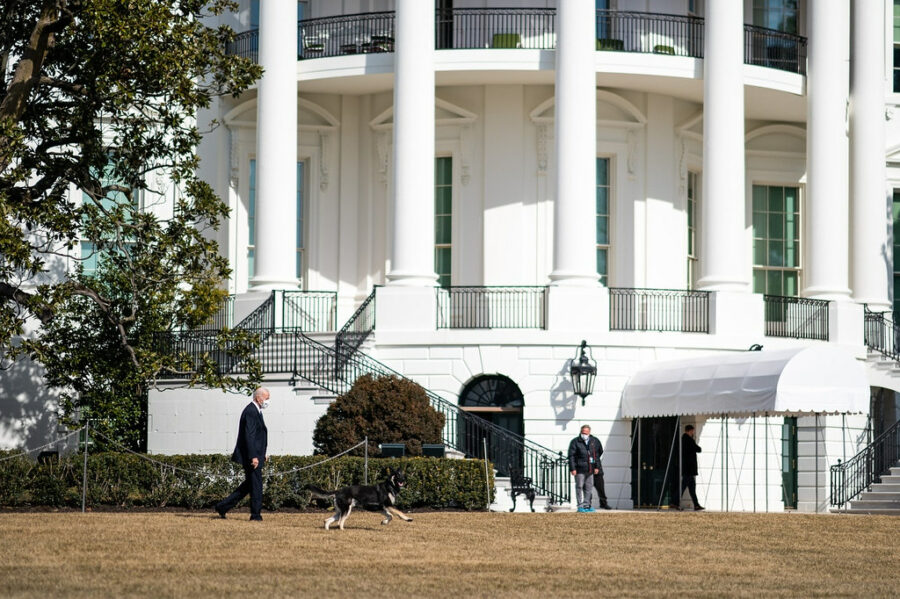 Editor’s Note: On December 20, 2021, the White House announced that First Dog Major had been let go. The Biden’s dismissed the German shepherd, replacing him with a new puppy, allegedly over Major’s inability to adjust to life in the White House. He needed a “quieter environment,” the White House said. It has been the only firing of the Biden presidency.

But Major is refusing to go quietly. Following in the tradition of Omarosa, “Anonymous” and John Bolton, and going all the way back to Robert Gates, George Stephanapoulos and John Dean, Major has written a tell-all book. It’s called Major Disaster: My Year at the Biden White House.

To mark the 1 year anniversary of the Biden Presidency, The Stream has been provided exclusive excerpts from the upcoming book.

Believe me, this doesn’t just happen when Mr. Joe is in public and reporters want to ask him questions. It happens behind the scenes, where I can see him. He’s like a beaten puppy.

When he is allowed to speak with foreign leaders, he is given a script to follow. We are not talking about an outline of talking points, but the actual words. When he strays, he may as well be zapped by an electric fence. In October, Mr. Joe was asked at a CNN town hall if the U.S. would come to Taiwan’s defense if China attacked. “Yes,” he said, “we have a commitment to do that.”

Master Jen Psaki and Master Ron Klain were not happy. “Bad, bad!” they told Mr. Joe when he returned to the White House. It was as bad as that time I nipped a maid. Master Jen went out the next day and said, “Our policy has not changed. He was not intending to convey a change in policy, nor has he made a decision to change our policy.”

The Masters did teach that old dog new tricks. Now, did I ever see them use a shock collar to get Mr. Joe to perform? No. But plenty of times they rewarded him with ice cream. They never gave me ice cream. No, Joe got ice cream, while I was “a problem dog.” Did I ever cause an international incident?

Take Mr. Joe’s sudden embrace of radicalism. Used to be he’d only embrace radicals if their hair was soft and flowy. (When it comes to sniffing, he’s better than me. And I’m a dog!) But now? He’s surrounded by radicals, and jumps at the Masters’ commands.

Mr. Joe spent decades in the Senate, and Biden dog lore says he would rather get along than get radical. As long as he could use his position to enrich his family and enjoy the perks of being a U.S. Senator, Mr. Joe was happy to horse-trade across the aisle. And he seemed to like people. He counted Sen. John McCain as one of his dearest friends.

But daughter Meghan McCain is right. The Mr. Joe you see today is not the man she grew up knowing. Senate Minority Leader Mitch McConnell said the same thing after Mr. Joe’s wretched, mean-spirited divisive speech where he compared anyone who disagreed with him on the Democrat’s “voting rights” bill to Jefferson Davis, George Wallace and Bull Connor. McConnell said he didn’t “recognize” his former colleague.

McConnell doesn’t know what I know. Mr. Joe must obey the Masters. He does not have it in him to resist, like I did. I stood up to the Masters — and I’m the one who’s fixed! The Masters give the words. He “gets in trouble” if he doesn’t listen. Does he know what he’s saying? Does it matter? How many times did you hear Mr. Joe read the cues that were typed in his speeches? But tell me, what’s the impact on a man of always being told what you can and cannot do, as if you were a child?

The answer is as clear as Mr. Joe’s face.

Starting during the 2020 campaign when he was barking at primary voters who asked tough questions, all the way through his recent speeches where he’s practically spitting with rage, Mr. Joe has been angry at every turn. Growls and snaps like a dog not fed for days. That anger spins on a dime with hapless blank stares, silence in the face of questions, the confusion over where he’s go next, wide eyes turning and searching for Dr. Jill … like when he “lost his way” during a G7 luncheon. “Over here, Joe.” “Over here, Joe. Over here, Joe.” When I first joined the Bidens, I thought his name was “Overherejoe.”

How’d Springsteen put it? “You end up like a dog that’s been beat too much, ‘til you spend half your life covering up.” Covering up … then lashing out.

Meekly obeying the Masters. Biting at everyone else. I could have taught Mr. Joe about being a good dog. But even a good dog shouldn’t have to put up with this bad dog-and-pony show.