I’ll Never Take a Knee, But I Will Reach Out My Hand 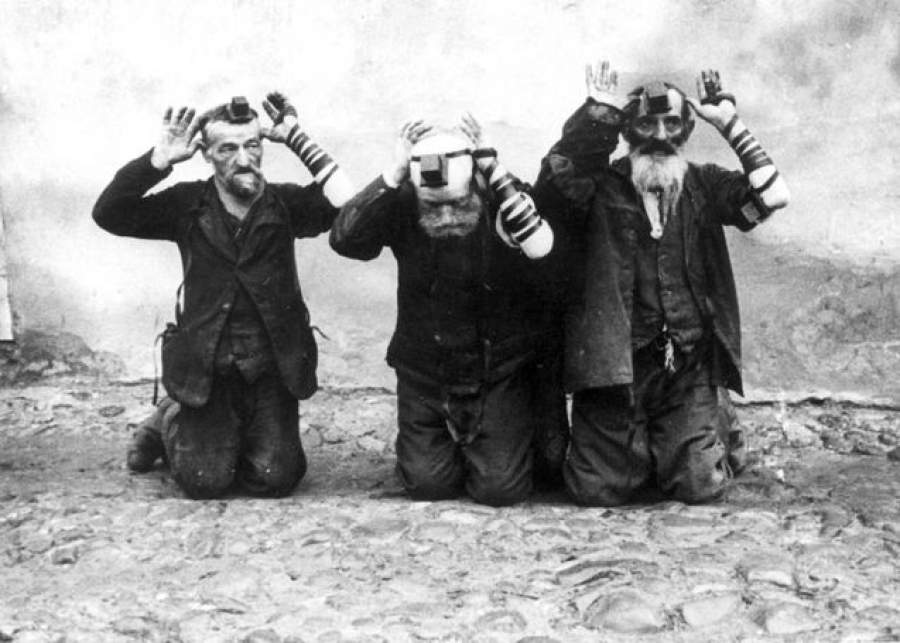 Jews in Poland forced to kneel by their National Socialist tormentors in wartime Poland.

I was chilled to the very bone by the images I saw of policemen and national guardsmen taking a knee in front of Black Lives Matters activists. These are the forces of public order, the State. They’re our last line of defense against mobs of rampaging looters. If they stand down, and refuse to follow orders, we’re on our own. Worse yet, if they side with the mob, the whole game is over.

It’s true, President Trump could send in the U.S. military.

But would his underlings carry out his orders? The whole Kabuki dance General Mattis is performing to seduce our media makes me … worry on that score. Is he trying another coup against Trump, this time by signaling serving generals not to follow lawful orders?

Whatever his military record, what Mattis is doing to the president now at a moment of national crisis should sicken American patriots. Compare how the left now fawns on Mattis with their treatment of innocent General Mike Flynn. It shows you what happens to those who cooperate with the Deep State, and to those who resist it.

What if that worked? If the Army stood down too? Then what would we be left with? In free states where the Second Amendment is actually still in force, you’d hope for citizen militias to organize themselves. Block the entrance to shopping malls and neighborhoods. Maybe guard their own churches from harm. I certainly hope that patriots across the country are organizing for that grim, last necessity.

What exactly do the rioters, and the protesters who give them political cover, want? They don’t know, or refuse to say. They know they have the whip hand. Why limit their demands?

But it’s in the very blue states where mayors are standing down the police (or threatening to dissolve them) that gun bans have mostly happened. My old friends in New York City would be absolutely helpless, dependent like Sohrab Ahmari of The New York Post for their families’ safety on … the courage of their buildings’ doormen. I’ve worked as a New York City doormen. They’re neither armed, nor trained for crowd control.

What exactly are the citizens of Minneapolis supposed to do, if the city really does dissolve the police?

Our Very Own Red Army

And what if police or military units, led by opportunists or carefully planted leftists, swap flags and join the radicals? Remember that the long national nightmares of the French and Russian revolutions really began at the moment when the military switched sides. The relentless propaganda against our country and institutions, blared out of most media and many church pulpits might help accomplish that. The blood libel against our country that is the 1619 Project has told millions that our very flag stands for slavery — a claim that would have confused liberated blacks in 1865.

Speaking of the Civil War: We’d then be in one. Not even a neatly regional one like last time, but something much more chaotic and savage, more like the one fought in Spain. And there’s no guarantee that the good guys would win again this time. The fact that most private firearms are held by constitutional conservatives gives me some hope. But who wants to put that to the test?

Their Demands Are Secret. Ask Yourself Why.

It’s madness that I’m having to write what sounds like a bad end-times novel to talk about current events. That our cities are burning thanks to carefully pre-planned and stage-managed chaos. After all, the policemen who abused George Floyd and caused his death are all in jail. Facing serious charges, as they should be. So what exactly do the rioters, and the protesters who give them political cover, want?

They don’t know, or refuse to say. They know they have the whip hand. Why limit their demands? What if we met them? Would they then have to go home, suspend all the fun, stop collecting flatscreen TVs and couture dresses? I faced violent bullies as a kid. They don’t want to stop hitting you. They don’t want your lunch money, they want your absolute degradation, your total surrender.

And that’s what taking a knee means, whatever fools tell themselves. It’s surrender in advance to a secret set of demands, which will be named later once the far left has us tied to the chair in an interrogation room. But students of history don’t need to sit in suspense. We’ve seen in Cuba and Venezuela, in Cambodia and China, how the radical left wields power. When radicals in America talk and act exactly like their forefathers and role models, we know precisely what to expect. Secret arrests and public denunciations, show trials and murder squads, “struggle” sessions and slavery. Real slavery, here and now, and applied to the whole population, except a corrupt elite.

I am glad to extend a hand to any patriotic citizen who wants to diminish police violence against civilians. I won’t listen to gibberish about “systemic racism” or “whiteness.” Those are just buzzwords covering falsehoods and long-discredited claims. They’re crafted to fool the naïve, intimidate the weak, and goad the mob. We’ve seen all the left’s tricks before, and there’s zero excuse now to give them one more shot at building Utopia out of their victims’ bones and skulls. Pastors or prelates who collaborate with these radicals have betrayed the gospel, and us.

But Utopia isn’t the point for the real radicals, the ones pulling the strings. Power is, the power to dominate and terrorize their neighbors. To repay the godless universe they think they inhabit for every petty frustration they ever suffered.

If you want to break some eggs, you must claim to be making an omelet.