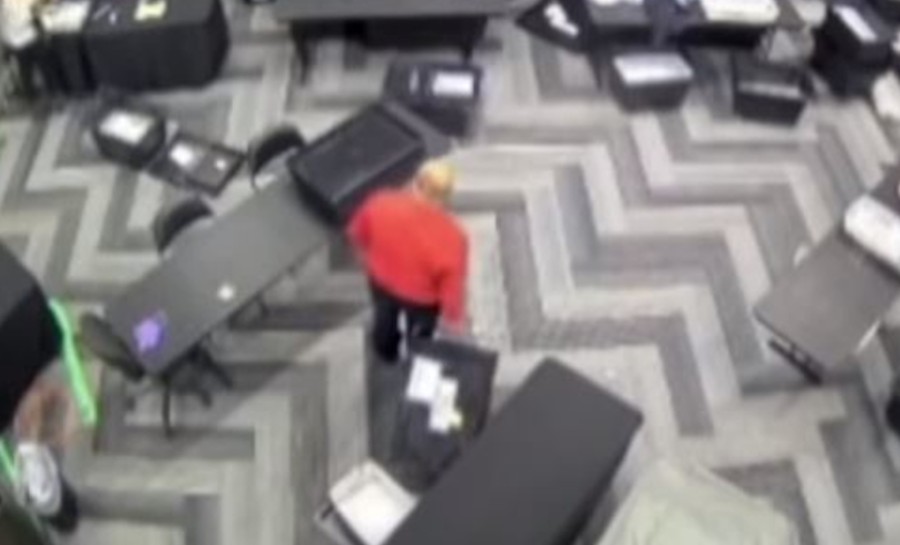 Video footage shows a few poll workers at State Farm Arena in Georgia staying behind after poll watchers and members of the press leave for the night, pulling suitcases of ballots out from under a table and counting them.

We’re told, over and over, from media outlets and social media platforms, that claims of voter fraud in the 2020 election are “baseless” and “unsubstantiated.” Twitter flags every article alleging voter fraud, and even stories about allegations of voter fraud. Hostile news stories may even put “voter fraud” in scare quotes.

Despite this relentless media campaign, there are now scads of evidence of fraud. This evidence is far more robust than anything the media used to keep the Russia collusion hoax alive for years. And it’s far more robust than the uncorroborated and contradictory “evidence” the press used to try to destroy Brett Kavanaugh’s life. There was never any evidence, for instance, that Kavanaugh had even met Christine Blasey Ford.

The most visually sensational evidence of election fraud is the time coded security video footage from the State Farm Arena in Georgia. Democratic counters sent home Republican poll watchers and members of the media, claiming there was going to be a break. But four stayed behind, and later, when no one was watching, they appeared to pull cases of ballots from under a table (which one of them had set up that morning) and started counting thousands of ballots, for hours.

We have sworn affidavits from the Republicans that they were told to leave. And on the day in question (election day, November 3rd), the media reported that counting stopped at 10:30 pm.

This is a visual age, and there’s nothing like security video showing what looks like nefarious behavior. But at the moment, we’re still groping for exact details. Some officials are denying anything untoward happened (as they would). Perhaps it isn’t what it appears to be. But press “debunkings” of the story, so far, consist of quoting election officials — the very ones accused of incompetence — or claiming the containers holding the extra ballots weren’t “suitcases” but rather … ballot containers. Big deal. The fact that they’re even disputing such a trifle is suspicious.

In any case, this is prima facie evidence.

Of course, many observers suspected fraud on election night. We all remember when vote counting in several battleground states suddenly paused. The media’s fishy explanations — a plumbing leak, vote counters needing to sleep, etc. — only confirmed the suspicion.

But the evidence goes far beyond fishy smells. The best evidence of electoral fraud is mostly in the form of sworn affidavits and testimony from on-the-record eyewitnesses, whistleblowers, along with (often confirming) statistical analyses of events. Statistics can help us tell if some event is far more likely to happen by fraud than by chance, even if it can’t tell us how the fraud happened.

Focus on this evidence. If juicy video evidence appears and stands up to scrutiny, fine. But don’t be distracted by eye-catching visuals.

And don’t suppose that a lack of video evidence means much if anything. Remember, murders happen every day. We almost never have video of them happening.

Finally, be skeptical of everything. If some Democrats committed fraud in the November election, they would be smart enough to anticipate some of this would be detected. Thus, they would be smart enough to seed social media with sensational examples of fraud that they know conservatives would pass around and retweet. And then, when those were debunked, the complicit media would use this to paper over solid, but less catchy evidence.

Try Searching These Phrases on Google, Then on Other Search Engines

Here’s the reality: the media and social media are suppressing and burying the best evidence. We’ve watched articles and stories get buried by Google in near-real time. Twitter and Facebook have been utterly shameless in censoring and misdirecting users.

You can see the result of this social media “curating” by looking for relevant stories on Google, Bing, and Duck Duck Go. For instance, Google “Pennsylvania hearing on voter fraud.” (Google is by far the worst.) You’ll find many, many “stories” describing Trump cancelling his trip to the hearing, and “rambling” when he called in instead. Note how hard it is to find a straightforward news summary of the content of the hearing. It’s almost like Google is trying to keep you from finding such information.

Or, try to Google the excellent summary of suspicious anomalies published recently in the US edition of the (UK) Spectator. I’ll even give you the exact title of the piece: “Reasons why the 2020 election is deeply puzzling.” Note how long it takes for Google to provide a direct link the article itself (as opposed to recent pieces that make reference to the original, which Google hasn’t yet buried). If you didn’t have the exact title of the piece, you might as well be searching for a microscopic needle in the mother of all haystacks.

Next, try the same search at Bing, for a different experience.

For a real hoot, search for “the very best evidence of electoral fraud 2020” on several different search engines.

Another example: Search for the phrase “widespread election fraud.” The press has filled the infosphere with that word “widespread.” But of course, the best evidence is election fraud is highly concentrated in a handful of cities and counties dominated for decades by Democratic machine politics.

One final example (we could do this all day): Search for “Donald Trump, electoral fraud speech, December 2, 2020” on any search engine. Notice the relentless bias.

Here’s one version of the video without a biased title (at least until YouTube pulls this version).

Now multiply this experience with search engines ten thousand times to get a sense of how social media and media in general have worked to bury evidence of electoral fraud. This is, in effect, an information propaganda campaign by virtually the entire establishment in control of the flow of information.

If You Want to Know About Evidence of Election Fraud and Have Only a Few Hours, Start Here

But even without this media censorship, how does the average person discriminate between good and bad information? In the last few weeks, a ton of bogus and misguided claims have flooded the relevant channels. These are sticky and more likely to get shared on Twitter than more solid but less sensational information. And even some sophisticated statistical analysis falls apart on closer inspection.

As a result, it’s hard for most people to find reliable sources, and to separate the wheat from the chaff.

So, here’s a representative sample for the honest inquirer, who doesn’t have countless hours to research the subject. (We’ll update this piece periodically, so you might want to bookmark it — especially since it will likely get buried or labeled on social media.)

There’s really no substitute for watching the videos of the state hearings themselves (links below), but this requires many hours and the testimony varies on quality. Short of that, at least spend a few hours reading the following articles, including summaries of the hearings. If you do that, you’ll know more about the evidence of fraud than anyone that relies on their Twitter feed or CNN for information.

You’ll also know that when media and social media tell you that fraud claims are baseless, they’re either lying or negligently uninformed.

Michael Pakaluk, “It’s Not Over,” The Catholic Thing

Patrick Basham, “Reasons why the 2020 presidential election is deeply puzzling,” The Spectator (US)

Vote Integrity, “Anomalies in Vote Counts and Their Effects on Election 2020”

Whistleblowers on disappearing and backdated ballots

Al Perrotta, “Where Did Joe Biden Get His Five Touchdowns From?” The Stream

Video of hearing on December 1

Video of hearing on December 2

Video of hearing on December 3

Al Perrotta, “#ElectionSteal: Call Me a Crank Who Believes in Liberty,” The Stream

Scott McKay, “Five Quick Things: No, You are not Crazy,” The American Spectator